Still NO RESOLUTION on Min/max

The update is here, the update notes are out. Albeit some slight nerf to Flatline and Ifrit.

That said, what about any resolution to Min/Max. The proposed brawl draft system, Imho does not address the min/max issue.

There has been multiple suggestions and feedback on this matter. However there seems to be no steps from devs to address the issue. 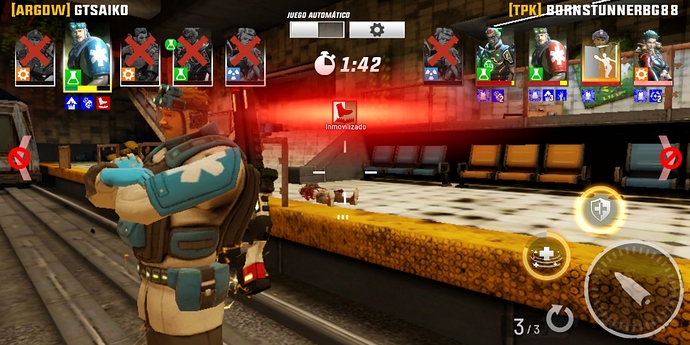 Min-max is only a small issue now. Not getting what we bought every month seems to be the only thing we need to worry about. I think SCAMMED is the best way to describe it.

I know I’m running a min max team, but those matches are impossible to play for anyone playing normal, and I face this with my normal non min maxing team around 7* gold too 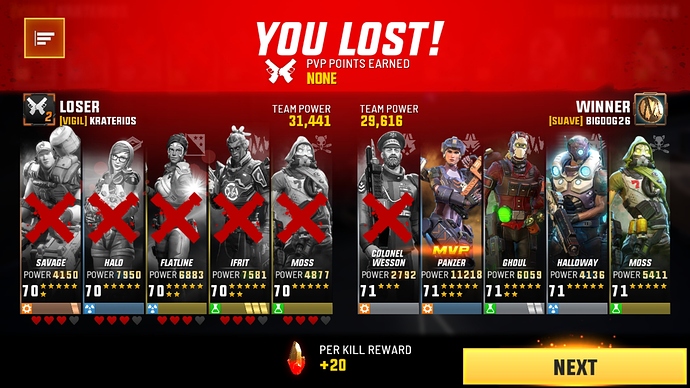 PvP Matchmaiking requirement before you could start a match:

There could also be limits on how and when you could upgrade a heroes star level:
You can’t upgrade more starts with the following requirements:

To implement this all 10 star Gold get downgraded to 9 star, you still keep the fragments in that hero and for these there will be no cash cost to upgrade to 10 star again when it’s reached platinum later, it would then show 1080/1080 on the heros fragment list. Another Example for an earlier 9 star silver with 200/1080 fragments would be downgraded to 7 star with 200(+600+360)/1080 = 1160/240… once gold you could directly upgrade back up to 8 star. The only exceptions in the game is then Artemis and Prophet which start at 7 star. If skills is not taken out of the PvP matchmaking system it could also be adding requirements to skill upgrades. To be able to go to 8 star you both need gold and that both skills are at minimum 50 as an example…

PvP fix was" ** the thing** "I was hoping on most this update, as did many other people I’ve spoken to and reading the forum or chats.

I agree with a lot of points… but 8* for gold is way to much for new players this is in no way possible for them, same with plat, and since a lot of players already surpassed this it will be unfair to everyone.

Besides that, spot on

I don’t think new players would get fragments to upgrade a hero from 7 star to 8 star before they could farm enough items to make the hero gold… I can’t see it being unfair either for those surpassing these levels, they will be downgraded but still keep the fragments in that hero which was earlier spent, they just need to upgrade that hero to e.g. Gold before they can reapply the upgrade back to 8star and higher.

Maybe I didn’t make my self clear… The hero need to be first upgraded to a certain level before you can then evolve that hero to next star level. All heroes can be upgraded to e.g. platinum as a 3 star… but it can’t be upgraded to 6 star before the hero is made Silver.

Nailfox it would be far smarter to just make a maximum power gap for PVP teams and have the system automatically either “boost” the lowest hero(es) or “nerf” the biggest hero(es) until the gap is shrunk to an acceptable minimum.

Your system just makes a bunch of obtuse rules that would just open the door to new min/max techniques. My absolute BEST min/max team (99%+ winrate) would some minor tweaks (1 star to one hero, 5 levels to another) to meet your requirements. While I have flexibility with spare frags, cash, and levels - I can’t fathom how burdensome it would be to have people have to tear their teams apart every time they wanted to PVP.

I’m for nerfing a hero down to a set point when starting a match.

I understand you would not like to see those changes being a min/maxer @Sogui but I’m 100% certain that would level the playing-field a lot with min/maxing at 20k-50k. The min/max is not a problem I face myself but I can understand the frustration only playing mid level PvP being ripped apart. I believe clear rules set for all to follow is in the long run a lot better than adjustments made for heroes during each match where a lot of people won’t understand the changes.

I’d like to jump here and say that we have a group focused on addressing the min/max issue. It’s been a community hot-topic for a bit now and we are working on addressing it.

But thats just me hating 4 heals and panzer. XD

That’s great to hear. Any word on possible solutions they are looking at? Or any thoughts at all on the matter?

Like I said in my post, if I added 5 levels to my Mandrake and 1 star to my Heimlock it would meet all your requirements for “no minmax” but it would barely make a difference - I’ve been considering adding some power to those two anyway.

Power is far easier to understand and implement than a bunch of weird rules about how many stars and promotions your team can split. With your system you could still use a 9* plat 70 Dogface with a bunch of 7* gold 60 healers - which is pretty much exactly what people complain about.

A power gap limit that scales with your team’s total power would be far more practicable and effective.

I’m 100% certain this would do just what it intended to do, and I don’t think your input to how to address min/maxer situation is other than trying to save a way to powerplay against weaker players.

I actually think you gave me a very good reason to edit the requirement with max 5 level difference, and I think I just hit the nail on the head

PvP Matchmaiking requirement before you could start a match:

@Nailfox, why is hero levels even a thing? Just make it such that your PVP heroes have to be at your Team Level, period.

I don’t see any downsides at all.

In fact we get so much (unwanted) Hero XP dropping from the sky that surely, we can level up our core PVP teams (only about 10, maybe 15 heroes) to our Team Level.

Plus maybe another 10 (if at all!) for PVE. Nothing objectionable about that at all, is there?

We’re not short of Hero XP to build up 30 heroes, max - I dunno about your case but I have never seen any recent post from any players saying we have insufficient Hero XP.

By giving players leeway about PVP Hero level, it would make it that much easier for players intending to min-max to artificially calibrate (lower) their power levels. There are people running around with level 42 and level 50 9&10 star decks when their team level is 68-70. Just keep em honest and make them play PVP at their team level, full stop.

Sorry I forgot to add… other than the Team Level thing, I agree with most of your suggestions and would support the changes u proposed.

Hi Sing, I have no problem with Heroes level being the same as your team level, I just wanted to add some flexibility for newer players and for others when there are new levels just after an update like we have now.

I try to read soguis comments, but I can’t take it seriously anymore, he doesn’t reply, just repeats the same min maxing spam again, starts talking about dogface or panzer, and then your post gets flagged for calling him out.

This starts to get so annoying that I don’t really want to post anymore.