News & Announcements Hero Spotlights
Huginn August 31, 2017, 7:00am #1
This series will highlight the variety of Heroes in Hero Hunters and showcase their role, design, and synergy with other Heroes! This spotlight centers around the upcoming Hero, Baron! 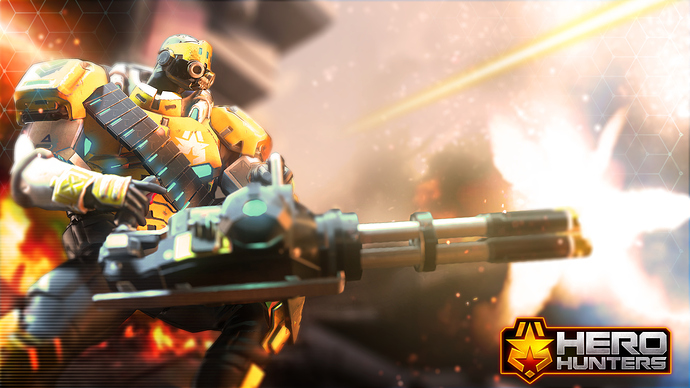 Baron is the king on the battlefield and a great fit for any UAF fire team. He’s a beef-cake who excels at demolishing cover and providing suppressing fire for his allies. Baron is a valuable and adaptable squaddie.

As part of Butter’s re-tooling, we have split the core components of Butter’s original kit into two separate Heroes who will cater to different play styles. Baron offers an aggressive tanking alternative, dishing out spikes of damage quickly, and will often be the center of attention. Use his Taunts and high damage output to draw fire away from a vulnerable teammate.

Covering Fire sprays a spread of bullets, hitting large numbers of enemies. The number of shots is distributed evenly among the enemies, dealing higher single-target damage when there are fewer enemies on the screen.

Center of Attention provides Baron with an invaluable team bonus buff. Ally Heroes will gain bonus Health whenever an ally drops below 50% Health and Baron will Taunt enemies. If Baron was already Taunting before the Center of Attention effect activates, he will gain bonus Health as well. This passive ability keeps your allies alive longer by forcing your enemies to attack Baron first. 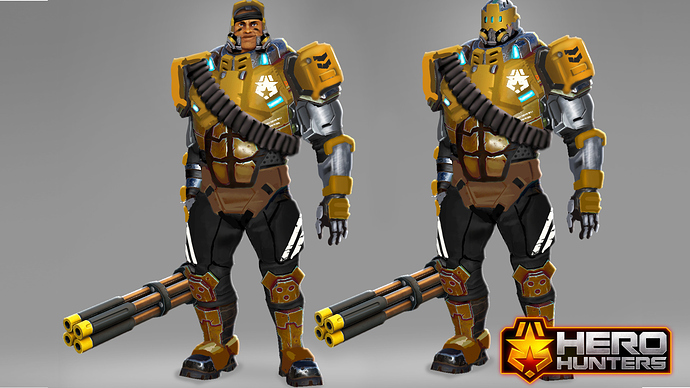 What do you think of Baron?

But we wana see more about HALLOWAY!!

We’ll be releasing more on other new heroes soon. I’m glad you are excited for Baron. He’s a lot of fun!

Is he an energy hero?

He is an Energy hero.

I’ll make sure to call that out better in the future!

Looks legit, only time can tell if he’s gonna b any good.
I’m still hoping some other issues will be fixed first before we go all overboard with the amount of heroes. And don’t get me wrong, I understand it’s a way to make good money for you guys. But still…

From now i can wait… Got all heros give me that update!

Hope Halloway is that cool i think!!

the model is awesome.

I really love how this particular spotlight was handled. I agree if we could see other heroes done like this in the future it would be great.

As far as Baron is concerned though. PLEASE look into buffing him and fixing his skill. I really want to like him, but he is so disappointing for being a front line hero. He does not have enough defenses or damage reduction for him to be healed in before his taunt automatically has him hitting the floor. And he doesn’t have enough damage to compensate for it either.

Can’t agree you more. Please fix it, or on one want to use him.

@RequiemPrime. What in particular do you like about this spotlight?

I will mention this post to the team members who are best suited to review this hero feedback.

Honestly? I like EVERYTHING, lol. The detailed Synergies and Powers explanations. The concept art. And the fantastic 3D model view which shows off the incredible amount of details and care that has been put into the characters. Really excellent stuff.

Oh and the Wallpapers are also very appreciated.

Yeah, at the time I had posted, I wasn’t aware the Hivemind was UAF ( I haven’t noticed the UAF symbol anywhere on him, but suspected it). But found out during the UAF vs. KLG event.

Could you possibly suggest some heroes that would work really well with this upcoming hero. It would really help me be able to use the hero effectively and help to see if my team will need him

This “upcoming hero” is already on the game. This post is kinda old (Aug 2017)

You can farm this hero on sectors 4-5 (Hard mode)

Now, answering your question, he has two taunts, so he is going to be focused by enemies. This means he needs at the very least one strong healer to be alive, or he may get destroyed too fast. Given how easy he breaks covers, he is beast paired with Keel (heals team on cover destruction). People also pair him with Halo because their plat skills work really well together.