I hesitate to post this because of the responses I’m expecting from trolls. I think it needs to be said though.

I have had a number of “Special Offers” pop up lately. A number of these popped up when Bounty started - at the time when most everyone was unable to play due to some bug that indicated we needed to upgrade when we already had (speaking as an Android user).

The cost and the timing of the appearance of these offers is incredibly frustrating considering:

a) I’m VIP 11. I’ve spent a lot of money on these games, so how can these (screenshots attached, click on it to see the 5 offers I’m referring to) offers be considered “special offers”? To buy them all would cost $329.92. I understand I don’t have to buy them - but there are some I would consider buying if the price was reasonable. These are not reasonable.

b) Chat hasn’t worked in what seems like weeks. Alliance Wars started and there is virtually no way to communicate for strategy unless your entire team is on Discord (which mine is not). I believe that if chat had been fixed before AW started, our team would have way more points than we currently have.

c) Bounty began moments before the iOS update was available. I get that it isn’t your fault, but in this situation, Bounty should have been postponed if you don’t know the time table on the iOS release. Either that, or hold off on updates for Android and iOS until Bounty is over.

My point is this: There are and have been a number of issues with the game lately. To ask us for money at a time like this does not make you look good - that you care about income more than fixing the game. To me, seeing these offers when there are unresolved issues feels incredibly disrespectful and insulting to those that have spent so much time, money, and effort into this game.

Why charge us 5 times more gold for the same number of frags compared to a free-to-play player? (eg the recent yeager frag offer, VIP 0: 199 gold for some yeager frags + free 225 frags for other heroes. VIP 15: 1199 gold for pretty much the same freebies with slightly more yeager frags)

Also the rewards for alliance wars are pathetic. U get a whopping 4 to 10 Kurtz frags for being top 3 in each war. Safe to say that I would not be unlocking Kurtz this way

Time to spend some cash to unbox a thousand crates for Kurtz… oh wait, if I buy VIP, I won’t be enjoying these vip 0 cheap frag offers anymore, hmm…

I would love to see the raw statistics regarding how well sales go for high VIPs versus low and non-VIPs.

“In the future”. Don’t call it a bluff when you don’t know the expected timeframe.

Pretty much this. We don’t give out timeframes due to how long it can take some things to happen. Please don’t assume “the future” means “two weeks.”

They update things again yet what the game needs most of all seems to be missing. Update to gauntlet, they said it coming well before last level increase to 85 now we have 90 and no extra cash etc to increase game skills etc I’m VIP 13 and until they fix this I’m only buying monthly £4.99

In alliance wars they have already developed an algorithm to simulate battle results… all that needs to be done is to push the same algorithm to gauntlet mode to get the win/loss result and that’s it.

Key in 5 heroes per sector, press ‘PLAY’
Algorithm kicks in to decide whether win/lose
If win --> accept result. If lose —> player decides accept or discard result, as per normal.

So your suggestion to make gauntlet good again is? I’m curious!

For an easy update add more levels. That would add much needed cash and a few extra gauntlet Crystals. Something to mix min event and current gauntlet system be nice maybe with hero bosses you gauntlet stage one but to pass you have to beat random hero bosses etc

There is no definite timeline on Gauntlet. We did not promise it at any specific time, or before any specific feature. Check that topic again! 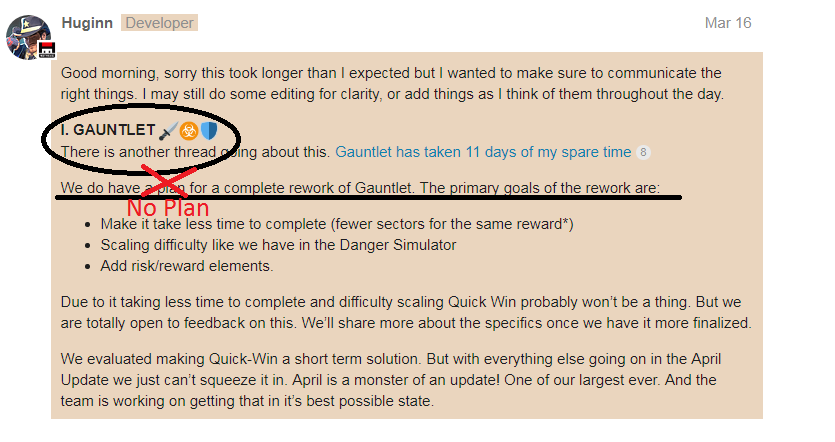 Hahaha… u are right. They might as well have said that they had NO PLAN, at least pple won’t be disappointed time and time again

There’s more text in that image. You chose to highlight an odd part!

Unfortunately, it’s not our position to argue. If you feel we have no plan for Gauntlet, then you’re free to believe that.

Even though I am not so fluent in the English language and do a lot about a translator, I still hope that you have noticed my sarcasm, if not apology.

Complete text (That was all about Gauntlet)

I see the following, a plan, a solution and a timeline:

Timeline:
But with everything else going on in the April Update we just can’t squeeze it in. April is a monster of an update!
-> (What was not possible in April should be possible in May)

There is no definite timeline on Gauntlet. We did not promise it at any specific time, or before any specific feature. Check that topic again!

Why are you addressing something as a developer, even making suggestions about changes, which incidentally was positively received by the community, and then that was it?

If that’s your assessment of what we said, you’re welcome to your opinion.

You can’t really decide for Hothead what is and what is not possible to get into the May update. It looks like you are trying to make up your own version just to use it against the company and hurt them. Just stop. They never said anything about May in their statement.

The only time frame was “not april”

Since they said they couldn’t squeeze it in the April update, I’m not concerned about Gauntlet at this immediate point in time, because they gave an actual plan. Saying “we cannot implement this feature in the next update” is better than just saying “its coming soon”, so in that regard I believe the devs are doing a good job.