Times are tough… Praying we get out of this recession soon… Lol
Just curious is anyone or has anyone ever been more broke than this?

This is probably the least cash I’ve ever had. 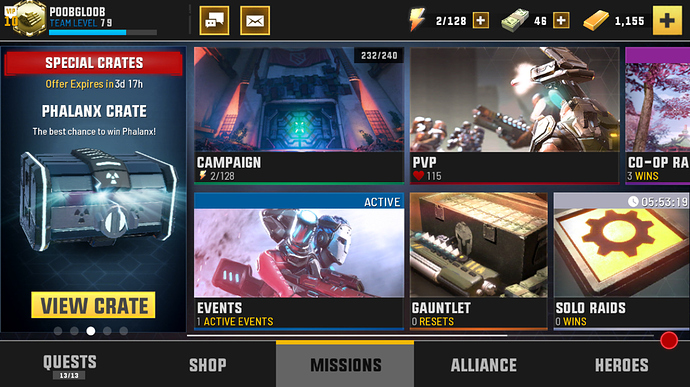 I have 1000 stamina and 10 million bucks! I would trade all that for your gold.

Gold is not hard to accumulate, you literally don’t spend it on ANYTHING else but 10x crates, no matter what…
Cash on the other hand, not so much.

I’m still refusing to level my heroes up to 80 until I have like 100 million bucks to make a great bulk-leveling up. Also saving up stamina for the new hero (when does he come!?) which is a very bad method of playing the game but I know if I don’t do that I will sit on launch day and buy stamina refills.

The new hero will be released in about 2 weeks. You want to save your stamina that long?

Yeah thats a pretty horrid strategy, to just sit on that stamina without spending it… All that time you’re sleeping or away from the game, not only is your stamina income at a halt, but also your XP, cash, and especially your item income. If he doesn’t come out for another 10 days (hypothetically), you are potentially missing out on 10 days of stamina rejuvenation, as well as the items that come with it, if you would just spend what you had.

Best strategy is to just use up all the stamina you have to stalk up on common bronze, silver, and gold frags needed by most heroes, (without using them to equip on other heroes), so that you have every item needed beforehand to take the new hero from green to platinum in a matter of minutes…
That’s what I do in the lull time before they release a new hero…

Whenever you are above the maximum capacity of stamina, the only source of stamina you can get is either through Events or Gold, which is ridiculous.
In the meantime (10 days) we get 1 stamina every 3 minutes… MEANING that in 10 days, (considering we never let our stamina fill-up completely as to where rejuvenation stops) we would rejuvenate 4,800 stamina…

So, you could either sit on that 1,000 stamina over the next 10 days (give or take some including events), or spend it and regenerate nearly 5 times that amount with nearly 5 times the amount of items/cash/XP you’ll need by the time the new hero is released.

That is what I do, if I have no idea how to continue.
I usually go for stars, pistols or large bullets are never wrong either. If you do not need them for the new hero, you can use them on your other ones later on too.
You level up the new hero on two or three days anyway, even without stamina fill ups, so don’t waste the ones you get for free. Just keep the stamina you get from events.

So I can make him platinum right away.

I obviously have 10 millions more bucks than you do, and for me it’s a thrilling fun to get the new hero maximized ASAP so I will gladly sit on my growing stamina pile and unload it all once the hero is launched. Items aren’t a problem, I have so many.

I’ve also stopped leveling my hero’s, I’m a afraid of being punished in pvp by not upgrading my skills.

I’ve saved some bucks but I reserved those for bounty spawns, others bucks I want to save for evolving hero’s, I’m stacking fragments so I will need a big load of cash when I have them completed

Thought about not leveling my heroes because of the punishment too. But since many of my heroes don’t have maxed out skills anyway and the matchmaking is still quite off I don’t think 5 levels make that much of a difference.

I just hope that Mins danger simulator will provide some cash

I’ve brought my heroes to level 80 but I can’t work up the courage to start getting skills up from 75… Sitting on 17m bucks right now but gotta save up for dem sweet bounty summons.