Something needs to change in PVP

One of the things that should be considered in pvp is Hero Level, Character Level AND Power Level Consistency among the 5 Characters. Facing a single lvl 70 character while mine are still at 40 is relatively unfair. The skill levels doesnt matter at this point because the normal attacks are ******** 1-2 burst hit cannons.

Please dont brush this off, because this is what I feel is a legit reason and people are abusing the system to get easy pvp wins and it isnt setting up a competitive atmosphere. There are many ways to resolve this, I have some ideas but I don’t know if I should share if I’m not sure if I’ll even be heard…

Agreed, just unlocked panzer today, fighting at bronze rank all hero’s and farmed so much frags, one of the few matches I completely lost was against a green team lvl 60 with a prophet and Artemis in it

This topic is already being discussed in other earlier threads that is still on going.

@Cool_hand Not exactly, he’s talking about the weird matches and panzer at the same time

@Kraterios, I don’t know, I feel it’s similar to the abuse of either running ONE high level and high star hero with the rest being Low levels. I don’t usually max out all my hero characters, having said I get match up with opponents with Max out level teams …

Yeah I was joking, I’m not even going to send screenshots anymore 5k with 11k hero’s non stop

What’s funny is when I try these exploits myself I didn’t get a better win / lose ratio than when I’m trying my best with my best team against equal teams.
I’m matched in a manner that punishes me (with all right to do so).
Maybe the inconsistencies in it all makes it hard for the developers to pinpoint and solve the probelm?

Also tried that, I’m lucky if I get 2 kills

@ULFPAM When playing PvP its important that you kill the dangerous opponents first, and that you control the best hero to kill that opponent, then you switch next hero to kill and again reevaluate which hero to control. And playing on Auto reduce your chance of success with at least 50%.
PS: The 2nd match should have been an easy win, while the first match was more difficult.
PPS: And maybe bring a better healer than operator, it takes too long time before he can heal anything.

The more you play the better you get. Good luck & happy hunting.

Hello.
I wasn’t trying to play good here, I was just trying to exploit the matchmaking system. Many players report that they are facing unfair matchmaking against players who use 1 strong hero (in my case Panzer) together with a bunch of under-developed ones. What my pictures ought to prove is that when I try this exploit I am not successful / not getting the 100% win ratio (which in extent proves that the system is good at putting exploiters up against punishing enemy teams.

My regular PVP teams are much more balanced.

To be honest, that’s not exactly balanced, 9* plat with a 7* gold

While I agree that it isn’t a perfectly balanced team by any means, it’s still about as balanced as you can hope for from regular progression. It doesn’t make logical sense to level your heroes up through the gold tiers altogether since it’s a much longer ROI than bring them up to plat one at a time, which I’m assuming is the case here (as with myself).

It’s what I have, what the game gave me. My option is to not play PVP with my best heroes at all or to stop investing in the heroes I wanna use definitely. So if your claim is that my team is not balanced, my response is that my team is completely normal.

I have several times questioned your claims of unfair matchmaking since the teams you show as examples are all relatively nornal in balance. If you are looking for PVP matchmaking that gives you the exact same team-power as you and if you are choosing your PVP team long and hard to make it perfectly balanced in stars / power / etc. instead of building the best possible teamz maybe that is the root of the problem you are experiencing?

If I should build a balanced PVP team I shouldn’t be able to use any of my Platinum or highest evolved heroes.

@ULFPAM, that’s why I said no personal attack haha
(No I don’t want you to stop playing PvP, I just don’t understand what’s going on, if I use a higher hero I get punished hard, yet I see my enemy use a 14k with a 5k hero)

but it’s hard to balance, my 9* plat Nightingale has the same power as my 8* plat keel, if I use these 2, I get to fight 14k hero’s, so I’m wondering where it’s going wrong, is it power? Is it stars? Is it skills? Is it gold/plat? 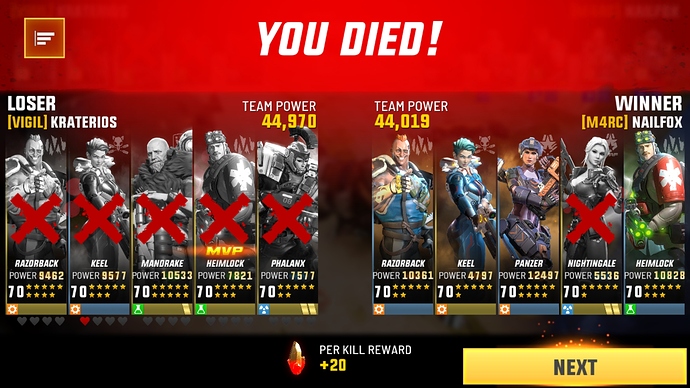 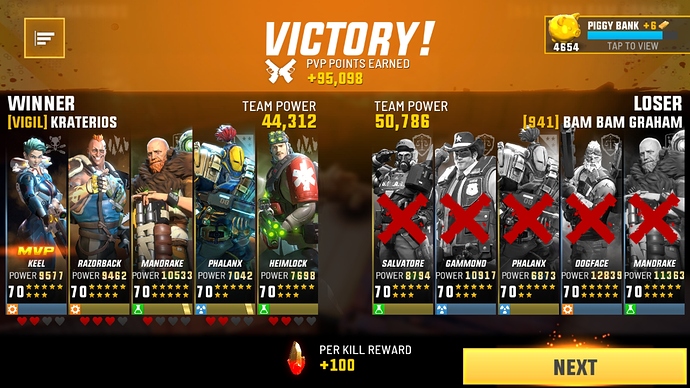 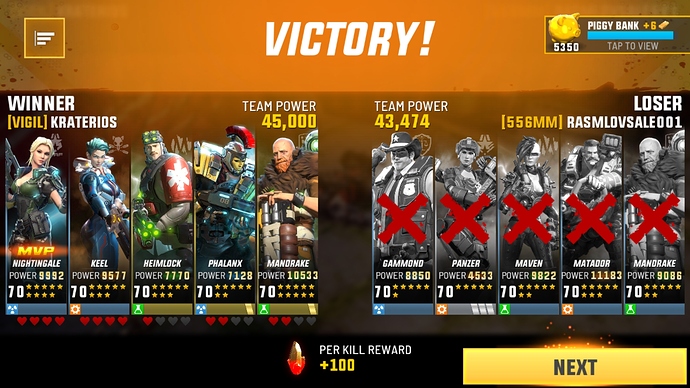 @Kraterios You killed the last life I had on Night, gg

Lmao! You don’t understand the importance of DPS(Damage Per Second). Critical Damage, Stun or advantage of chem vs Mech… Other factors ur attacking the same hero he/she is running around the screen to make you waste time and energy missing the target. Duck behind cover switching to another hero and stunning that hero so you can then kill the enemy. Another factor that catches players all the time is line of sight. If your hiding in a corner and can’t fire across the screen the hero changes position and in that time one hero stuns you other silences you and you lose the match…

Other strategies are two healers. Shield personal and tanks… Best option is Mandrake invisible another hero and fire under a cloak…

@Xgames I have a 9* plat odachi, I understand dps.

@Xgames Well LMAO to you too. As if DPS Critical Damage Stun and etc makes any difference when your entire team gets decimated by the level 70 character in 5-10 seconds. Are you not understanding my point here. If the other team has a level 70 character with underdeveloped skills IT SHOULD NOT BE EQUAL to a level 43 character with leveled up skills. What use are the skills if she dies in 3 seconds. The PVP formula needs reworking.

Is this the first time you woke up to the idea the top players go around bottom feeding…J0ck3r??

Kraterios I seen what you were pointing out… but that’s more of the usual with this game. There are a set number of teams in PVP that are balanced. Its all in the luck of who your playing… When I start getting in the rank of 2,000 and above I get overpowered by veterans with better teams… 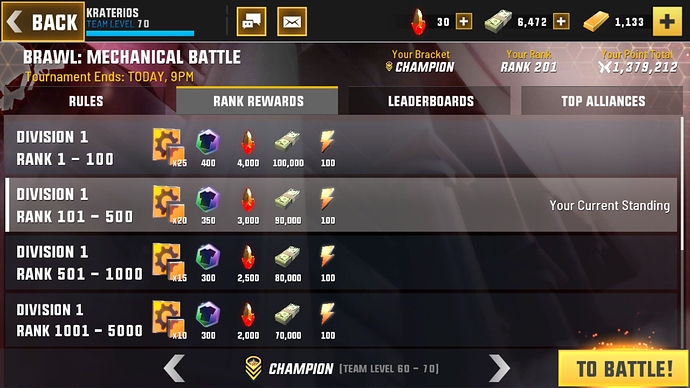 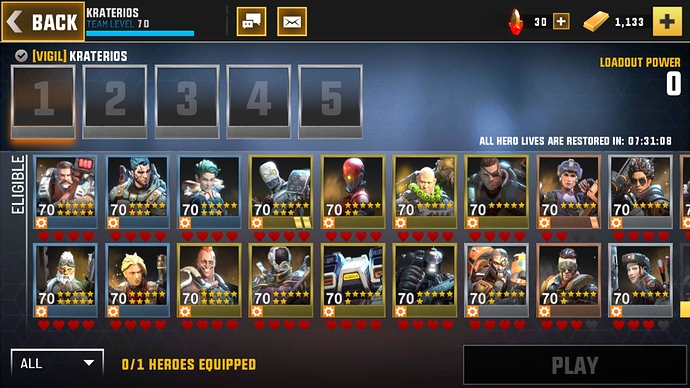