I am constantly screwed over when playing PvP and I gotta tell you, this is really killing my enthusiasm for this game. I’m put up against teams that have a much higher level than I do as you can see in the screenshots below. That’s just a small taste of the screenshots I’ve taken.

I’m getting creamed out there, especially with this new Alliance PvP KLG blitz. Please consider my request. I’m no freeloader – I’ve spent a lot of money on the game to level up but it’s obviously not helping. 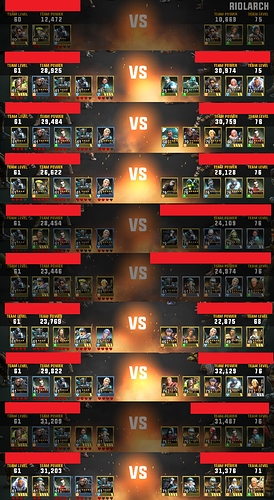 It mayched on team power and you are bringing a mix of heroes, basically min maxing

PvP matchmaking is based on overall power of your 5 man team, not team level. I would suggest putting together a team where your highest power hero is your main dps and the hero you control (most of the time). Then add healers and other support that are LESS power than your main hero. Make sure your highest powered hero isn’t more than 3-4k higher though or else you’ll get penalized for a mismatched team. Hopefully this helps you. And FYI…I wouldn’t put together a team of all or most bonus faction heroes, they’re rarely good enough together as a team. I tend to choose the bonus hero that’s worth the most points (anvil now) and build my team around them.

Edit: I used 3-4K as a power difference based on where I play (45-55k power) so at lower power, you would reduce that difference the lower you go.

In all of your match-ups, there was a difference of less than 3k power. As far as I see it, matchmaking is doing its job properly, finding you a fair match.

As for level, it is one of the things factored in power. You don’t just look at pure levels are go “This one is better than the other”. Skill points, rank, stars, all contribute to power. Would it be fair if you had a level 60 plat, but the other guy had a level green. Would that be a fair fight, even with the power match-up 10,000 to 4,000?

I would actually argue that matchmaking has been merciful on you. You min/max, you sandbag, yet you get such a small difference. Count your blessing, cause matchmaking may just take them away one day.

“Oof censoring”? What’s that supposed to mean Yosai? You have a problem with me covering the names?

Thank you ShortyDA. That’s very helpful and I appreciate the advice. I’ll give that a try.

In my opinion, these are fair matches. 1-4K difference is winnable. What I declare as unfair would be 5-10k difference. It’s all a matter of decided who to attack first…

I agree with you. Your one of the “lucky ones”. There are people that have a power level different of more than 10k.

Thanks for all of the input.