Hey guys, thought I’d create a thread where everybody could share screenshots of their 10x hero crate openings, whether they’re awesome pulls or absolutely horrible.

I’ll start off by sharing my most recent, and by far my best pull, ever. Seven 5-stars, four of which were Heimlocks! LOL, I was shocked… 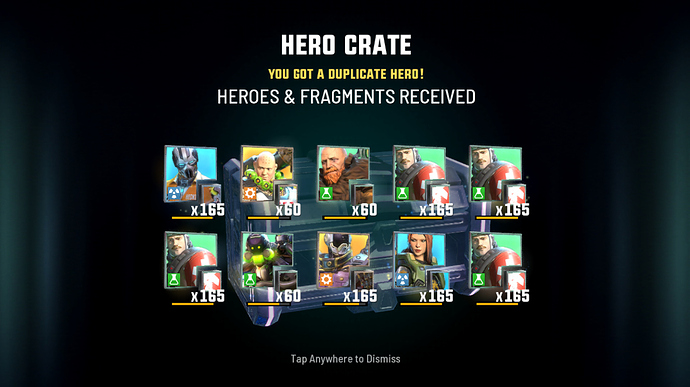 How’s your guy’s luck been lately?

Haven’t opened a 10x crate or Hero Crate since my day 1 in the game!

Trying to save my gold for new character crates. But seeing this makes me wanna.

That’s Insane! Currently that would be my dream crate. I’m only missing 5 heroes: Heim, Oracle, Heckler, Scum, and Artemis. You literally got 4/5 of them in one pull hahaha. Gratz 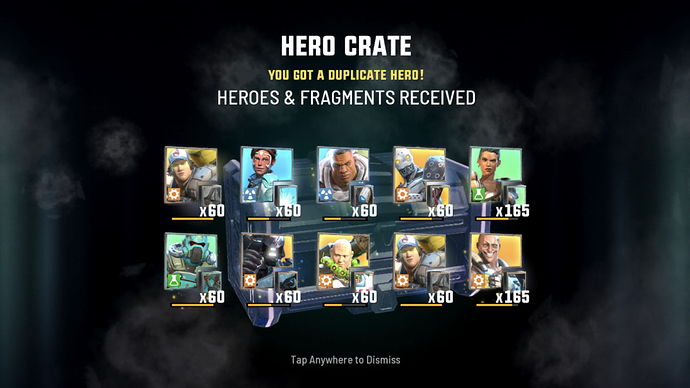 Blech… horrible pull. Razorback redeemed it a bit at the end and 60 flatline frags isn’t terrible, but nothing else useful at all.

They should remove the requirement of VIP level 1 to open 10x crate
I have enough gold to open them but stuck because of the recommendations.

Well shit. I’m sure you have seen my post of 11 crates opened and zero new heroes. The only thing that was worth it was Oracle fragments. My luck is bad. So many heroes I’ve wanted since day one and they don’t drop for me

Also, sorry about your pull 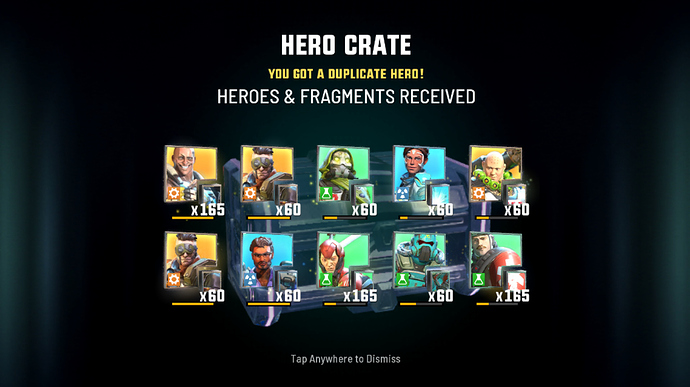 I dont have a scene shot to post but my last few crates have been terrible. I get duplicates and it’s always 10 to 30 frags and it’s pretty crappy spending money to feel ripped off.

I got 60 for moss just a little while ago. Yesterday it was nightengale that it gave me 10. And before that I got like 30 for another. Just thought it was a glitch that day. I dont know. May I’m mistaken for another crate.

Or did you open PvP or bounty crates? 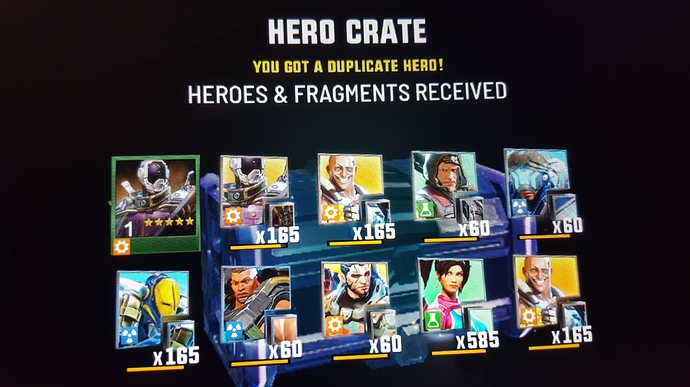 I opened this awhile back. There are more frags here

but those heimlock frags you have are pretty dope though

Nice pull! I have yet to ever pull a 7*, still waiting on that day…!

FRICK. I got all dupes on my 10x crate opening. I hate getting dupes! I got two five star dupes! I really want heckler or heimlock, but I’m not entirely sure ill get them…

I don’t understand why other people get prophet or artemis and only spent half as much money as I did! I’m vip level 11, so that means I spent an average of $300. And I never got prophet or artemis, not even a new hero! It seems like HH hates me… I feel like I’ll never get a new hero. Every time I open up hero crates, I brace myself for the wave of fragments. I never expect any new heroes. I opened 60+ hero crates and still haven’t gotten anybody new. It’s upsetting. I’m tired of getting duplicates. No matter how much money I spend, it seems like I’ll never get the heroes that I want. It’s unfair. I love this game and the community, but I cannot put up with getting duplicates. Something has to change.

What the? Are you seriously complaining about your luck?!?

it has nothing to do with HH man! You’re just as unlucky as me, and I’m not complaining.
And with so many duplicates you can easily
10s heroes, get heronium and buy the ones you don’t have.

I take it more seriously than others. Sorry…

Also, I’m still level 68 and I haven’t maxed out a hero’s stars yet. What will that take? EVEN MORE DUPES. I’m fine with duplicates it means that I get a hero to 10 stars, but I don’t know when that will happen.