Anyone have any good team combos that work with them? It feels like they solve each other’s weaknesses (Shivs plat triples Shanks damage, making him actually okayish as a DPSer, Shanks plat heals Shivs, which is real helpful), but using them both on the frontline really constrains my ability to build support into the team. I’m currently running them with Ronin, Night and Moss, which is good but not great…by the time I hit threaten with Shanks the match is usually half over.

No, I prefer that Shiv is better off alone, I never even used Shank after the pg month was over, but now sadly, I have to wipe the dust off him.

I think I prefer Shivs alone to using them both as a combo. I’ve got about 40 heroes at plat, all at about the same star level, so I feel like I should be able to come up with some good combos that include Shank and Shivs together, but it’s surprisingly hard.

Also, there’s basically no point to leveling up most of Shank’s skills. His bronze and silver scale absurdly poorly and there’s not much point to leveling them up, his gold scales better but I don’t believe in leveling up a skill that only works when my allies die (because when that happens I’m probably losing the match), and his plat is the only skill worth leveling. Beyond that, his damage boost from Shivs basically makes it so 3/4 of his damage is mech damage, so he’s only useful against energy and mech guys (and just bounces off bio). I don’t quite get what’s going on with this guy.

Grasher, have you ever tried putting a team together of mostly front-line tanks with them and having Shivs and Shank as last two so that they are forced up to mid or rearline? That may work. I.e. Drake and other front-line heroes?

Cuz front line can ever have two heroes…I’m going to try this myself.

No, but I think it’s one of the better approaches to a Shivs and Shank pairing. Most of the best supports are frontliners, so it’s really hard to use both Shivs and Shank and have a balanced team where everyone fights from their natural positions.

Yea, I don’t see anyone running them together. Funny how they were made for each other, and yet, they don’t really work great together; but I think it’s good that it’s also clunky together otherwise it might have been OP. I do use Shank in a team with Kun, Odachi, Bucket, and Flatline. Although Shank’s DPS is awful, he is good at stunning.

Yeah, threaten’s stun length is just absurd. His sucker punch isn’t bad either. There’s a ton of randomness involved in using him, though, since threaten is so powerful but so inconsistent.

It’s nice cuz once odachi or flatline or bucket dies, threaten procs, and Kunoichi will kill like 2-3 enemies.
And just having Flatline takes the heat off of Kuno too.

That’s definitely a pretty viable strat. I get worried about strats that actively involve my characters dying though, because it really hurts your odds of heart preservation. Probably not as big of an issue if you have a bunch of teams you run, though.

Well, they don’t have to die for threaten to proc, it’s just a safety net.

Touche. I should probably build in some safety nets on my teams, but I like the feeling of living dangerously.

Hey grasher, check it out… 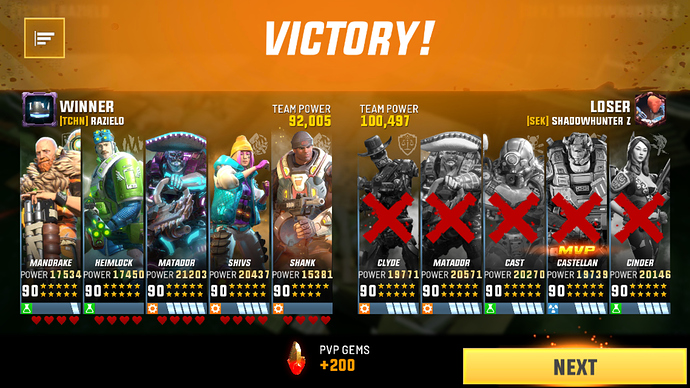 Lol, very nice! Did you find that Shank helped a lot (by doing good damage due to Shivs’ plat or by healing Shivs)?

Absolutely, especially due to the fact that they were able to stay up longer. Check it out: 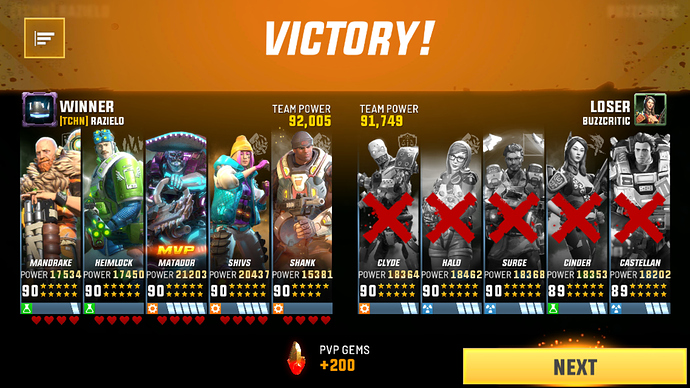 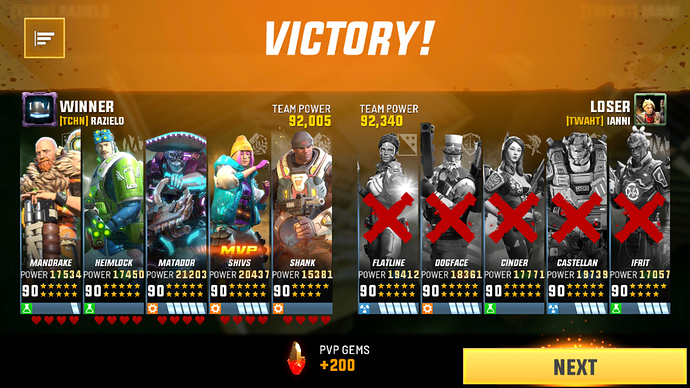 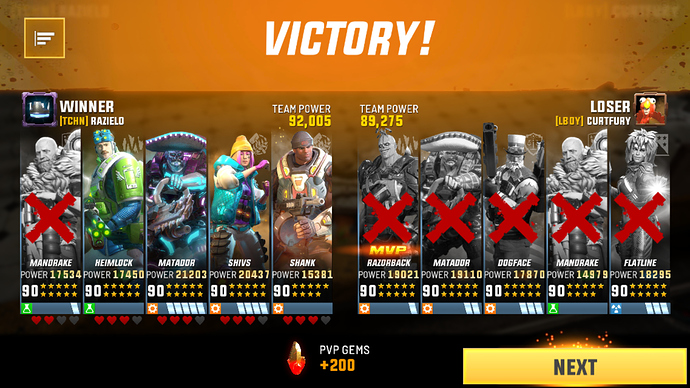 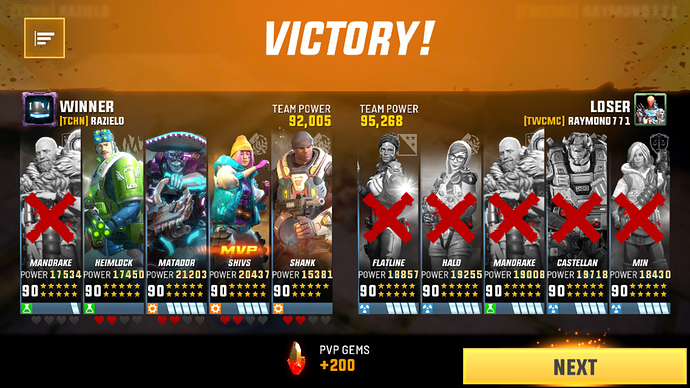 Sick. How do they get arrayed, 2 frontline, 3 mid? And do you force Shank and Shivs into the midline by putting them last?

whenever you want a hero to be displaced from their natural position you simply fill that natural position with more heroes than that position can handle. I’m not sure if the tiers go 2,2,2 or 2,3,2 or 2,3,3, but generally if you put more than 2 tanks in your team, the third one gets pushed to the mid line. That same concept applies to the mid line and rear line in similar fashion.

Yeah, Shivs and Shank get forced to mid.