So… yeah, another complain thread that i try to keep civil… even though it’s frustratingly hard… As the topic says, ruby skill completely ruins PvP in my opinion… it’s ridiculous to get nuked within just 2 seconds after the match starts… either by a serial or ESPECIALLY by Sapphyre… the damage output of these heros is just completely off the board and both are justified for a nerf… The same crap happend to 4cep when he came out, he was OP and broken with his fire rate. But these two… they make 4cep look like Ghandi…

Allow me to introduce to you… shivs…

On this point my friend I must disagree with you. At the “Ruby Line”, as I like to call it (level 95), there is going to be a mix of ruby and platinum heroes that can be of similar power. I agree, Doing Damage vastly changes a DPS hero’s output, even on the lower power heroes that when they are at Ruby they have similar power to other higher power heroes that are still platinum. But, as levels increase and Ruby heroes become more prevalent, and include more tanks and supports, and we play at that level more…it will become normal to deal with this kind of massive damage. Right now there is a kind of awkward growth period going on, eventually the baby giraffe will get it’s legs. 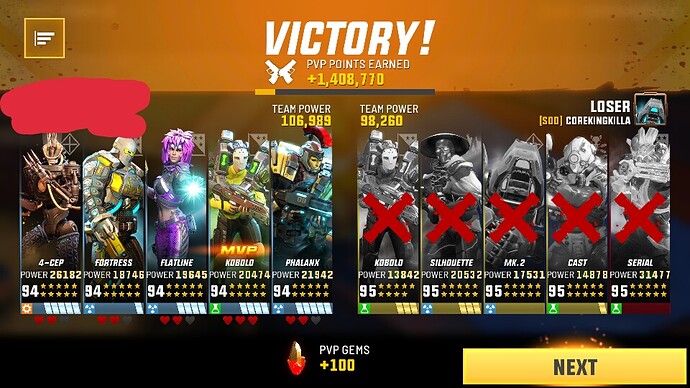 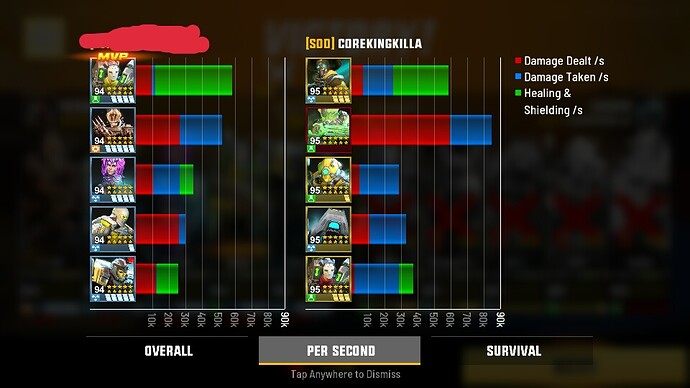 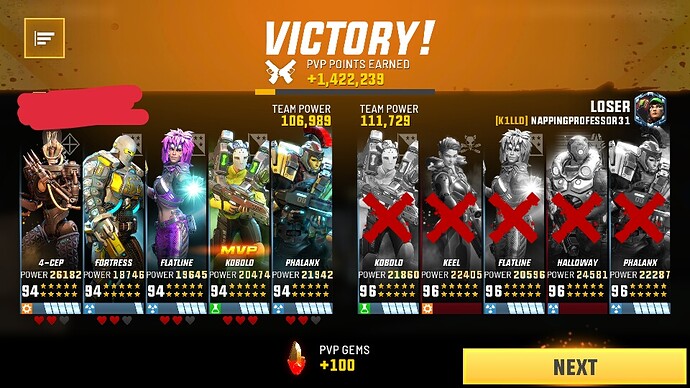 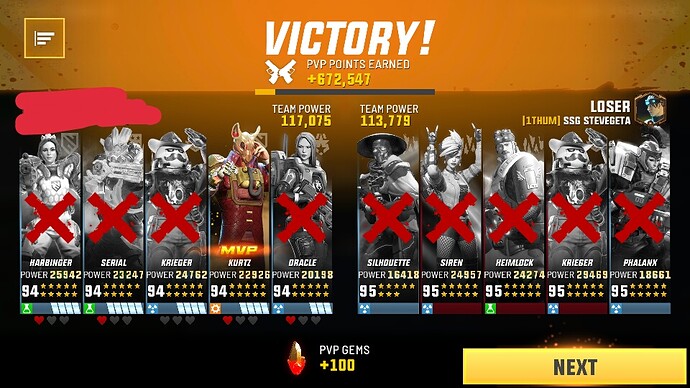 And there are many more where plat 5 ryker & 4cep,shivs,maven defeated ruby lancer, sappy & serial…
What I wanna say is… Don’t say nerf rubies… Say nerf those players who know how to use rubies…

& say gg to those who ruin rubies & ronin

Rubies is needed for extreme mission…
And it can help for bounty also.

One of the ruby’s skill is doing damage, that what high DPS heroes for…

I think, nerfing down any heroes will make other part of the game more difficult…

But imo, for PvP (and AW also), what we need is more balance brackets…
So brackets are not determined by your total power only, but also from the heroes’ level you own…
Example : if an account have more than 5 rubies, eventough its total power is (let say) just 750k, put that account on higher PvP bracket to compete…

Those r my friends’ combos they sent me i posted here… You know, u still don’t know… ●_●

Serial’s bronze skill needs a nerf. It recharges way to quickly. Once the skill is up then it is an automatic defeat. It even destroys energy heroes.

If you know serial has shield up you should focus on someone else untill shield goes down. And talking about recharge time it’s perfect. If it’s altered extreme missions will be difficult to complete.

The problem isn’t Ruby. Ruby skills are needed in extreme. If you nerf any ruby skills, good luck getting pass any extreme levels in the future. The problem you’re describing is pvp match making.

I have rubies and some games I still lose so I figure out what team to use to beat the team beating me. Just because you have rubies doesn’t mean you will win every game.

Serial’s bronze skill needs a nerf. It recharges way to quickly. Once the skill is up then it is an automatic defeat. It even destroys energy heroes.

categorically not true. I’ve beaten many Serials after they’ve put up their shield. Yes, you have to be quick about it and kill him when his shield is not up, which means you aren’t going to get him with Castellan (Nor should you be able to), but it’s more than doable.

IF there was anything about Serial that is lame, it’s his “your coming with me” skill. That’s a whole lotta damage for a skill that requires you to do nothing except die. It just makes him seem like a poor loser.

I’ll edit this despite being called out, fair enough forums rules yadda yadda. But relating to the above post, people love to complain so I will educate y’all who don’t know why you’re facing teams like the ones below. When I use 3 man teams like this, I more often than no face minmaxing teams also, the above post was using a near 8k difference between his strongest and weakest hero (and a dead meta), the below image it is clear why I was matched with them. 90% of the time the matchmaking is working as intended but people fail to realise they are the one at fault.

In addition, regardless of how angry and mad you are try to refrain from messaging them calling them a “disgusting piece of ■■■■” 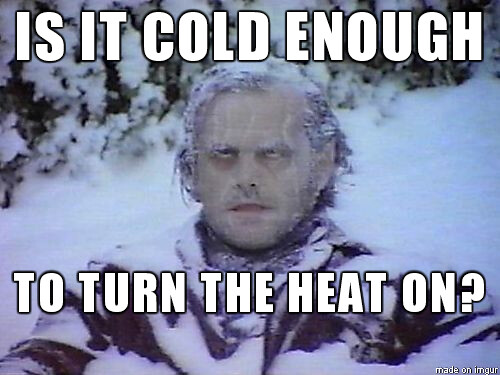 I don’t see “yadda yadda” in the forum rules, but I DO see that if you see something that goes against the rules, you flag it. It doesn’t matter if you’re called out. That doesn’t give you carte blanche to break the forum rules.

This has been discussed many times before.

Yea these teams beat me a few times back in the day then I leveled up some three man teams and now I use them or beat them. People only complain because they are too lazy to figure out how to beat it or to join haha