I’ve cheated on death before.
Danger is not my middle name, but I’m very close to it…
Bounty Hunter - DPS - Master Gunsmith
a droid with human recollections.
The memories of past life have turned this robot into a perfect headhunter.

Bronze: Dead-eye - marks the heads of 6 enemies in the field and then shoot in rapid succession with 50% to miss the target

Silver: Fire Rain - increases the rate of fire and the speed of reload of the weapon for 6 seconds.

Platinum: Don’t Even Try - when the enemy marked with Bounty uses a skill, the hero counterattacks immediately by firing a blinding bullet cancelling its activation, plus the blinding bullet causes stunning for 1 second, disorientation and silence for 3 seconds.

Appearance: is a drone that simulates a man’s appearance.
He wears a long brown jacket, brown pants and cowboy boots. 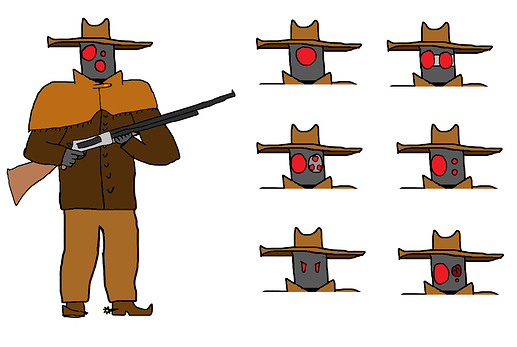 Weapon: "Bonnie" is a Long-Barreled Revolver rifle with six bullets.

Imo there is no need for the “if the enemy suffered from bounty” in plat skill since "bounty is triggered by targeting an enemy, and he can’t kill an enemies without targeting them.

Oops i almost forgot he’s an Erron Black like.