I was unable to get panzer when she was launched. Till last week, she was not available anywhere. However, last week I saw she was available in hero chest. I tried th get her but with no luck. I request you to kindly provide her in tired crates like that of iifrit. Thank you

no one can do anything in it

I think he meant that he wants a PvP crate featuring panzer, which is not a weird request

And it’s something they’ve done with all these exclusive events. Yanlong’s brawl had a Yanlong crate, and so did Callidus’. Don’t remember the others, but it’s quite likely they also had a crate

what do you mean by this?

It’s an current PvP event, so it’s ok in my opinion to add it as a crate for this tournament, I won’t buy it because my panzer is ok for what I use her, but I understand newer players they want her, especially for tournaments like this

As I’ve already said, they’ve done this for previous events. Not sure why you don’t want him to get panzer

I also dont have but i didnt asked to add

The crate is out btw

Which crate are you talking about

The crate is out btw

No Panzer crate for me.

Hero crate about what the creator of topic said

I had already said that “I TRIED TO OBTAIN HER FROM HERO CRATE BUT COULDN’T GET HER”. Therefore I requested for separate pvp crate so as to participate. PLEASE READ AND THEN COMMENT.

It’s a Wesson pvp crate, not a panzet

I remember that there was a panzzer box almost in the middle of the ifrit update since there is always a box of heroes of the month at the beginning in the middle of the following month and, frankly, I assumed that everyone would buy the panzzer, but I see that many they complain that they do not have panzzer and now they ask for a special box, it does not make much sense to ask now only for this panzzer event … 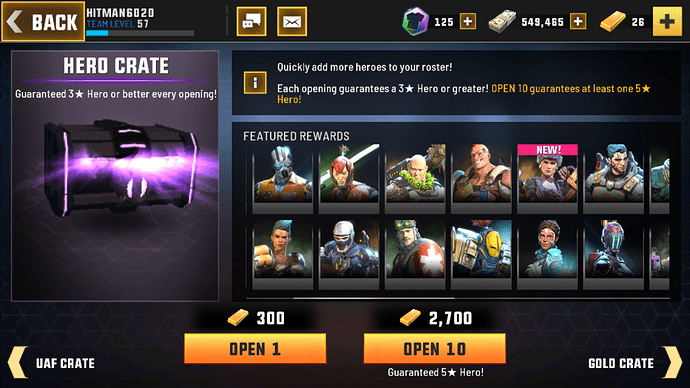