Over the past couple weeks, I have seen numerous players mention the repetitiveness of this game, and how it has become very boring rand tiresome redoing the same tasks day after day. This made me look at the simple quests we are given daily, and took some time to think about how quickly I was able to complete them all. Then I looked at what these quests were having us do. Essentially, they are having us play a little of each game-mode.

I then began to look at other games, and saw how they chose to hand out quests, tasks, and challenges. I then began thinking about how these different examples could be used in Hero Hunters, and decided to create some concept art for what it could look like. 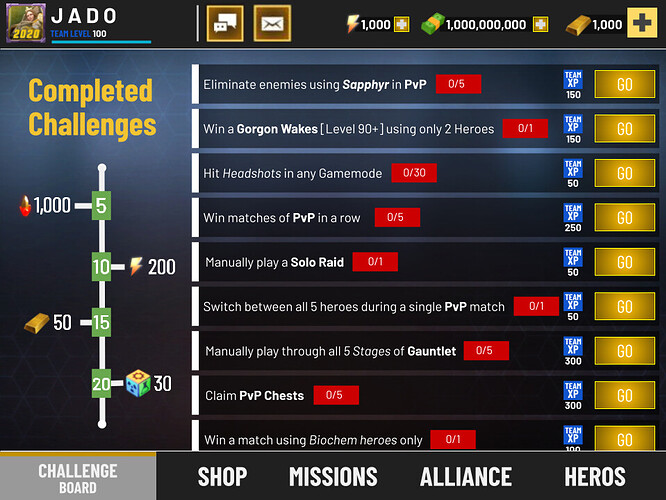 It’s a lot to look at, I know. Let me break it down for you.

First and foremost, I wanted to change up the simple and run down quests we have had since the dawn of the game.

Players would 20 challenges, that reset daily just like the Quests we have today. Each challenge is completely unique from the others, giving each day a fresh new goal to be met.

With there being a larger variety of challenges to be completed, that also means that certain quests will be worth a lot more than others. The easiest challenges would give 50xp, while the hardest would give 300xp. There would still be challenges to earn Mavin/Surge/Matador/Cinder fragments, but they may not be the same as they once were. More quests, more xp, more of a challenge, what’s not to love?

From winning Coop Raid with only 2 heroes, to playing a Solo Raid manually, the goal for the Challenge Board is to help give players a challenge, while also giving them something new, that should take them some time to complete daily.

On top of all this goodness, there would be Milestone Rewards. There are four milestones, being 5 challenges completed, 10 completed, 15 completed, and 20 completed. Each milestone gives a decent reward for the players efforts completing there challenges for the day. The first milestone, being 1,000 Gems, would alternate daily between PvP, Gauntlet, and Alliance Gems. The final milestone would change between various rewards, such as Bucks, Crate Tokens, Completed Plat/Ruby Cores, Skin Crate Tokens, and of course Elemental Fragments. The rewards can be a variety of things, but it is intended for them to be items that are most wanted by the players.

Just like Quests are now, the Challenge Board would rest daily, giving the player a fresh slate, allowing them to complete 20 new different challenges.

I think something similar to this could help the game’s overall look towards quests change. It could even help bring back some players who were just looking for something different to do. This game can be repetitive at times, so maybe something new and refreshing like this could help. I’d love to hear you’re opinions on this.

Jado’s opinions are cool as always

Looks good, I completely agree the quests need a rework, however the rewards you have suggested should be more tame for daily, perhaps weekly or monthly goals or challenges could also be implemented for larger rewards. Events that run more than once a month for example, get x reward for doing y amount of damage in bounty per month? For attacking x amount of sectors or repelling attacks per week? Lots of potential for more challenges and fun tasks rather than the basic ones that everyone completes in 5 minutes. I often want to play but get bored of the same things, with challenges it could be more fun, especially if it promotes unconventional play like using a hero nobody uses to win pvp games or even something stupid that can be rewarded like running your cash to 0

Also another suggestion. A refresh on challenges. Say something is out of reach. 1 or 2 daily refreshes

As the game is getting more and more unpopular due to the repetitive content providing month after month. This can be a boon for the game

Alliances will be given levels according to the missions the members pass and contribute to alliance points . The levels can be from 1-10. Now for the missions will depend on alliance power. Higher the power, tougher the mission , better are the rewards. So what’s next !
The missions that each player contribute , they will get alliance gems or bucks or any rewards once hitting the milestone . Now for low players who find heroes upgrading a struggle, frags donation system can be introduced.

In this system , for each 1*/2*/3* hero , one can get only 10 frags each day . For 4* hero 8 stars can be taken , for 5* heroes 5 frags will be taken and for 7* heroes 3 frags will be taken. Now for doners it can be a choice whether to convert the frags of their 10* hero to heroniums or save for donation . The donation stats will be shown in alliance tab along with contributions in milestone achievement. Higher the level of alliance goes, one can donate and reciever more frags depending on level of alliance

This is not all , alliance levelling system will also help in WAR like as alliance level goes up , players will get 10% bonus buff for attacking and defense as power of heroes will be increased by 10%.

I think this can be a very good way to bring old players back and the losing popularity of game can be brought back .

Lemme know what you guys think .

See the issue with donation and sharing systems like this and 100% what makes them undoable is people who have alts and multiple accounts. I have an alliance of ruby alts doing it the long way and we dominate everyone we face, if I could use the features you have posted here then I would have an alliance of level 100 alts who can share things between them and be even more overpowered. This is the entire reason why there is no gifting or sharing in the game currently, I do like the idea of more alliance based missions and game modes however, blitz is kind just like throwing money into points by doing what you do every day or spending fragments.

There is already pvp scores for alliances, no reason why rewards cannot be linked with those imo

Like the idea.
Many games have weekly and monthly tasks other than daily as well, harder to do but better the reward.

Jado …how did you get inside my box?

I’m not quite sure what you mean.

my laptop jado how did you get in there lol

I think is also time to create a lvl 95 on co op raids and solo raids.
And have more simulators and scavengers hunts

I’m still a bit confused. Did you have an idea similar to this?

Just read this thread, I’m all for a quest overhaul. It would drastically switch up the usual gameplay, and encourage player creativity with their team comps.

I do believe having unusual quests which force the player to improvise is a good way to shake things up. Naturally, the wide range of player levels makes it hard to implement hero/level-specific quests, but the fundamental idea I am a fan of.