Hello there i would like to do a reference to the unfair pvp system. I play on 5v5 and i find opponent’s with 2 champions 30 or even higher lvls, they are unkillable so i loose. In my opinion that is not fair the developers should do something about it

Can you share some screenshots of the matchups you faced ? Also screenshots of your teams in PVP , so that the community members can better guide you on how to avoid unbalanced matchups.

Nothing you can do about it except have a balanced team and good comp., and people usually make topics about the pvp system, it’s not the first time the devs heard people complain about pvp 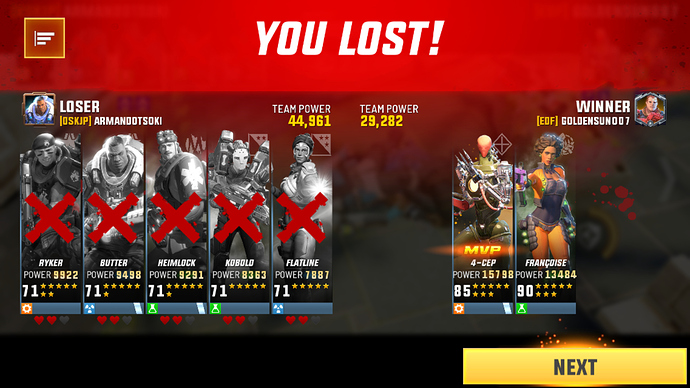 How would you improve that? Feel free to leave your improved, QA-tested code in a reply.

Some events like brawl have a minimum team level of 3, would it be possible to make the minimum team amount to 5 in normal tournaments?

Lots of things are possible. I guarantee that Faction Brawl events would cause a lot of complaints if you only had 3 Heroes in that faction, or 4, and couldn’t play. Or us being “money grubbers” by making you pay for revives to get an even team of 5.

Other Brawls might be possible, but not my call. Will pass the feedback along.

I can’t remember the last time there was a single faction featured so I am not entirely sure where that instance would occur, but for some factions it is more viable than others agreed. In tournaments where you have access to all 85+ heroes, minimum of 5 shouldn’t result in a backlash problem however

You mean, a Draft? Not every player has access to all 85+ Heroes. Sometimes, decisions are made for the good of the WHOLE COMMUNITY, not just the endgame 0.5%.

Basically the system tries to match you with an “even” team, then if it doesn’t find a suitable match the perimeters are broadened until you either match with another player, or get placed against a bot. At least that is my understanding of it.

The devs do this to try and keep the time to find an opponent down. It sucks facing a team that is obviously much more powerful, or min/maxing and barely getting punished while you are running a perfectly balanced team, but it happens to everyone. I’ve seen people running 10* 5 plat bars with 5* gold heroes and they still will have higher team power than mine which is all within 1-3 bars of each other and 1*

Guys the solution is simple in a 5v5 tournament or free match you have to be obligated to play with 5 heroes same goes for 3v3 . Just lock the limit don’t allow the players use less heroes than the free PvP or event says.

I have a slight problem with opponents… I think

It’s that kobold and matador that did that for you

When you are a low power and your heroes are mostly dead but you only have 2 or 3 heroes and you wanna try and use them hopefully you get a win and get few pvp gems. Or points when is the event. And if you are a vip0 you can’t revive to make a 5 hero team. On top of that depending how your heroes have died and you have 4 heroes with full lives and you can’t use them because the game only let you use a team with 5. But you are a vip0 and no revives available for you. Can be unfair on those players too. Basically depends which way you see it. But on events 3 Heroes and free play is Free play. Try and learn new teams and how they work with each other. So you be good on events. If you wanna grind.