Pvp rewards just reverted back to after update rewards

Pvp rewards were changed and changed back again. My rewards are only showing mandrake again not caine after it was “fixed” 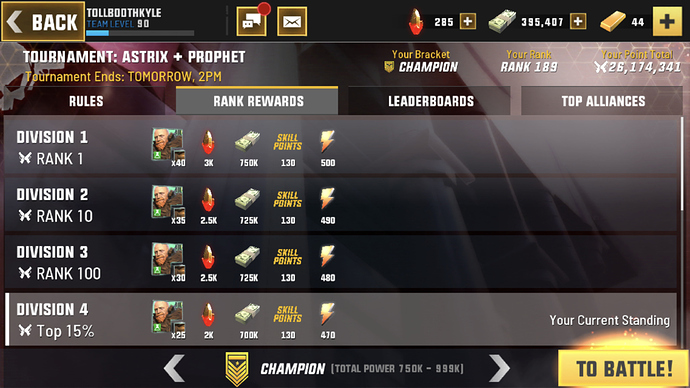 Yup, same here. Hopefully it was a bug and not intentional.

I could be wrong, but I don’t think it was stated anywhere that the rewards were going to be reverted back to what they were. Only that they would be raised a little.

This is only a theory, but my guess based on the past couple updates, is that they are reducing rewards to sell those doubler things. This was just the first time people really spoke up about it.

Things are never going back to what they were and most likely will continue to trim the rewards where they can. Buy those doublers!

Division 4 was what my screenshot was after update and then they “fixed” and division 4 had 75 drake and 75 caine. Now it reverted back to the screenshot

It would seem the bug has reappeared where the rewards are only showing the lowest bracket again, I suspect this will be fixed before te tournement ends or compensation will be provided

But do tests before updates, instead of afterwards? :ghignante:

I like that that i have to put in alot of time and effort to get 61mill points in champion bracket to get 30 mandrake frags and the other usel3ss rewards but in the mystic bracket you only need 500k to get top100 rewards if there only 50 people in the bracket why does it exist ?

Hi, i will suspect ignorance here as not everyone knows how apps are developed but the changes made in the recent update were not just made, they were coded and made weeks/months ago and such bugs can reappear. I assure you extensive testing is done to minimise these issues

Are you working for HH now? How do you know so much details? Or are you just trying to be positive to become mod or something?

Hi, I talk alot with the developers and have experience in the field of app developement. I am not trying to be a mod on the forums just keeping people informed about things they may not know.

I’m not worried. From past experience, HH has always compensated in situations where a mistake was made.

Thanks for the reports everyone. We’ll investigate from here.