Put these players in their own lobby or something

How is this even acceptable. 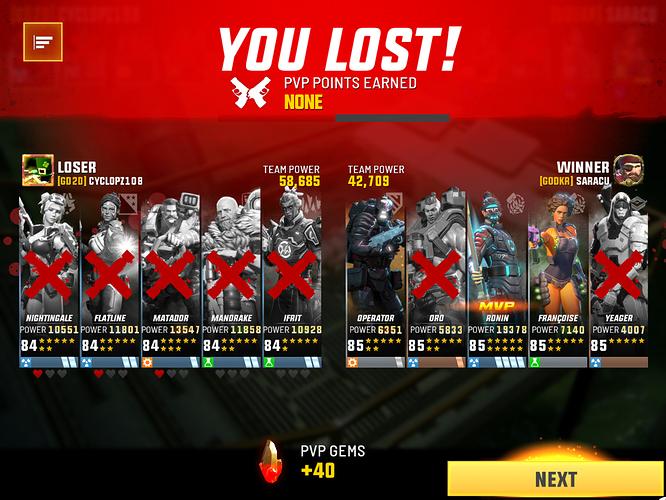 Still, even without much of a DPS (Mandrake does a good amount of damage) that really wasn’t much of a penalty. To stop this type a sandbagging maybe they should match the top hero’s power level instead of the team as a whole. Really make people think about the teams they’re putting together.

that really wasn’t much of a penalty.

37% power advantage isn’t much of a penalty…? The issue here is 100% team comp, like @BlueHunnits9 said. A Ronin sandbag team this poorly made isn’t really that hard. With that kind of matchmaking advantage, you can pretty quickly kill off the low-level stuff, thereby destroying Ronin’s DPS.

Of course, when you bring zero capacity to deal damage, every fight’s going to be a struggle.

Regardless of team composition, as you take the time to kill the weaklings, Ronin would have taken everyone in your team down with less than three hits each. This is a real issue and yes the penalty isn’t severe enough to prevent it from happening as they can still easily win. Thanks for sharing this lame sandbagger.

ronin is the most broken character yet. Instead of 200% damage reflected it should be 150% or something like that