I UNDERSTANDED BECK’S SKILL DAMAGE AMOUNT DAMAGES. NOW THE REDUCTION OF THE VALUE OF STRENGTH IS QUESTIONABLE !! WERE THERE ANY BUGS? 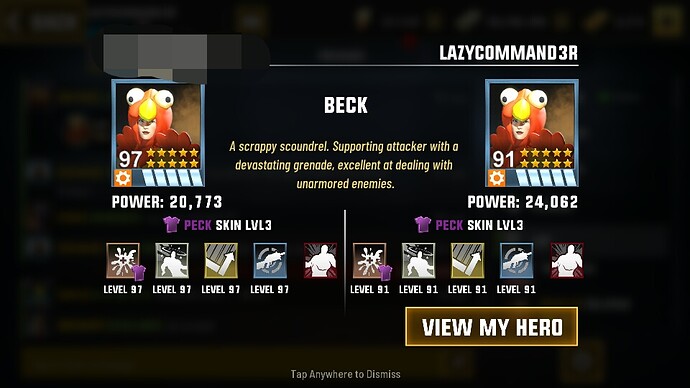 IMG_20210224_080601960×540 121 KB
I don’t know how but, my beck suddenly became very powerful i’ll recommend you all to work on her as she is cheap source of heronium & very good power for wars yes she is not good in pvps but, it’s ok… There are many heroes who help us a lot in war & patrol… It’s great that beck isn’t good by her performance in battlefield it means we’ve to face less difficulties in campaign missions if she is our enemy… There’s various good reason why many players have her maxed or ruby as she does very high damage with her ruby boost & i repeat very high power.
So, my suggestion is… Max your beck:)
J_A_D_O February 24, 2021, 3:24am #5

The screenshot above shows that your looking at a player who has already updated there game. Once (you may have already) you update your game as well, the power and damage from your Beck will decrease as well.

To say Beck was nerfed would be an understatement. She’s been put in a tryptophan coma. She wasn’t a top DPS hero and wasn’t abused in pvp. She was high powered which made her great for war teams. Clipping her a bit, ok whatever, but to drop her almost 6k in power? That’s just ridiculous and really screws a lot of peoples top war team. It seems like a total knee jerk reaction but to what? There aren’t a bunch of topics on Beck being over powered and a cry for her to be toned down. I just used her in game and she’s a cream puff now that does next to no damage. She is basically just another in a long line useless heroes now. R.I.P turkey Beck…

A hero’s power is a reflection of its stats. Hence why you see power above the stats screen directly. Lowering any variables in there would result in lower power.

what kind of data or stat behind contribute to such a significant nerf?! Or unfortunately it is simply the result of her surviving / recovering from the COVID-19?