Heroes’ power calculation system has to be reworked, it’s ruining a big part of this game: pvp.
The actual system gives way too much weight to skill points. A hero with 30-50 skill points less than a same one, but with all skills maxed out, will have 200-400 less power. But will have same hp, attack rating, armour, etc
And this is a shame.
This means that the first hero team (plus other 4 heroes using the same principle) will face teams with 1000-2000 power weaker teams than another team with the same lineup. The first team will be advantaged. He’s EXPLOITING the power calculation system.

You have basically a bunch of people involved in designing, testing, scripting, etc skills wasting their time (and your money) because players won’t use them just to have an advantage in pvp.

PLUS, Half of the skills are pretty useless in pvp (and sometimes in pve too) and people are not tempted to raise or use them. Like granades or generally all those skills with slow animation or activation time.

And the actual pvp system doesn’t help too. People (except whales and top players) are not tempted to build the strongest team with best synergies. They aim to build the best team with the LOWEST power possible. Using 1-2 strong heroes (dps or mandrake) and a bunch of useless fodder. This is a poor way to manage a pvp system.

I bet this is not what you wanted when you designed the pvp system.

Rework power calculation system. Give more weight to stars, hp, armor, attack, etc, rather than skills level.
Rework pvp sysstem: less matches but with a higher quality. It’s boring doing 100-200 matches to get to the top. Better have 5-10 matches maximum per day, but with higher reward. Do you prefer eat an average pizza (or whatever you like most) 5 times per day (in 10 days you will hate pizza) or have it once per week but with top quality ingredients?

I’d go even further, that the pvp system is broken because it values ALL gold skills as the same percentage of rating increase…in other words gammond’s gold ablity (which is absolutely useless) is worth the same as Mandrakes gold ability which practically game breaking.

Becasue of this…I have a 6*gammond silver 3 on purpose and some other heros whos gold ablities are simply not worth it, and only force me to play harder opponents.

A mandrake can run… 5* gold 4 promotions…with

Clyde can do the same thing… 1 point, 1 point, and 55 points (in gold skill) and completely demolish players… the system plays counter to what you want… punishing players who are trying to play it the right way.

Right now pvp is lacking in the skill/tactical/fair/team composition/fun departments because of people abusing power.

It is far more effective to match one or two high-power hero/s with fodder than it is to actually figure out an effective composition. The only time you lose this way is if you match up with somebody doing the same, but with a counter hero. Easily gets you 60+ wins with no revives.

Pvp has a heap of potential, but it seems the chances of me being matched fairly is slim right now.

Also, what’s up with getting matched against teams 4k+ power higher after the patch? Seems… wrong.

Unfortunately the difference is likely much higher than that…

The heroes that need the fewest skill points to be good in pvp, also happen to be the most common ones you will see. Coincidence? Nope… This is inherently why pvp is messed up right now.

IF you combine a team of heroes, each one having one or even two of their abilities minimized. You gain a 2000-5000 pwr advantage over the other team.

SOLUTION: have power calculations ASSUME that all skills are maxed, this will not only fix this issue, but also inadvertently balance all of the currently Overplayed heroes in PvP by forcing them into power brackets that can actually deal with them.

I agree, the power calculation is whack

Right now I think there is no bigger issue in the game than this one…Please dev’s I would love to see a response about this… if players can manipulate their team power by not lvling skills it ruins the entire balance of pvp.

i agree, in my opinion theres 2 ways to fix this

knowing how HHG thinks they will probably make this a VIP feature though haha.

i myself am thinking of making another account and starting fresh cause of all the bad upgrades i made which make me fight meta teams - that in itself is a problem, how can an “upgrade” ever be bad?

now i understand that twinked out teams will always beat standard teams - which is why i suggested option 2 - let players demote their heroes so that they can experiment as much as they want to, to find the right balance that suits their playstyle.

I totally agree aswell! I’ve found myself trying to figure out things I shouldn’t level up, which is not a level of min maxing I want to be! I think the easiest fix is to remove skill points as a factor all together! They are not a paywalled aspect of the game, and for any given character you could pretty much max them for less than a days income.

I’ll disagree on some level to say that the score system is ultimately much more fun than a ranked system, as it encourages you to build a broad roster rather than max a few guys, and I think that’s a good thing. I do think that it should be hard stats that effect power rating, and In turn that would reflect character and promotion level. (but perhaps not promotion skills, although I could see yet another level of tweaking where you take characters to gold while keeping them under leveled and maxing their gold skills.)

Any incentive to keep characters propsfully under developed is a bad game design imo. 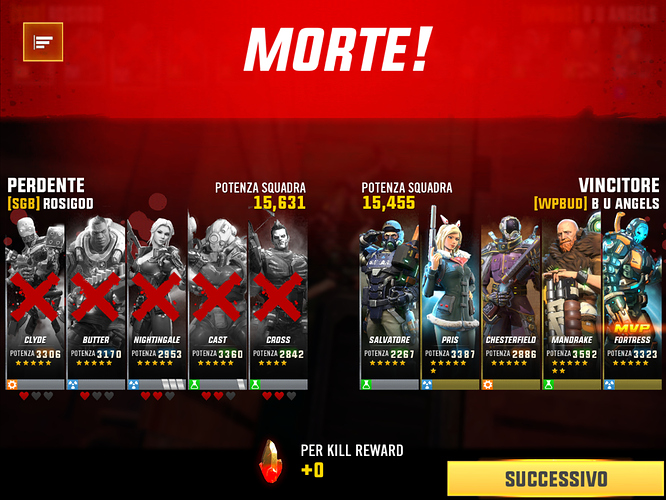 I repeat: the current power calculation system (and sometimes matchmaking too) is broken.

I hope you are gonna fix this issue ASAP. 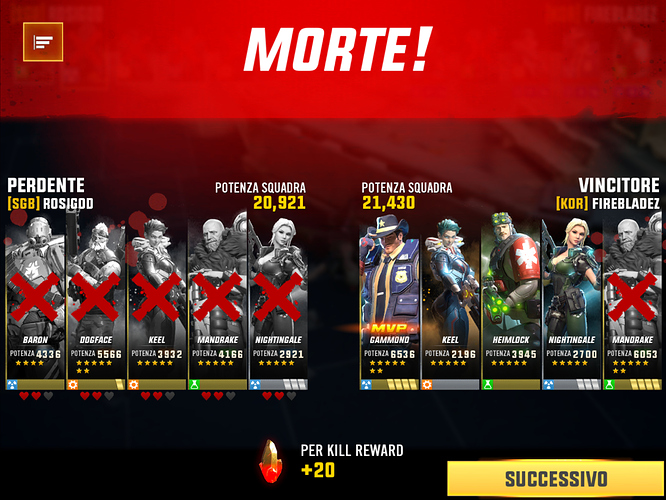 I have hundreds of these types of screenshots, I am also guilty of doing it myself because I am forced too. My power is listed as 20k but it’s much closer to 23-24k. I have no choice but to do this if I want to get shards.

Fix it and I will be happier. I know on an even playing field I beat anyone. Right now though, there is no such thing.

Wish we could get a response about this, kind of a big deal.

After reading, I realized how I am being matched to weirdly poweful toons. T_T

This game quite entertaining, but equally broken. Shame.

Just going to go ahead and keep this post rolling until we get a dev in here to address this. More than half of the current heroes are essentially useless until this is fixed.

I’m sure this isn’t how they wanted their pvp to work… I would actually like to try out some fun team comps in a fair environment. Lets give poor (insert one of 5 generic, abused heroes here) a break eh?

This is an important issue. I barely leveled up any skills, and I was having an easy time on PvP. With the alliance events giving me a lot of cash, I decided to upgrade all my main heroes skills from lv 5-10 to 40. Now Im fighting lv 55 players on PvP and they destroy me. Why am I being punished for improving my team? It went from matching me against lv 35-40 (Im 40) to lv 45-55. Power score score shouldnt value skills point SO high. Upgrading a lot of skills feel like a bad decision and you get punished for it 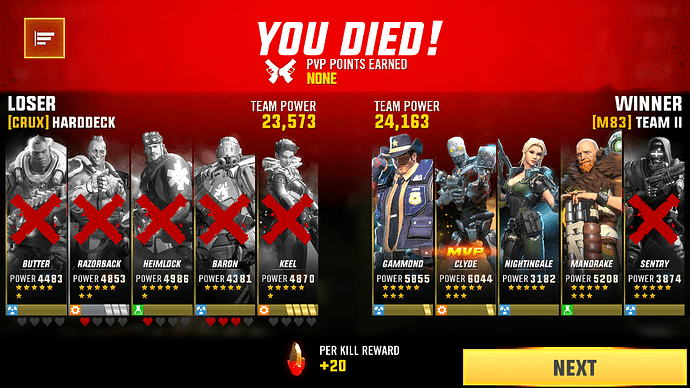 I can think of no better example of a broken pvp system than this. I checked, and he was min maxing skills out the ass…

Wow, I never knew upgrading my heros could be a disadvantage!

Did you know @Howitzer and @Huginn ?

@Maadmatt, we’re doing our own investigation into this.

Thank you, you will be shocked just how many heroes are op because of this. Players shouldn’t be punished for doing what the games suggests you should. Just have the power calcs assume max lvl and things will change drastically in pvp

My simpletons view would be similar to @Harddeck, if the power calculation either assumes that the hero’s skill levels are equal to the hero level and rank, or don’t factor in skills to the calculation at all, that will probably balance it out. Probably. Definately maybe. Almost certainly. Hopefully?

Like I said, I’m no computer game developer, so I know not much of what I say, but thanks for listening anyway.