I just tried to beat brutal and failed. I don´t have the best Patriots team, I would call it average but I did beat the first two stages with my heroes having 90%+ HP left and some even have Phalanx shield active. I fight good against Galante and then Dogface spawns, immediatly casts his skills and whipes out my whole team. That´s the most frustrating stuff I experienced in this game. If I get to the last stage of a raid and the last hero spawns with my heroes still having more then half of their HP I should be able to beat it.

What do you think about that? Should raids like this just be done with all five heroes beeing 8* Gold? Or should there be a chance to beat it if you just play well?

Keep trying it you’ll get it eventually. A lot of people swap back and forth between sapphyr and flatline so flatlines heal isn’t wasted. I chose to micromanage surge and just let them do their thing and kept dogface stunned as much as possible til he was the only thing standing and then my team wiped him out without much issue and my team sounds close to yours.
8* Plat Flatline 8Gold Surge,Fortress,Sapphyr no bars on any and 7Gold Phalanx no bars.

Thanks for carefully reading my text…

If my team would be like yours I would have done it with ease. The question is if Raids should be designed that the last stage is beatable just with Herores like yours or if it shpuld be possible to do it with an average Team and some skill.

To be honest, the raid itself is not hard. I mean the bosses. Sure, they are Plat, but you fight only two at a time, so its easy, even more with strong CC like Surge/Flatline.

The problem comes from the match up. Magistrates is like the worst choice for a energy faction like Patriots , having two of the strongest mech hitters and a almost immortal tank who keeps shielding itself is hard.

Also, Patriots only have 5 heroes, one of them being locked behind boxes, so this raid becomes almost impossible for people without her (you may need 8/9* plats to do, and even then, you may struggle)

In my opinion, choosing a energy-only faction with only 5 heroes as featured was the real mistake.

This month’s faction has 8 heroes, and while it’s heavily oriented toward one element, it has mechs and enough heroes to play around with formations. I hope they keep future featured factions like this and don’t make the same mistake they did this month choosing such a limiting faction

My Patriots team is power 32k and I don’t stand a chance here.

I would even say they got the three biggest mech damage dealers with Hardscopes rocket launcher as third. You also only have one healer who can only heal one companion and not even herself.

The raid itself isn’t the hardest, I agree. It was easy until brutal. I got to just dogface without Minions and Galante left. But once he casts his skill I don’t stand a chance. I can stun him for 8 seconds and if I’m lucky even lift him up for a few more. But not long enough to hold him off, kill Galante and then kill Dogface, before he casts his skill.

I think they made the first mistake putting together the factions.
In patriots you have no real damage dealer. And not a good heal. You have to go against elemental disadvantage with just tanks and specialists. Same with klg black ops. You got mostly low life damage dealers in there without some tank and caine is a great support, but as an stand alone healer he sucks.
They should have been more careful there, making the factions balanced teams.

Im personally okay with the factions not being totally balanced, since you can mix factions on most game modes, and these events add restrictions to make the game more challenging and incentivate the use of ‘forgotten’ heroes.

And it kinda makes sense for Black Ops to be a bunch of specialist, without a bulky guy on heavy armor, from a story point of view.

But this month mastery raid is badly designed, in my opinion, for these reasons:

And don’t get me wrong. I cleared it on my first try. But only because I was lucky to have Phalanx unlocked and 3 out of 5 Patriots were already gold when June updated started.

I love that non-meta heroes like Elite Rifleman or Operator can be on the spotlight with these events, but maybe using the strongest counter for a faction that is hard to upgrade and not really balanced is not the best approach

I also can’t beat brutal, I have the same problem as @WalleWu sapphyr is the only real damage dealer, but she’s useless against dogface, her speciality is to deal good damage, but prioritizing in health blocking, the rest also don’t stand a chance against him.

the only way this is probably possible is with a 7* platinum phalanx, but again it’s really weird we are fighting a full mech team in the last wave with an energy team, and no way to switch around.

This was almost the same with the fortress coop 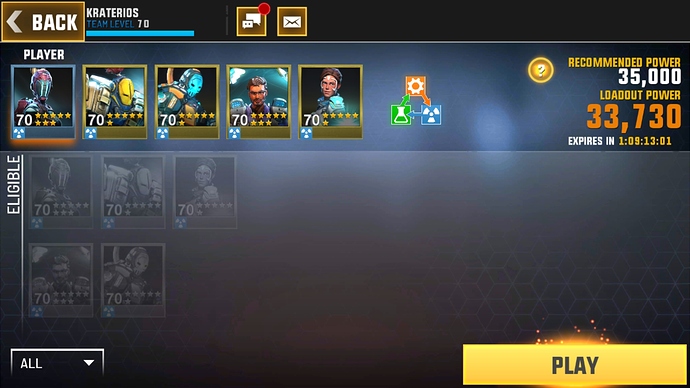 We have a VERY similar team. Your Phalanx and your Sapphyr has one more star than my counterparts. We’re screwed.

This kinda makes me not wanna invest in UAF this month because when the showdown comes I’m still not winning.

I didn´t really invest in the Faction heroes anyway, cause they are usally not the heroes I need at that moment. And it´s not worth for me investing tons of elemental frags to gain 30 Cinder frags. Luckily it looks good for me with UAF.

Most frustrating with the Cinder raid was that I really tok time for it, testet, changed, found tactics and in the end dogface destoryed it all in seconds

Yeah, I came really close, destroyed galante and dogface half his health away, but then his spike came and it’s game over

Well I did it, 5 seconds left but I got trough

Thanks for the tip @VonHorn