Panzer's Bronze Skill (Breach and Clear) is too strong

Every time I face Panzer she skills an electric squishy at the start of the round with this ability.

There is no counter if you run with Halo, Nightingale, Flatline, Sentry, Sapphyr, Pris - they will be dead 2 seconds into the match and you will probably lose (badly) to a 5v4 power play.

Even other matchups like Mech squishies or tankier electrics like Heckler will die in <5 seconds when she follows up with gunfire (her guns are designed to deliver strong frontload damage).

I hate this kind of auto-lose design. I think most people aren’t seeing the effect yet because Panzers are still pretty rare - and high star Panzers are extremely rare - but I’ve played enough to see them and see that a 5 star Panzer will easily one-shot any 5-6 star electric backliner. I’m honestly disappointed this got through testing, who thought it was OK to make a roundstart ability that can 1-shot heroes?

Edit: After playing Panzer and seeing first hand how broken she is, I’ve settled on the following nerf:

Do not make her Bronze start fully charged. Even if you nerf the damage it would still be enough with her auto-shotguns to destroy most electrics in <5 seconds. Nerfing the damage would also reinforce the worst aspects of her design - her shotguns and plat skill already make her an “opening burst” hero, if her skill is the same then her matches just become a simple binary outcome… either she blows up an electric hero and cruises to an easy 5v4 or she doesn’t and becomes dead weight. Keeping her bronze damage but making it start at 0 charge means she can use her guns for a strong opener but if that fails she can STRATEGICALLY use her Bronze to try and KO a squishy electric on a healer comp. That gives Panzer some depth to her gameplay and encourages both sides to think about how to stop her. Also, there’s plenty of other heroes that could use buffs and one of the first ideas you should consider is making one of their skills start charged (Beck’s disabling shot starting charged would be VERY interesting).

What I don’t understand is how players with approx 150 days worth of play are 10 starring all new characters and half the existing line up. There isn’t enough fragments from bounties or farming and only 400-500 can be bought from character specific chests.

Panzer does not need a nerf.

There is no counter if you run with Halo, Nightingale, Flatline, Sentry, Sapphyr, Pris - they will be dead 2 seconds into the match and you will probably lose (badly) to a 5v4 power play.

False. Panzer has not one, but several, counters.

If you choose to play all or more than 1 of the Energy heroes you mention, you run the risk of facing Panzer. Guess what - it is not compulsory to play these heroes. There are 50 other heroes to choose from.

If you nerf her only ability of value she would simply be a slighly upgraded Ryker, and I am sure it is not the devs’ intention to give us that.

Basically, players need to find a way to effectively counter Panzer, not nerf her. Or find alternate strategies to take into account a team which may have Panzer.

But annoying still has counters, even bio can shoot out cover to cancel the first recharge or you can add heroes like Phalanx, Caine, Dogface, etc. to deal with him.

There is NO counter to Panzer except to simply not play more than half of the electric heroes. There is no hero you can add that will stop her. Flatline is the only theoretical counter but since she’s the priority target for the skill, there’s nothing you can do.

You can’t dodge it, nobody else has skills ready, you can’t even break cover to cancel because its firing by the time you can shoot.

The only people I’ve seen defend her are, surprise, the ones who spent $40+ worth of gold to get her starred up ASAP. It’s not surprising these people want to protect their money but the fact that they seriously think that “dont play electric backliners” is a valid defense to an instant kill move just shows they really dont have a serious argument for keeping this move.

Right now its tolerable because she’s still rare. But the Panzer raid started and it’s only a matter of time now.

Edit: Sing I’m obviously not talking about using all those heroes at once, I’m saying if you use any of the electric squishes you will lose them instantly and then your opponent gets an easy 5v4 stomp

The only people I’ve seen defend her are, surprise, the ones who spent $40+ worth of gold to get her starred up ASAP. It’s not surprising these people want to protect their money but the fact that they seriously think that “dont play electric backliners” is a valid defense to an instant kill move just shows they really dont have a serious argument for keeping this move.

Wierd argument. I also bought the Oracle crate and the Flatline crate… I should be asking for a Panzer nerf then??

Dude, I have a choice whether I want to play Oracle, Flatline, or not. With Panzer in the meta… maybe I will maybe I won’t. If I do then I better factor in Panzer. That’s all.

And the only ones defending her aren’t people who have her early. I’m a big advocate for not needing her, because we got two poor heroes back in March, Fischer and Galante. Neither could do their intended job very well, and it was extremely disappointing for me. But the past few heroes, Caine, Oracle, Cinder, Sapphyr, Callidus, Flatline, and now Panzer, have all been doing their intended jobs pretty well(Callidus could be doing hers slightly better, but that’s for another time). I’m glad to see a new hero enter the game and shake things up. With time, either we’ll find counters for her, or she will deserve a nerf. I’ve heard plenty of other heroes that people cried for nerfs, and they were much more deserving than Panzer is in this case

Panzer can be a good hero and a good source of burst against electric squishies without a 1 shot kill undodgable skill.

I will have Panzer next week at the latest but I am posting because the PvP design of “oh you played ______, guess you die” is terrible. I think Flatline and Drake are OP too but I dont complain because at least their OP skills add strategy. Panzer skill is just bad design that pushes matches toward rock paper scissors simplicity.

I wanted to open this thread too.

The problem is that you can´t counter an instant hitting skill. You can counter everyone else, because you got time to charge your own skills. Flatline has low Hp and can be killed bevore her revive skill. You can still kill heroes protected by Mandrakes Gold and you can cancel or even block Fortress Silver. But there´s nothing you can do against Panzer. You can only take it and hope you will survive, roll around and hope for a fast Heal. Second to that on Platin her weapon even get´s bonus Mech damage, so it´s easy to do the rest, to kill your energy Hero.

My suggestion would be to make it neutral damage. Still a good and usefull skill, but survivable for everybody. Same damage for every element can even have some advantages, since you can´t use it against Bio heroes now.

I must agree a little, a 9* gold 4 instand Kills a Nightingale 9* plat, she dropped 1 second in the match.

most of the time i cant get full damage with panzer,why?because most of the time the enemy is not on full health and it usually only hits one target.and once the community has her,you will see her often,so no point whining as you will get her too

I think the bigger problem is the health heros have, since a lot of skills can one shot an other in a second, fortress his Regen kills every bio in a few second charge, panzer kills almost all energy hero’s in 1 second.

I’m not calling for a nerf, but more health on hero’s might give more interesting fights imo

How about Breach & Clear:
Fully charge at start. Deal xx.xxx damage to Target. If target was at full helath, stun target for 5 seconds. Give Panzer a shield in this case also.

I’m one of those with a 5* Panzer and while I can’t say she’s killed someone in 1 second yet my variation of her Bronze skill sounds like a compromise. 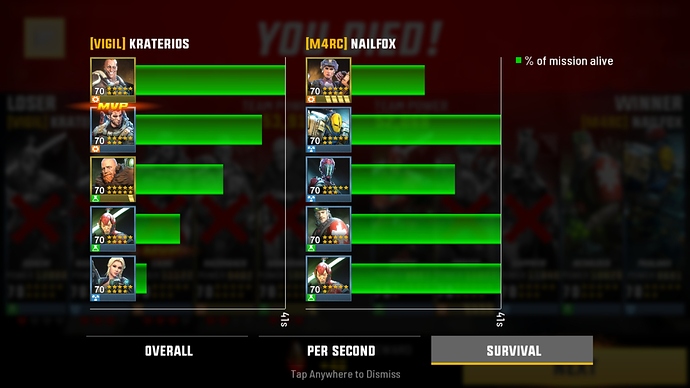 Somehow it didn’t save the other 3, but that’s what I meant.

A lot of hero’s are starting to feel to squishy, so I’m not calling for a panzer nerf, but instead calling for a hero health buff

GG @Kraterios, that was last night I guess

Nightingale isn´t that squishy. She sure has not he highest HP, but thats something most of the backline heroes suffer of. But to compensate that she is small an at the backline, making her harder to hit. But you will have the same problem with Sapphyr, Surge, Halo etc. In short with every Energy hero that is not a tank. Even they will get in trouble, because of Panzers Plat, doing the rest.
The fastest heal you can get ist from Nightingale who obviously will be dead within the first 3 seconds, making her useless. Every other heal will take longer, don´t know whos next, but he will take 10 seconds or more to heal, giving your Energy hero no chance to survive Panzers attacks.

@Nailfox, yes that was last night haha, but I faced some others, I can solve this if I make my phalanx or heimlock better to take a little bit of a better punch, but it will take some time.

But I’d like to see a brawl, with just the health increased with x1.5 or x2, just to test that once out, for all hero’s no specific type. I really think it will shake up the metas and the complaining about dogface, fortress etc being to op.

How are your thoughts on this?

Would like that, too. Would be great to play a bit longer then the first proc of the damage dealers.