Does anyone know a good team to use in Pvp? With Panzer?

She’s really good with dogface. Panzer is great early in a fight and Dogface is good later in a fight. Also Dogface’s plat is really good for shotguns.

Running her with a Flatline and Mandrake is pretty standard. Can also run with a Caine, Moss or a Keel for extra healing.

Last slot could be for whatever you want. Butter’s shields are really good for absorbing biochem damage. You’re not likely to see a bio heavy team so you usually dont need to worry about it, so feel free to swap in whoever.

How dare you forget Surge and a faster reload rate, which just so happens to be Panzer’s Achille’s heel. Tsk tsk.

Thanks for the tip! I might use halo with her plat skill

Panzer, Keel, Heim, Cinder, and Matador is a good team to use. Panzer will shred early while cinder builds up steam, w Keel and Mata heal playing off each other, it’s tough to beat even with Kurtz.

What? You would get destroyed by an average player!

isnt Heim a healer as well? Sorry, i dont use him that much

Too bad I’m not average. I rank top 100 every single PvP tourney. 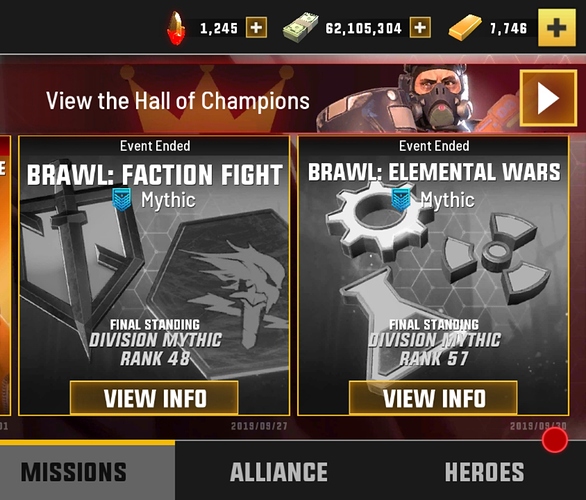 What kind of team you use?

what kind of team ya use

I replied earlier with my Panzer team. Scroll up.

This is funny. The mythic rank barely has anyone in it. If you are 1.25 mil power you are basically top 100. Sorry but that was misleading

Yeah he is, short term healer(can also sub him for phalanx), he will keep your team alive long enough for Keel and Mata heal to kick in. Cinder and Panzer will do ur dps, w Keel helping as well.

& I barely even play PvP now a these days. Even before Mythic I was ranking top 100, but okay lol

If we went by Elite points, I would have ranked 141 & 123 in last 2 tourneys, without using my full PvP roster.

Top 100 isn’t really something to brag about. It’s usually the top 10 that’s a league away from the mere mortals. But Heimlock is indeed a good counter to Kurtz with his cleansing.

You misunderstood me… I said that an average (a not so excellent) player would destroy you. And being in mythic division doesn’t mean you’re a good pvp player. And I rank at least top 10 in every pvp in all division I have been since I understood the gameplay so…