So I decided to purchase the Panzer crate up to tier level 4. I got Nightingale frags, Butter, another Yanlong (sigh), another Razor, and at last, Panzer.

At least I didn’t get Oro, Ronin, Steele, Surge and Operator again (they really depress me).

So I leveled her to Silver and reviewed her stats. Some observations I made:

Skills wise, her bronze skill gets her a starting blast which is good against Energy heroes and can easily take out weaker ones like Sentry, Nightingale and Sapphyr within the first 5-10 seconds of a battle. I believe, but haven’t tested, whether she can do the same against Flatline. It should be the case but I haven’t seen this in action personally yet.

Based on this skill alone she can own low level pvps against these fairly common energy heroes.

Her Silver skill seems underwhelming and not better than Hideo’s bronze which also shoots at every enemy on the map. Because the damage seems somewhat low, I didn’t get the shield to proc much. If the shield procced then yes, it added more survivability which was nice.

She is also, as expected, tankier than usual and I’d say she’s around Razor’s level, pre-shield. She feels more durable than Savage.

I haven’t levelled her up to gold yet so can’t say for her gold skill. Her gold seems interesting, giving her more power when down on numbers. Her plat gives her additional upfront damage at the commencement of battle. This could work against her gold because if you successfully delete an energy hero at the beginning you are UP on numbers, not down.

However… and this is a really big point: Her reload is really clunky.

On manual mode after the first clip is spent, her reload stutters and you cannot shoot properly. She has an extremely small clip of 1 bullet. This is damn wierd because on auto play, you can see her firing continuously.

On auto this is worse. Her reload causes her to be animation-locked and she continuously performs the reload animation (kinda like rocking back and forth in cover), which only stops when either her bronze or silver are charged up and she fires them off. Because of this I have lost all my games while piloting her on auto. She simply refuses to get up and fire,.

This HAS to be a bug. The only way to get her to begin shooting again is by moving her between cover while she is animation-locked (but you then expose her to enemy fire). She then fires normally again and her clip seems to be larger than 1 bullet.

She is an average hero.

Mech is a crowded space. There are better heroes - Dogface, Razor, Caine. Apart from her ability to delete a weak energy hero at the start of a battle, she brings very little to the table (up to silver).

You will not get your money or PVP hearts back. Don’t wanna be rude, just realistic so you don’t live on the hope.

My Panzer is similar to yours. A good hero. I like her. I have 20 rounds in my clip though. Odd you have only 1. Please provide a screenshot or even better, a video showing you playing your Panzer!

Most people won’t get most characters to Platinum, at least not anytime soon. And most Platinum skills don’t add anything new, just boosted stats.

Erm I don’t see you reviewing Panzer or any Hero for that matter.

Will get her up to Gold soon, day or two. Will update then, despite your dismissive comments

Here’s my Panzer. Nothing wonky about her fire rate, on the contrary it’s refreshing and cool to use a shotgun hero with 20 rounds where you can hold the trigger down for continuous shots.

You will not get your money or PVP hearts back. Don’t wanna be rude, just realistic so you don’t live on the hope.

Of course not, I willingly paid for the gold to get her and no one forced me to. It is difficult to convey humor over a written page on the internet.

What do you think of her Silver? To me, it is not a top-tier silver skill.

Her bronze is nice though, but again, I don’t think her overall package looks top tier enough to displace other tier 1 candidates.

Thanks Markus Eriksson for the video, can I trouble you do a PVP with Panzer and let me know whether you encounter the wierd reloading thing that I mentioned in my post?

Most people won’t get most characters to Platinum, at least not anytime soon. And most Platinum skills don’t add anything new, just boosted stats.

pretty sure u know what your talking about lol

Erm I don’t see you reviewing Panzer or any Hero for that matter.

Will get her up to Gold soon, day or two. Will update then, despite your dismissive comments

Been there done that about 15-20s wipe out

Her Silver skill doesn’t do much. I have it at level 50 only though, but 6000 damage / target isn’t much. But it’s nice that her targets can’t dodge it or anything. Of course I don’t expect everyone to do whatever Oro does (50k+ damage to each enemy). I’ll pump it up to 70 shortly and see what happens.

And sure I’ll try a PVP with her.

Now I see what you’re talking about here.
When her ammo is out she’ll start pumping ammo back into her shotgun but only only round / time so if you keep shooting she’ll load one round, shoot one round, load one round, shoot one. The longer you allow her to reload the more you get to shoot. Yeah this is a bit wonky! Or maybe at least it’ll take a while to get used to. It takes her very long to fully reload.

pretty sure u know what your talking about lol

I’ll ask Superfine to take down all his videos covering non-Platinum heroes.

In fact all the hero guides I’ve been reading and gotten a lot of help from have listed mostly Gold heroes. I don’t know why you are trying to infect the forum with bad attitude. If I misunderstand you for trying to be a funny guy I apologise what I just wrote.

And yeah, while I agree there are stronger / better mech heroes in the game I guess one more doesn’t hurt. Like everyone else she has 3/4 hearts in PVP, can probably get you an additional win when your Dogface etc. are already down.

@ULFPAM, let him be, with his off topic accusing gold farmer comments…

Playing Panzer with “empty” magazine is actually kinda good. She shoots, ducks, reloads, stands, shoots, ducks, reloads etc. a bit like Bolt but you can hold the trigger down for the continuous effect. Makes her a bit harder to hit and to be fair doing this doesn’t destroy her fire rate completely.

In this video you can see her reloading mechanics. Sorry for all the stuns.

And no bullying me for mistaking Moss’ healing cloud for evil Chesterfield’s flare near the end.

Oh, so she has a partial reload where she reloads one bullet at a time?

If I understood it correctly, it sounds fantastic. If a hero with long reload gets stunned/stagger, all the progress he made toward reloading gets lost. Panzer won’t

Also, if an enemy is almost dead, there is no need to wait for a full reload. Just load a few shots and kill them.

I don’t own Panzer, but this sounds like a nice mechanic. And unique, too, since no other hero has it (as far as I know)

Panzar is a great Mech Hero and welcome addition to the PvP line-up.

She is a well thought out Hero and ability to compete with Razor, Clyde, and Dog who are your typical PvP Mech Hero’s.

There are pro’s and con’s to any Hero, but Panzar has more Pros. I strongly disagree with most of the posts here about Panzar being clunky or slow.

Awesome jobs DEV’s on Panzar. Everyone in my Alliance is getting her and working on LvLing her up!

I think her biggest problem is that she contributes to the metagame where you try to blow up an enemy hero 5 seconds into the match and then steamroll as 5v4. Her most prominent mechanic is basically offering a ton of frontloaded damage with a full mag and her bronze skill.

Any electric squishy is a free kill for her and I don’t like that concept at all. I start a match against silver Panzer 6* and by the time I have control of my character she has killed my 5* gold Flatline. Same story with Nightingale, Sentry, Halo, etc. - high * Panzers are still rare but people are going to start seeing a lot more of her soon and it just feels lame to lose hearts in PVP because someone else matched a high * Panzer with a bunch of other 4-5* but unlike other teams that use that trick with Dogface/Fortress/Razorback, you have no chance to counter Panzer since her skill is available immediately.

There will always be strong Hero’s no matter what Faction or meta. The point of PvP is to be a challenge and should be. I have a 10* Plat Panzar and she is no doubt powerful like other key Metas. But AI controlled, her power is limited like any others.

Any meta controlled Hero becomes more powerful and a threat. I have lost plenty and won plenty with Panzar. It has taken time and effort to learn what Hero’s to surround her with. But opposite players have learned how to counter and cause me to switch or let Panzar die.

The game is not supposed to be easy to figure out or become a breeze to fly through. It takes effort and time to master. Numerous players refuse to put in the time to master PvP or learn counters and strengths.

Joker and I are #1 in PvP because we have and will put in the time to learn strengths, weaknesses, and master PvP battles. Every shot and every second count. There are several strong players besides us who put in the effort and time to learn and they are a privledge to battle.

Panzar is an awesome Hero to battle with and face because she really makes you work to win. Why create a weak Hero nobody wants to play with and let sit on your roster?

Once again, great work DEV’s. She is a lot of fun to battle with!

Thanks for the review

I have been running panzer for a few days now and noticed one discrepancy her bronze skill is supposed to start fully charged this is not happening always especially in gauntlet.
Any thoughts on this guys 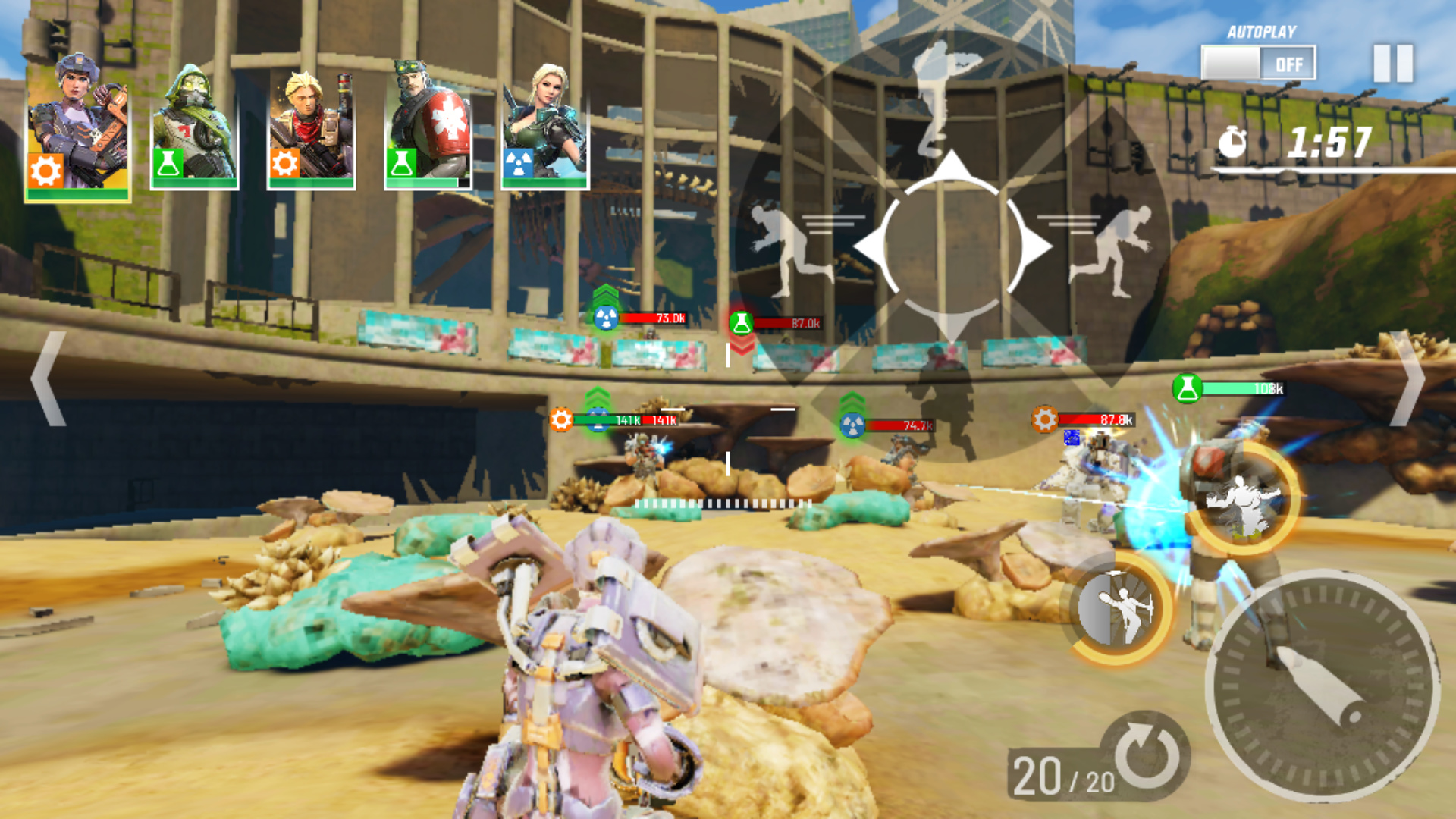