Panzer and her current state!

So I believe its safe to say a lot of people agree that Panzer is currently way to powerful, and that the ability of obtaining her with the right gold (in most cases), is salt on the wound.

Panzer is a great hero with unique potential to push for a different style of playing, but with great power comes great responsibility, and quite frankly, nobody cares and shoots for the moon because they know they can.

In the wrong hands, Panzer shows us that she is capable of matching, if not exceeding a Platinum Baron at cover breaking.

In comparison to Dogface at gold or higher, she can match the damage, while far exceeding the damage per second with a fast fire rate.

The kicker to all of that, is if the enemy player thinks the match is “too slow”, they simply use her staggering abilities to focus more of that scary damage, sweeping teams and never blinking.

This wouldn’t be such a concern (to myself and others who agree), but like any game with microtransactions, there are those with money to burn, and those without. Spending players don’t have to “invest” much into getting Panzer in their roster, which is combined with everyones easy capability of pushing new heroes to Silver, as I personally manage to do so almost instantly with the resources I collect daily.

This ease of access, combined with almost limitless power, gives players a unique change to something very strange in pvp, that I just experienced.

I would tell you about the first method to waste 4 team spots on the weakest heroes you have, and slap your Panzer in the 5th to scew the pvp pairing further and walk through wins, but this one is more desturbing.

You can easily have some weak heroes on your team, and slap in a weaker Panzer, and still dominate. If you don’t think that is true, here are the results of the pvp match that brought me here. Im hopes that future events and normal pvp grinding don’t discourage or anger the rest of the community, here and growing.

(PS: New users are limited so I can only add one photo, I chose the results screen showing both teams, and will figure out how to add the stats of the match as the second screenshot)

Thank you for reading. 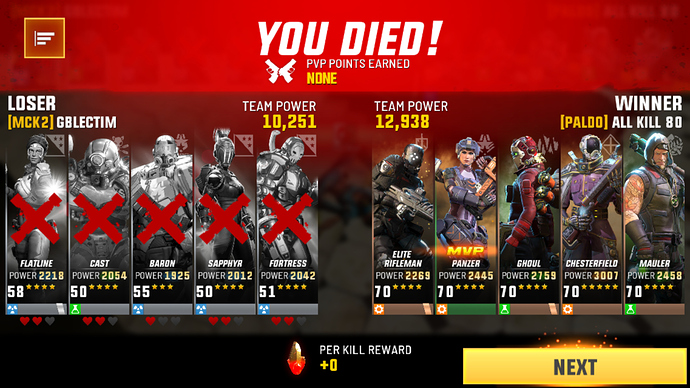 3 posts were merged into an existing topic: The SANE Panzer fix

A post was merged into an existing topic: Panzer is Overpowered