Opinions wanted! Who should I use to farm heronium next?

Veterans, any suggestions on who I shld focus on next to farm heronium?

These are my options so far

Anyways, I wouldn’t call myself a “veteran” here (11 months playing the game) but, inserting my two dollars, start Farming Heronium from the Hero you’re able to most easily obtain fragments for.

A little off-topic: how much did you pay? I see you’re VIP Rank 13. I know VIP Rank doesn’t affect much but I’d like to know.

I am a crazy addict, probably spent over 1.3k on this game… should probably cut down since i have hit the vip 13, the next best significant milestone would be vip lv10 (extra gauntlet reset to max your maven) which takes around 150 usd from the start

Ghoul and Fortress give the same advantage as Mandrake, being PVP+campaign.
So does Mauler, who you already have on your list.
You mentioned Sentry and Ryker; Cross also give the same advantage as Nightingale, 9 dirt cheap campaign missions.
Richter…I’m right there with you. Sure, 18 frags a day sounds good but what else is he good for? I’d be more tempted by 12 frags from Vanguard; Look at his skills on someone who has him at 10*! 850k extra health and shields at mission start, 650k shield ally, and (theoretically) a really fast cooldown on that shield-other ability. I dunno, maybe they’re not as good as they look, but they look really good.

Gauntlet resets are really cheap (20/40 as opposed to 100/250), so I probably wouldn’t push there. Dog can carry that side of the heronium farm just fine.

U are probably right, always good to be maxing a hero that is somewhat useful…

And yes that 250 PvP gem reset is a pain

I’m working on platting Vanguard now, so pretty soon I’ll know whether that 35%-faster-cooldown-per-ally is as diabolically awesome as it sounds or not.

Hey. You may already know this, but evolving to 10* is 2.5 million bucks. Someone warned me about this just in time for me to start saving on my first 10*, otherwise I would have been waiting another two days after I got to 1080/1080.

PS. Be careful who you farm when they rotate the stuff around with short notice 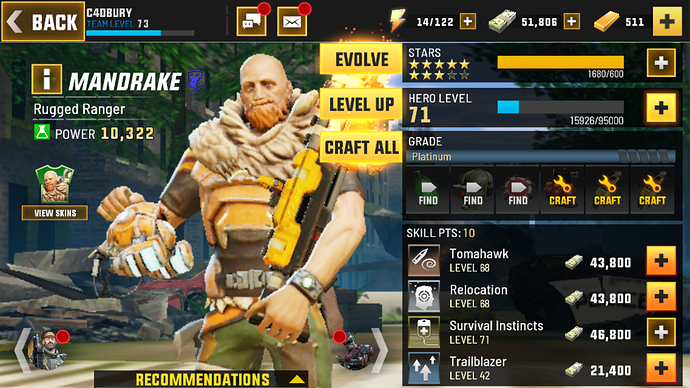 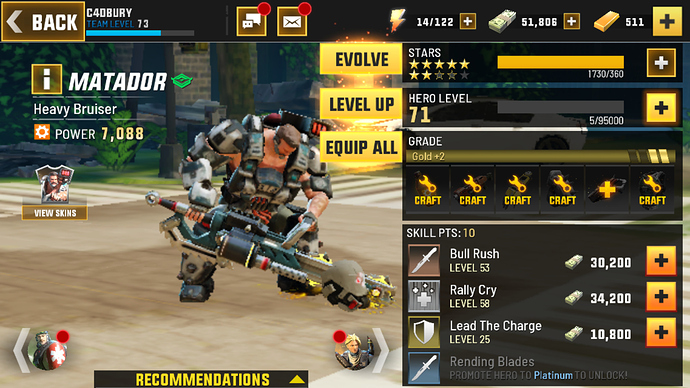 Im largely in agreement with IceKobold and Barnakol - easy farming of hard mode mission guys. Personally I would focus on Sentry, Maven, Ryker. Sentry and ryker have easy frags to daily farm and come in silver crates. Maven helps with gauntlet resets and is in dailies/later hard missions and even silver crates so shes even more ideal for farming than dogface. Plus i could be wrong, but having 2 gauntlet characters means less resets and for me that nets an extra 500 daily to get more heronium with (im VIP 10 though so i have the extra reset). Resetting just for dog means you will eventually need to spend 100 gems to reset gauntlet where as you wont go past the 40 mark with 2. You could also do flatline for even less resets, but i dont think nets many extra heronium (only long term) and flatline isnt exactly a priority to 10*.

Maven, Sentry, Ryker in that order?

Thanks for the ideas guys, I have already maxed my razor… Now I am farming Sentry who just hit 8 Stars, Chesterfield (9) and Mauler (9) daily… so that is already 6 heroes to farm from hard mode daily… I think that’s enough for now…

Screenshot_20181016-101700.jpg2220×1080 1.28 MB
I know I’m a bit late to this discussion but as a player that feels they have got the heronium game figured out. I had to post. My first 10 star was matador. Everyday you can farm his frags in pvp store as well as get free frags from quests. My next was dog face with the gauntlet reset farming. Third was clyde. Again, another easy pvp farming experience. Next will be my maven due to the addition of her in gauntlet and free frags with quests. Then it will be surge to 10 stars. Anything that I can get through normal gameplay rather than farming frags through stamina is very helpful. You’ll also find that once you have 3 or more heroes at 10. You start mining heronium like crazy. I currently mine about 100 frags per day. Meaning I purchase 2 different types. Hope this helps! Best of luck!

P. S. If you finished razor, use his heronium for a pvp farm hero.

Hi there, u are right to say that PvP farm heroes can get u many frags a day cos technically u are not limited by energy. When I started this thread, I only had 4 Max Star Heroes… now thanks to all the farming and the recent frag efficient Brogan Crates, I already have 10 (Dogface, Panzar, Nightingale, Artemis, Oracle, Heimlock, Razorback, Butter, Mandrake, Pheonix)

Personally the easiest/casual route is the hardmode guys who also show up in silver crate - ryker, gale, maven, dog, sentry, hardscope, matadore, surge and keel. You can also do Pris, cross, beck, and cast but they are lower on my list personally in terms of their usefulness. Just my pref though.

Cast has 5 or 6 mission for frags at the moment. Madador has a few too

This topic is almost a year old