With our November update, we’re happy to roll out a new Event type: the Bounty Event!

You are required to be part of an Alliance to participate in a Bounty Event; no lone wolves allowed! Work co-operatively to take out difficult Bounties to maximize your efforts. Don’t worry if you don’t manage to kill a Bounty Hero in your first Hunt, the damage done will remain for your next attempt. This means if you leave a Bounty with only 500 Health Points remaining, an Alliance member will be able to finish the Hunt. Co-operation is key to dominating the leaderboards! 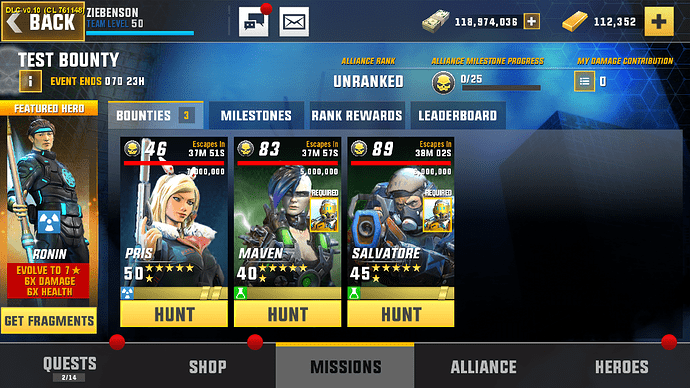 While this Event is active you’ll be able to discover new Bounties while playing any game mode, even while using Quick Wins! The difficulty of a Bounty is relative to the Team Level of the player who discovered it. Team Level 50 players may discover more difficult Bounties for their Alliance than a Team Level 20 player would.

During a Bounty Event, certain Heroes will receive bonuses when hunting Bounties. For instance, Salvatore could be a Featured Hero, receiving extra Health and dealing bonus Damage while hunting a Bounty.

The Bucks Exchange has been reworked to better meet the current state of the game. Previously, the Gold to Bucks conversion did not scale. We have adjusted this so that the Bucks payout is based on your Team Level. As you progress through the game, you require more and more Bucks to upgrade your Heroes. This change in payout for Gold to Bucks conversions will help keep the exchange a viable option for all users who find themselves short on a few Bucks. We’ve also added a neat system where it’s possible to get lucky and get double, triple, or even ten times the normal payout! 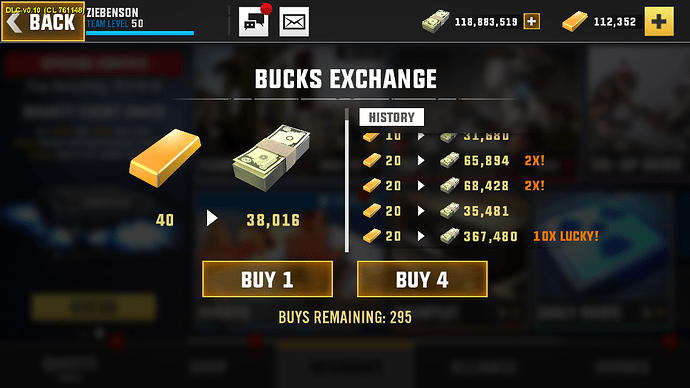 When you first launch Hero Hunters after the update, you may notice that the Main Menu has changed! We’ve made Co-op Raids more accessible on the main menu, instead of buried in the Raids menu. You will also have a better overview of available activities to you; for example, the number of Gauntlet resets or PvP Hearts available. These are just a few of the changes we’ve made to the UI. Tell us what you think! 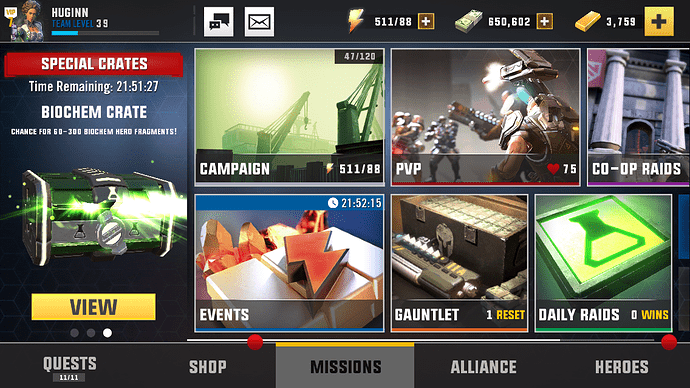 Have you ever wondered which of your Heroes was the real MVP in a mission? Well, wonder no longer! The November update brings a new post-mission feature which allows you to see how your team performed. With this new information, you can easily hone and refine your team to achieve new heights.

A cunning tunnel rat. Ghoul is one of only a few sewer-guides that can navigate the vast catacombs beneath the city. He controls the battlefield, laying traps and igniting enemies and – and the ground itself – on fire, dealing relentless Bio-Chem damage over time. Ghoul will be available as an upcoming PVP Reward. Look for more information soon!

An old sheriff. Gammond and his loyal deputies still maintain a semblance of law and order. This seasoned officer is an aggressive brawler that can quickly sweep through weak enemies, reviving fallen allies as enemies are killed. Gammond will be available as an upcoming award through Co-op: Assault on City Hall. Look for more information soon.

We have drastically reduced the number of Fragments required to promote Heroes from 6 Stars to 10 Stars!

If you have Heroes at any of these Star Ratings, we have given you Fragments for that Hero equal to the total Fragment number reduced for that Star Rating. For example, if you had a Ryker at 6 stars, you will receive 150 Ryker Fragments.

The Star Rating for your current Heroes has not changed, but you may be able to promote some of them immediately with all the extra Fragments!

This update brings new difficulty settings for this popular Raid, and along with it the chance to get one of our new Heroes! Get Gammond and gear up for the new Bounty events in November!

The Gold gear that was in this Raid has been moved to the Gauntlet. 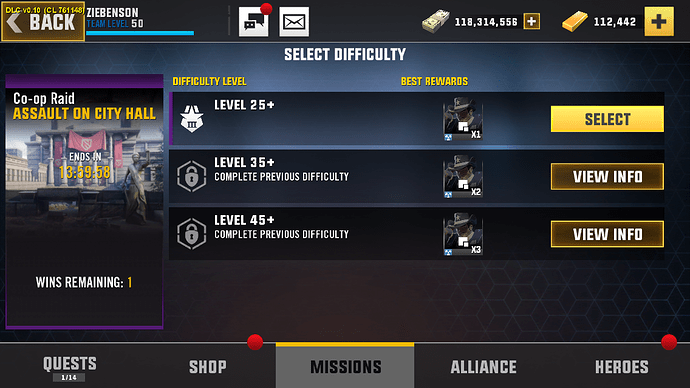 Halo felt underwhelming compared to other heroes with similar roles. As such, her abilities have had significant improvements to better support her allies with powerful heals, and a devastating multi-target attack.

Heimlock receives some minor rebalancing to keep his scaling in-line with other Heroes.

Modifying the ability to provide more ‘immediate’ damage, as well as making it easier to see/counter when/who is currently being incinerated, as the damage output is much higher than previous.

Sorry my mistake should have checked

Is 0.10.1 just to hotfix the team selection issues?

No, 10.1 was to fix other issues. Team Selection not working as intended in some cases is getting fixed in 0.11.