Looks like a new Hero is joining the hunt soon

! We’ll also be hosting 2 Bounty Events back to back near the end of this month! Please note that this back to back Bounty is a unique occurrence to allow this Event to occur sooner within the update and focus more on the new Hero and its Faction. 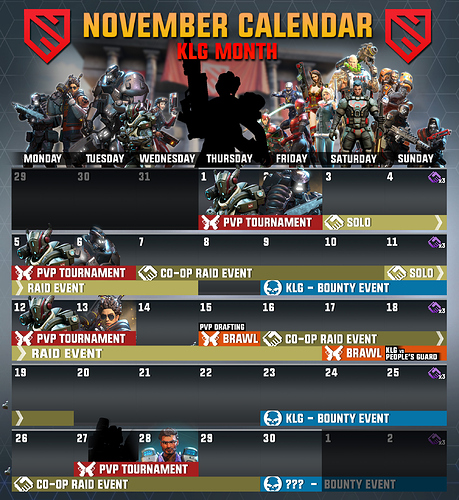 So 3 weekends of bounty this month?

How about giving all KLG Bio-Chem heroes a bonus for bounties??

and Surge is a featured PVP hero

And hooray only 1 pvp draft

Hope the update and the new hero come out asap instead of the usual teaser+more teaser+half reveal+full reveal timescale. (We aint got time for that this month, it is already Nov 5.)

Cheers and I am looking forward to the update!

Hmmmm, does the new hero silhouette look bio chem to you?

Its the other biochem secret hero!

Since Flatline and Oracle in June, out of the last 8 heroes only Ifrit was bio! (Oracle Flatline Panzer Ifrit Wesson Brogan Min Anvil).

Before Ifrit, the last bio was 6 months ago in May, Cinder who was released with Caine.

So I’m gonna call it a bio hero

But please, NOT A REZZER.

I also hope not a rezzer, rather a good dps or utility

I really hope for a bio hero also, I started saving bio frags up a few days ago (have 500 now) and I plan to evolve the new hero to 10* right away. But if this isn’t a bio hero my plan fails a bit. I was really expecting the bio hero they hinted in the draft video to be released now but this isn’t the same one.

Bio quick heal would be nice.
But with that big gun it more looks like a mech damage dealer. Has a similar shilouette as Panzer.

Wonder which fraction it will be. People’s guard would be nice, but with the brawl being this month it is not that probable.
I guess it is Shoreman. They had a brawl before and they have already some bio heroes.

If Shoremen: chances are big it’s a bio hero.
I kinda think it’s a KLG Black Ops hero since it looks like the coming month is a joint KLG / Black Ops / Irregulars thingy. But seeing the new hero in a PVP with Surge makes me think… Patriots? Another energy hero!? Or is Surge subject for a faction swap from Patriots to KLG? Traitor!

To me it looks like they start December early as the did with November making Patriots the next faction.

We never really could see the “next” faction in the monthly calendar.

Is there any holiday happening 27-28 November where Surge + “new hero” fit the theme?

I would also agree the blacked out hero looks to be bio. My guess is some form of bio chem hero as well (maybe the one in the pvp brawl sneek peek?). My guess is a Patriot since its coupled with Surge. However, I hope the bounty event right after doesn’t feature them. Having a new feature hero so quickly before bounty means most wont even be ready for it.

Does the above calendar mean all of KLG is featured? I see the photos at the top, but mainly see the Lawgivers as the focus so I’m curious what factions in KLG will be useful for bounties.

We had brawls with random heroes before, so it must not be a hint. Would be quite boring to again have a faction features twice. Especially since with Peoples guard, Shoreman and The watch we have three interesting factions that werent featured yet.

Fair point WalleWu - would like to see a Shoreman and Peoples Guard based events. However we did have Shoreman once right? When Fisher was new? Or was that a Patriot event with Sapphyr and he was just another new hero?

In either case, I could see both those factions getting some updates and a feature. The Watch less so since its only 4 guys (even slime with a fifth one as the new hero) and one of them being a 7* most dont have. Likely needs a few more options to get a feature. At least they are closer than the Rangers right?