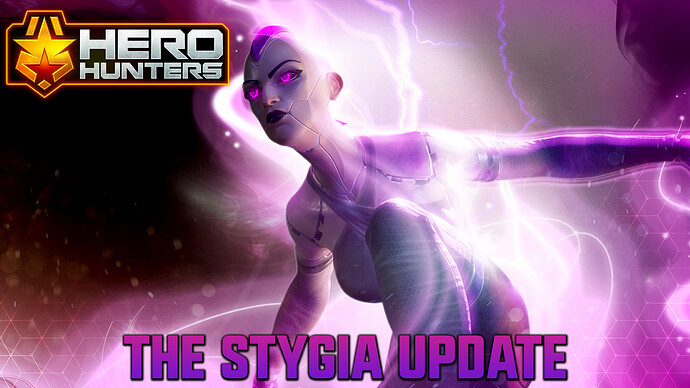 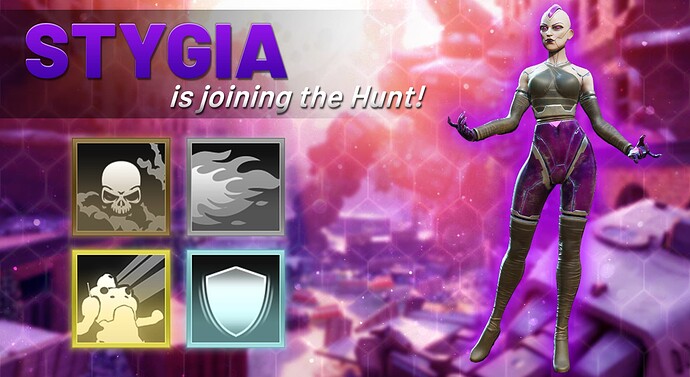 Stygia, “Reborn Chaos”, joins the hunt! A living embodiment of a nightmare, Stygia dominates the arena through restriction of movement and control. 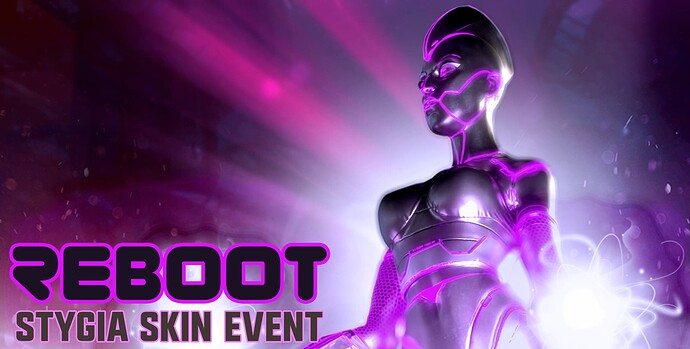 Take on the Reboot Co-Op Raid Event to earn Argon Tokens, which will give you a chance to win exclusive Skins like Stygia’s Rare Plus Skin, Argon!

Use your Argon Tokens to open Argon Crates, which cost 200 Tokens. Argon Tokens and the Argon Crate will expire Nov 18th at 11 AM PST, so make sure to use them before then! 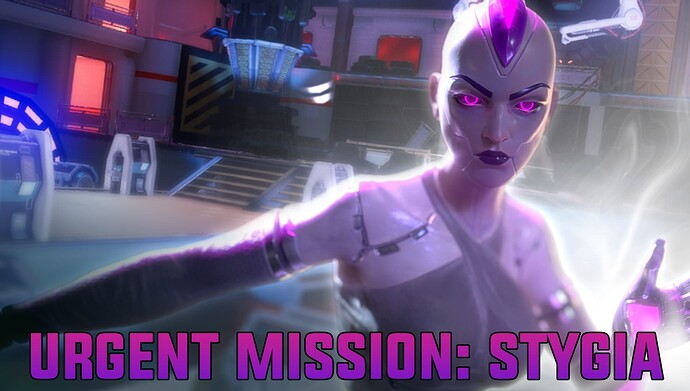 A new Urgent Mission requires your help! Join Caine as he launches a strike mission to locate and eliminate Stygia. Earn valuable rewards as you progress!

NOTE: ONE REWARD per person/donation. Individual Donation Incentive Rewards will be sent out, at the earliest, November 4th, 2021.

This update has me hyped! One question though, why is Caine trying to eliminate Stygia if she is apart of the same faction?

Are there any plans to increase the duration of bounty from Fri to Mon to perhaps Fri to Tues/Wed to give more alliances a chance to clear out the new Bounty Milestone Tiers? The new Tiers is a much needed change, but increasing the duration or better yet, increasing the size of the bounty summon as we progress in tier would help tremendously.

2 mil from 500k is a bit too much in my opinion . A lot of alliances don’t even get milestone 1 now. 2 mil will be nearly impossible for almost everyone except 2/3 alliances at max .

Otherwise the update looks cool . The new hero seems to be impressive

Please change the algorithm for spawning heroes, I can’t be ruby spawning gold and plat

This update don’t have any hero skin’s?

HH: How many times should we buff chesterfield: “Yes”

Awesome update. New hero looks badass and the skin even more. Looking forward to using her.

I’m not sure about the new milestones. It’s cool yes. But it’s barely reachable even for end game alliances. It’s just like ruby+ patrol crates.
I hope at least the rewards are good…

Also looking forward to what will be done with the elemental brawls.
And like every month. Please buff Pris🥺

New milestones don’t make this event more interesting. Grinding it’s never fun process. At this moment Bounty event pretty boring, but you atleast may does 3-4b total (1-1,5 hours per day) and get 1st milestone. With milestone which cost 2b points you will need literally live in this game. And for what? Unifrags? Plat equip? This is ridiculous. Last Bounty event has only six alliances does results for new 1st milestone. Six! From all world.

As for me Bounty Event don’t need new milestones. Bounty Event need global rework. I wrote this before – BE was awesome when all this started. Whole roster was used during 30-40 minutes. Targets may kill your whole team. You was needed make right team combos and cooperated with your teammates. Now all this gone – full roster use need 1,5-2 hours, your heroes never die, zero cooperation. Players literally just lose their time. Killing helpless mobs. And main problem it’s low scored targets. I was big fan of Bounty Event in past. Now I hate this mode and play this only for my alliance bros.

I really like this game, story, heroes, but not current Bounty Event.

From all world. Many peoples may just leave a game. If top alliances have competition between each other for glory and position in overall rating it’s ok, but when this start cut peoples from milestones this is pretty bad. Especially for newcomers. Goals must be doable.

I think you literally just said what i was thinking.
I agree 100% on every argument you said, bounty may need a rework. And so do many, many events.
Currently everything it out of place for every level
High level people don’t get what they need to continue their growth.
And low level people don’t get what they need either, instead they get a surplus of what they don’t.
It discourages players to play whenever there is too much grind, grind is fine.
But currently, especially at my level, grind gets boring. I’m having to spend 4 whopping full months just to get to a level where i can continue my growth. 4 MONTHS of constantly wasting stamina and resources and FUN just to reach a certain level, because without i can’t continue in anything, i can’t continue my bounty game, neither my campaign. Neither can i have any fun. I’m stuck at place!

While my love for this game is ever existing, i can’t lie that it’s starting to go pale. And i really, really hope the developer finally pull the plug out of their ears and start listening to US, WE are the ones who play this game, if you don’t attract more players, or keep the ones you currently have the game will start to die off and it will slowly transform into what FF has become.

We as a community provide you SO MUCH feedback. So much love, constructive criticism and we do OUR part to keep the game alive. But this won’t work out if the dev team doesn’t do their part!

We have already had wonderful player(s) go because of the state of this game, and there is only one way to get these back! And that is to start listening!

I really hope DECA will see this issue and correct it. To be honest, they might be our final hope for this game.

If an alliance contains below lvl 100 for its member majority, mostly their summons will result in plat bounty only…

To get the new #1 milestone (2M points), so every member should hit around 9B-10B, assume it’s pro rata… Seems 1st milestone will be exclusive, just for veterans and senior players only…

It will takes so much time to get the 1st milestone due the low level summons (plat and below), not to mention the bucks burned for summoning…

Anyway, this event already planned and will happened anyway, I just hope every summons will get a better rate for big fish bounty…

Like that elemental brawl changes is mentioned but it started 2 updates ago. Honestly really missing the headshots bonus. Also the headshot only to do damage to bio makes it seem to me that they don’t take damage from skills. When it comes to players who run on auto they gain a disadvantage killing bio. Personally I enjoyed the bucket skin glitch so much because she only took damage from skills. Why not make one element immune to skills and one immune to basic attacks

That is something they might do in the future. It is stated that they will change these effects up every time. Or maybe once a month i dunno. I like it, though it would be better if the multipliers actually did what it says. Because 3x fire rate for bio’s felt more like 0.3x

Hmmm no more new skin for existing heroes which means no guaranteed event? Then I smell something new or an ff hero would be imported again?

It didn’t work like it was supposed to. It was like the time between shots not fire rate that got increased 3x. The update before had energy fire rate .5x or something was wiping everything out with commando in seconds it was awesome. I read it then as energy shot slower but it was opposite. So heroes skills like commander increase fire rate 15% and we know that’s faster. How does it not work that way in elemental.

But that being said I like changing it up and making stat changes I just think the best part of elemental was the headshots bonus. it made Artemis phantasma elixir prophet hardscope all those less used heroes it made then relevant. I don’t like that it’s replaced with forcing you to body shot elements. Can’t we try dabbling in increased headshot defense and increased body shot defense. And give an element increased body shot damage and another increased headshot damage. Just a thought I’m always excited to use snipers

Although if they keep rewards where they are in bounty and add new ones for the higher milestones then this update for bounty helps those crazy alliances that can do it and won’t hurt us since we cannot reach milestones 1 ever at this point. If this is the case then I am not too worried and I am actually happy…

I have been doing a lot more traveling on the weekends so playing bounty ridiculously all weekend like I used to is impossible and additions like this only makes one not want to play much anymore.

Oh well let’s see what happens and I wish a good day to you all. Cheers

After having Stygia and tested her in several game mode, I really like this hero…

Imo, despite of the difficulties to grind her due the lack of the required frags and canisters gears, she is another good heroes released by HH(/DECA)…

She is so good to the level : “I just wait for another complain thread about her being OP and requested the devs to nerf her down”