Not a fan of the coop reset 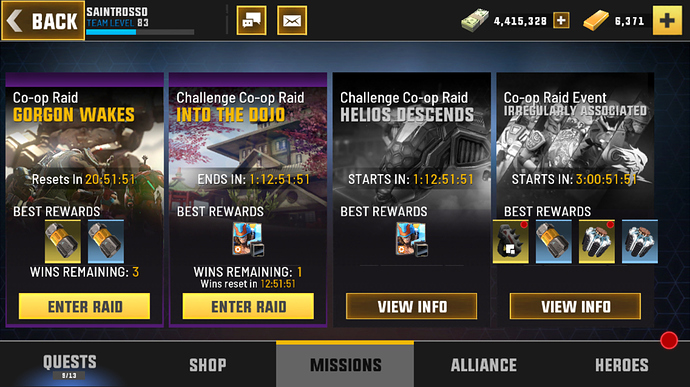 Im not a fan of starting over and losing out on 10 fragments. Had to rant on this pointless subject.

Ohhhhh, you bring up a good point: having to go through the difficulty levels to get back to where you were, therefore earning less fragments per day for a few days. That kinda sucks. Maybe it’ll be around for longer than Jarek’s “Into the Dojo” event was, which could more than make up for the loss.

Normally a new hero would be available im guessing with recent bug they need little more time for update and that has delayed a release of the new hero. I’m looking at it this way as Jarek still important in upcoming bounties anyway. More a delay for new hero than making us restart jareks.

It’s a completely new co-op event. That’s awesome. They could put fart.wav as reward and I’d still appreciate it.

I’m so with you on this!
I’ve felt this way for a while.
Seems a little silly and unnecessary for a Level 80+ player to be forced to complete a level 25 difficulty before they can progress to the next one…

I think in the beginning of the game’s release it was a good idea, since players were new and completing prior difficulties was involved in the process of progression, but a year has passed and a majority of core players are capped at the max team level from update to update…

I feel like the ability to play a certain difficulty should be dependent solely on Team Level, not completion of previous difficulty.

Meaning, if you’re level 70… Level 70 difficulty should automatically be playable at the start of a Co-Op event. We should not have to play 25/35/45/55 before we can play it if we are already at the appropriate Team Level.

But then how would they get us to spend gold on resetting so we can get to top level coop faster… Don’t forget they do this for money. Any ideas that would make them less are going to fall on deaf ears.

I’m so confused why this is even a topic and someone is asking the dev’s to look into this. Lol -people these days are so hard to please.

It’s a new event that runs simultaneously with the dojo. Any additional frags is a pleasant surprise. Ironically, there wouldn’t be anything at all to complain about if this new event didn’t exist at all. Takes all but a few mins (if that) to complete. So easy. To each of their own.

It’s a new event that runs simultaneously with the dojo.

I don’t think you’ve looked closely enough, because this is not true. This co-op is replacing dojo with zero overlap meaning OP has a perfectly valid (albeit extremely minor) point.

Guys, we get a new co-op event. Surely that has to count for something? It takes all of 3 days to get back to and complete the highest level again (without resets).

Now if they had switched back to an existing co-op (eg; city hall) … well that would be another story and I might be feeling cheesed.

Yes they could have done it so that the switch of co-op was at the same time as switching to the new hero as the reward.

Either way … I welcome the change.

I’m just happy we have a new coop, poobgloob made some valid points.

But if I want to reset for 80 gold I’ll play a few PvP matches and hope for the 60 gold, or I’ll just wait when I have gold, or maybe smoke 3 sigarettes less that day to save it for gold

The simple solution is just to extend the Helios coop raid period by 1 day and we are then all equalised for frag numbers. But really, this is a mountain out of a molehill. HHG does not owe the players an obligation to guarantee X number of Jarek frags!

Sheesh, we get a new raid, something new (and hopefully fun) and still, there is SOME GUY out there complaining…