Nightingale Gold "Nerf" is a joke

I’m glad HHG is finally starting to address Nightingale but the nerf to her stun barely qualifies.

Her silver mark still has an insane 66% uptime, and her mark still grants +15% crit on top of a large DPS boost.

So while thankfully the stun is 1 second shorter, during her mark (which is when her stun becomes the most dangerous) she now has a 23% chance to stun up from 15%. Throw in Caine and Moss and now Nightingale gets more stuns than ever. With those 2 and her Mark active, Nightingale will average 6 seconds (3 shots) between crits… on a 3 second stun.

I don’t think this is a buff to Nightingale either but it’s just laughable that PVP’s most powerful hero gets such minor changes. HHG, Nightingale didn’t need even MORE synergies, she needs to stop being the “does everything better than everyone else” support that she has become. In considering further changes you really should consider that 2 months ago crits were doing 2,000 bonus damage and they’re now doing 20,000 bonus damage… that crit buff has combined with the +15% crit from Nightingale’s Silver and caused that ability to go from “a strong contender for best ability in the game” to “uncontested best ability in the game”.

Before even the missed shots were calculated into the chance of stunning, now only the hit ones are taken into account. And since she is mostly playes by the AI she misses quite some shots.
All synergie heroes i can think of atm are quite squishy themselfs. And with an army of squishy heroes you will not win a match, even if she stuns once more a match.

And honestly, you seem to be the only one who has troube with her. I haven´t had any big trouble with her since her team heal got nerfed,

I think maybe that’s because he don’t level his heroes up properly while everyone got their Nightingale fully upgraded, so of course she appears very strong to his team.

She’s good, but you use it like this.
Same with your mandrake op comments.

You play like this, I know it’s your thing I use random stuff and try it out to laugh/have fun and you min min min beyond the min, no max used, but complain about hero’s

But stop using random screenshots to break this game to your liking, get a hero to platinum once, it’s not that hard 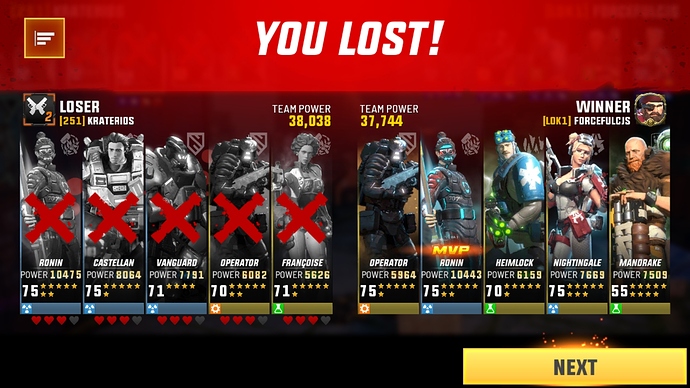 Nightingale is still OP as hell. I don’t know why you guys always want to disagree with Sogui. He is an excellent player and knows the game very well even if the play style is annoying. It isn’t his fault the game doesnt make min maxing impossible. By keeping heroes like that farming is 100x easier and therefore progression is also easier. HHG need to fix it. Don’t hate the player - hate the game.

I have found Nightingale to be just as overpowered now as previously and since I love using Caine there is basically no difference in the stun proccing. If Nightingale was a strong DPS character these forums would have had people crying for nerfs for months. I agree with everything Sogui has said.

It’s all about credibility man, even though he made a few valid points here and there
(sometimes me or many players agreeing with his points)

For example i’d play with much lower of power level / bracket (~15k power level), and i playing with specials type of comps, got top ranked with the kind of play style. After that i’m stating some of the heroes needs to be A or B. I doubt all players above my power level / bracket agreeing with my statement without any butting.

. I don’t know why you guys always want to disagree with Sogui. He is an excellent player and knows the game very well even if the play style is annoying.

Yes oh my god thank you. I can’t stand seeing people dismiss Sogui’s opinions just because he min-maxes. He’s proven that he’s an extremely skilled player through his draft placements (all heroes equal power) and his knowledge of the game exceeds virtually anyone else on the forum.

The fact that he min-maxes has NO BEARING on whether or not his points are valid. People disagreeing that Gale is overpowered are just showcasing their lack of game knowledge.

@ULFPAM @Kraterios @WalleWu - you three are all very active forum users and I really like your contributions. But seeing three well-respected forum names being so dismissive of someone solely on something that isn’t even related to the issue is pretty troubling. I get that you’re biased against him, but come on; that doesn’t invalidate anything he says.

If we don’t share his experiences, we must freely say so. I wouldn’t discredit the original poster definitely since he often make good points.

Nightingale is good, top notch! But I don’t have problems with her as she was OP. Then again I never stopped promoting my Panzer at Silver grade (for other strategic reasons than to beat the meta), partly because I know Nightingale is meta and that Panzer is a really good way of dealing with her.
To counter the meta you need a meta counter.

There will always be a best and a second best hero no matter how much they nerf.

Could you please show me where in my post I said anything about min maxing or whatsoever?

I agree with sogui on a lot of points, and that he has skill is completely true, but I don’t share his opinion on nerfing everything.

With kobold joining I think we will get a new meta, maybe we don’t even need Nightingale, but like I said in many other posts, I want buffs not nerfs

See, I’ve really never understood the whole “more buffs, no nerfs” argument. If all heroes have the same viability, then it’s irrelevant what’s a buff/nerf. Buffing and nerfing are relative measures of viability. They only make sense when you take into account how good a hero is right now. Every hero should have the same viability in an ideal world.

Saying that buffs are good and nerfs are bad doesn’t really make sense. If you buff every hero except one, then that one hero just got a huge nerf, because it’s a relative measure. When you look at the overall landscape of hero viability, you want them to be all equal in terms of playability. It makes zero difference to the PvP climate if you buff all the bad heroes or nerf all the good ones. It’s a net-zero result.

I understand the sentiment that people have when they say they want buffs, not nerfs; but it’s misguided. What we ALL want is a balanced game. If every hero has a power of 20k or a power of 500k, the game will be the same; does that make sense?

And honestly, you seem to be the only one who has troube with her.

@WalleWu - My apologies there. I unfairly generalized you in with the other two people I mentioned. This quote is what I took to be dismissive, but it wasn’t fair of me to say that it was in reference to min-maxing in your case.

No, what I mean is that we still have a big group of hero’s thould should get a rework, to make those viable in the current meta, didn’t try out the new buffed hero’s though, didn’t had the time

Right I get that and I understand what you’re saying. However, whether every bad hero gets buffed to Gale’s level or if every hero gets nerfed to Fischer’s, the net result is the same - a perfectly balanced game. I was responding specifically to the difference between buffs and nerfs, when in the grand scheme of PvP balance - there isn’t any.

Phalanx is doing good for me. Her team shield is now big enough to save your heroes until the first heal kicks in. So she can replace a quick heal. And with the buffed health plus shield she can withstand Panzers early damage.
She does well in my cover breaker team.

I have a solid phalanx team

Like I said in my “Nerf” thread a couple weeks ago, it isn’t just 1 skill that makes Nightingale OP. It’s the fact that each of her skills is basically the best version of what it sets out to do.

What rubs me the wrong way is that Nightingale continues to get such delicate treatment that all of her nerfs were borderline buffs. In Role Warfare 1 they were supposed to reduce passive healing so that damage would be “stickier” and we saw virtually every passive heal in the game get nerfed, even really weak/bad heals like Kunoichi’s Plat. In that same update they also ignored Mandrake’s gold healing and BUFFED Nightingale’s plat healing. Someone at HHG literally took a look at the best healer in the game, saw a small nerf to her bronze and thought “WOW WE BETTER BUFF HER PLAT OR ELSE PEOPLE MIGHT NOT USE HER AS A HEALER!”

Reducing the stun on her gold and making it not “charge” on missed shots would’ve been fine, but even now with Nightingale continuing to be MANDATORY in draft mode, HHG had to buff her in some other way so that she’s even more dangerous with Plat Caine and/or Moss on the team. I still don’t think HHG understands that you could make Nightingale’s Gold “Each shot has a 15% chance to shoot yourself in the head” and she would still be the best support in the game.

I still don’t get how you can have so much trouble with her, while 95% of the rest of the community doesn’t.

I’m going to have to side with Sougi on this one. Nightingale just dominates every field. Healing? No problem, she has one of, if not, the best active and passive and active heals in the game. Her low power allow her to also dominate in DPS and health. She can have 2-3 more stars and bars than other heroes and still have less power.

The low power is something I can agree on. It makes it easy to min max with her. But if you are playing above 60k power it is more trouble than use that she has such low power.