In what way is this a balanced matchup? 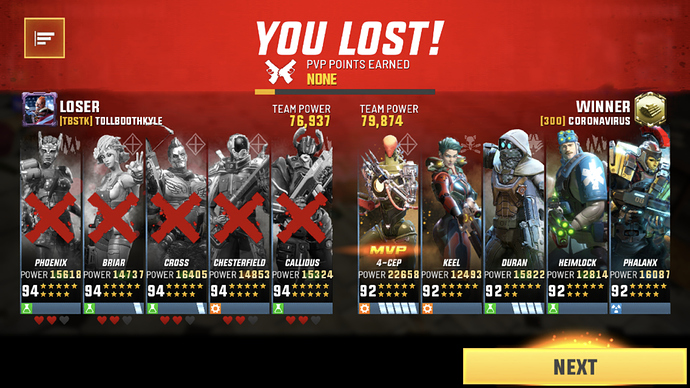 It is actually very balanced. The reason you lost is his team composition is much better then yours. He has DPS, healing, and shield. Your options of hero’s do not compliment each other at all.

I sometimes lose to lvl 95 because of their team makeups and skill. Take a look at your hero’s and make sure you have a good balance and the right kind of hero’s who compliment each other.

Try to improve ur pvps knowledge then,u’ll be eligible for pvps’ complain… I also have tons of pic where my opponents had more than 10k power than my team… But, they lost all those matches due to poor team composition & bad skills… Have a nice day 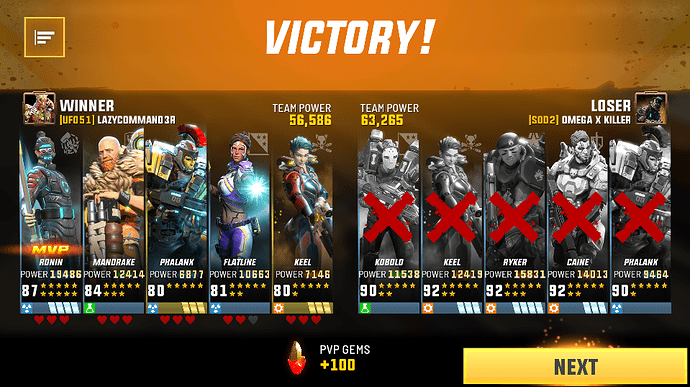 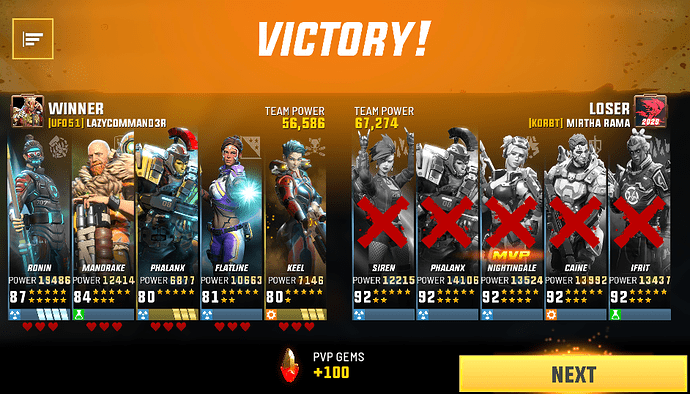 Lol he’s clearly sandbagging with 4cep and Duran I have good pvp knowledge it was just junk thrown together. My power is all even theirs and (the screenshots posted) are sandbagging teams to try and get lower powered match ups

At first, you are very right, secondly for the poster, there have been complaints about it and its not going to change

Even then, its allowed in the game so its not bannable or anything,

But, they lost all those matches due to poor team composition

Lol they didn’t lose because of bad team composition. They lost because you’re sandbagging with Ronin and just like sandbagging in general, no skill is involved.

But yeah @tollboothkyle, people who play with blatant, unbalanced but well-synchronized teams know exactly what they’re doing and who they’re hoping to benefit off of. It doesn’t help that your team is thrown together at random cause in no world does Chester and Phoenix have a shot at 4-Cep, let alone a 4-Cep with nothing but shielders and healers.

@tollboothkyle The original post, which was almost immediately convoluted with sidebars of team composition and …….skill…….is speaking to matchups and the premise that, according to the developers, if you have an evenly powered team you should not get matchups such as what was posted with the 4-cep team. That’s it. I won’t even go into what is posted in the other two pictures…….except to say it’s more evidence that what the developers say about matchmaking is not true.

If you have unbalanced Heroes, you’re more likely to get matched up with other unbalanced teams.

If your team is balanced, you’re MORE LIKELY to get matched with balanced teams.

That doesn’t mean that the above matchup isn’t possible. It’s unfortunate and unlikely, but not impossible.

@Muninn does it matter if you have an unbalanced featured hero? For example, Torque is featured right now and a lot of people will 10 star 4 bar him, but we may have Maven as an example that is not barred. Some of us want to maximize the pvp points gained, but putting them together runs the risk of seeing an equally unbalanced team of say 4cep and healer/shielder.

It will look at your team balance, regardless of them being featured or not.

The reason is that your team doesn’t have solid heals/shields. Briar doesn’t do well when she isn’t piloted, and Callidus doesn’t shine without a support, so having a a balanced power range just wasn’t enough to get the w.

@Muninn I felt it is an excuse totally. To make and create a fair competition environment is HH’s responsibility. Or you can publicly announce the PVP competition is not always fair because the true matched situation is not the same as you said. Players should pray more fair matches because they start to join it. I prefer to meet and lose to super high-power teams and am ashamed to meet the disgusting and opportunistic teams (ex: Max-min or 3-4 heroes).

It’s a sandbaggers paradise, i constantly get matched against opponents with one or two more 10 stars. Not to mentions it the obviously OP ones, like 4Cep or Shivs or Panzer. It’s always the same crap with this non functional matching system. It only goes by the numbers and fails to incentivise usage of gold to revive your heros. It’s absolutely frustrating me to boot that being exploitative in this system does get rewarded while those with EVEN teams get punished.