Hey everyone, sorry for the delay, but I just couldn’t bring myself to make a video about Anvil. He’s just not that good. So instead, I’m jumping ahead and have created a video reviewing the original 5 Patriots Faction heroes and will do a video about Kobold once I have her and have upgraded her.

What do you think about my ratings? What types of pvp teams can you build around Sapphyr, Phalanx or Fortress?

Hope this is helpful and good luck in Patriots month!

@MuthaSuckaz
Another great video and I agree with your ratings, sans the Anvil dig at the beginning. I realize Anvil isn’t in the list of faction heroes you reviewed for obvious reasons, but I would encourage you to revisit him. Mine is 8* plat 1 and he gets mvp in Gorgon almost every match, even out dps’ing Halo, who I pair him with. He’s a top performer in virtually every pve battle. I do run him in pvp from time to time and I think he’s useful but rarely game changing.

If Kobold takes off, which I see alot of potential for that to happen, we may see shield stacking become the new/alternate meta to rez/heal stacking. If that happens, Anvil will be a wrecking ball. Again great job on the review.

Here’s a pic from a few minutes ago to illustrate my point: 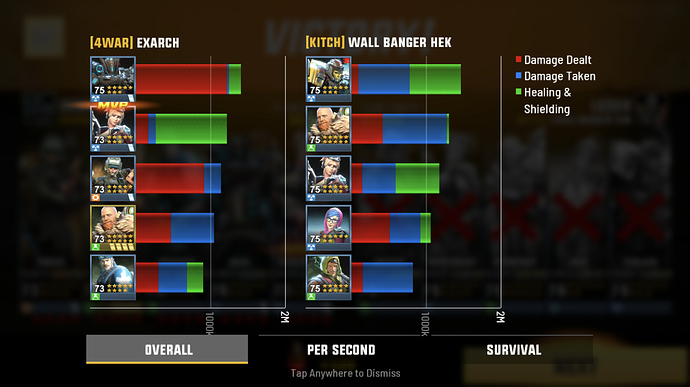 Thanks for the feedback! You’re right that Anvil is a very big damage dealer. I may have written him off too strongly. He may be great if the game shifts, so let’s keep an eye on him. My real issue with him is simply that he dies easier than almost any hero I’ve seen. I was able to keep him alive a bit during the recent PvP blitz. But most of the time he practically vanished to half a panzer clip.

Maybe I’ll reconsider doing a video on him. But I think Kobold will be next!

Cheers and see you in PvP!