Win 1 of the new Heroes coming in the October update!

Guess what the skills could be for this Hero for your chance to WIN!!!

The winners and both new Heroes will be revealed Tuesday, September 25th!! 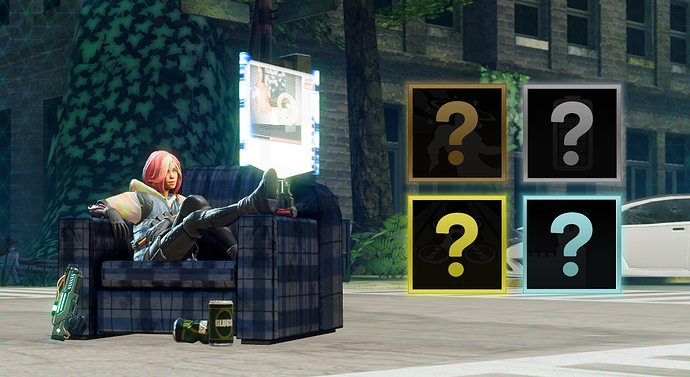 Bronze seems to be some sort of stun, maybe she throws a Tv screen at the enemy and they are forced to watch it for a couple seconds.

Silver looks like Recharge so I’m guessing she will drink some of those Glugs next to the chair to either gain health or buff her stats in some way.

Gold skill makes whatever active drones on the battle field gain the same buffs her silver gives her.

Platinum is she gains additional health or armor based on how many Glugs she drinks.

Does it count if we put our guess in here or only on Facebook?

Energy Character, Probably a Hacker.
Bronze Disable ability
Silver Throws Energy drinks to increase cooldowns of whoever you throw it at
Gold Distracts Enemy team for a certain amount of time
Platinum Gains heals for how many people distracted?

Bronze: some sort of disorient shot. Single enemy.
Silver: looks to be an energy blast that has a charge delay. Or could be a shield recharger. For support
Gold: could call in drone(s) for brief support
Plat: Fortify, so gives team members a damage decrease

Her name is Summer and the protocol is “KEEP SUMMER SAFE”

Bronze: Disabling enemy for short periods time and deal damage after that
Silver: Gain defense and damage buff after drinking
Gold: Summons drone(s) which target all enemies from the start of the mission
Plat: Increase health and armor while take cover

i likes if this hero is bio-chem, because there isn’t drone(s) user in bio-chem atm

She’s so cute I love her already!

She is an Energy hero, no doubt about it. And she likes cats

Anyway as for her skills…

Her Bronze is a Stun.

Her Gold is a drone ability - she gets a free drone (or two) which gives a multi-attack, or heal, or crowd-control ability.

Her Plat passive gives a teamwide defensive buff, probably shields of some sort since she is energy.

“Toastotron 9000”? Not sure whether there is anything significant.

How can you all make such conclusions about the skills when they’re all just question marks and all she does is watching TV? Am I missing something vital?

you can find the clue in the image

I’ll watch it at a bigger screen later.

This new girl looks like a stereotypical “hacker girl,” kind of like Joy from Payday 2 or Dokkaebi from Rainbow Six: Siege. That said, here are my thoughts…

Killjoy, Expert Hacker. Utilizes an array of disabling gadgets to greatly debuff the enemy and their automated units.

Her basic attacks would be paltry, and she would have to rely on her team to protect her long enough so that she can deploy her comparatively stronger Active and Passive skills.

I would also believe that one of her main “gimmicks” is that if she is left to be controlled as an A.I., she will continue to target Invisible Heroes as if their were still visible.

Bronze Skill: White Hat - targets one automated unit (drones, holograms, sentry turret, etc.) on the enemy side and disables it for 5 seconds. An automated unit disabled by [White Hat] can violently explode upon being destroyed prematurely, dealing massive Normal and Energy damage in a wide area.

If there are no automated units, [White Hat] will instead target an enemy directly, dealing medium Energy damage and Disorienting the enemy for 5 seconds.

Silver Skill: Black Hat - targets one automated unit (drones, holograms, sentry turret, etc.) on the enemy side and rewrites its directives to fight for this Hero. An automated unit rewritten by [Black Hat] receives an overheal equal to its base health on top of its remaining health, and will damage its former allies equal to 125% of its base damage. [Black Hat] lasts for 6 seconds.

If there are no automated units, [Black Hat] will instead target a piece of cover directly, dealing 5% durability damage instantly and causes that cover to deal minor Energy damage-over-time and to Mark any enemies behind it. Marked enemies have their Normal and Elemental armor reduced by a minor amount. This will also last for 6 seconds.

Whenever this Hero directly hits and enemy with either [White Hat] or [Black Hat], the enemy will also receive minor Energy damage-over-time.

Can I win please? Or just roast me. Whichever one.

Gold ability looks like a drone and silver is
healing

what s the contest ?

The girl is definitely of Energy element. Wound’t be surprised is she’s related to Oracle but I also don’t think she’s in the UAF. I think she’s with The Watch and is one of Halo’s friends.
She’ll be a support character more than a damage-dealer.

I kind of think that screen will come in handy. What can a screen do? It can:

While the screen is active more than a few seconds without being interrupted she will pop open a cold Glugs soda for restoring some health (Platinum). Maybe she’ll pass it around so that all her team will have a slurp.

Her Silver is definitely a stun as several other already pointed out.

I think that:j
Bronze: she may use the device she’s using for tv to stun an enemy, by throwing it and projecting something… or whatever.
Silver: cloaks herself with the device and gains a buff…who know
Gold: while cloaked she may gains atk boost or health??
Platinum: something to boost her like more hp and Crit something like that

Bronze: Disorients the enemy for few secinds.
Silver: Charges damage up and hits the enemys after after a period of time similar to fortress silver skill.
Gold: Calls a Support Drone to attack enemys.
Platinum: More Health at the beginning of a fight.