Aah I still remember the good times in the barracks.
Ghost was the taciturn one, always serious, never smiled always grungy, crazy boring.
I was the rebel, always happy and vocal, I admit I was a pain in the arse if you didn’t know me well. wow. you have no idea eheh.
We were always getting into some kind of trouble, always fighting with the sergeant. Good man but stubborn as a mule.
Then we split up, he goes to the sniper course thing and me as a machine gunner, my heaven.
Not to take away from the other weapons, yeah sure a rocket launcher is nice… but a machine gun, man, the best weapons ever created. i love them.

Sand Trench
builds a trench in her position.
The trench allows the hero to shoot from a more protected position, reducing the chance of being hit by enemy bullets by 40%.

Stationary Machinegun
mounts the tripod and places the machine gun on the ground dramatically increasing the accuracy of the shot and obtaining infinite firepower.

Larger Magazines
increases the ammo capacity of all allies as long as the hero is alive.
+30 for light machine guns; (start) +10 for assault and carbine; (50) +5 for pistols and marksmen; (75) +3 for specials, shotguns and snipers. (100)

Appearance:
is a short, stocky woman Scottish with slightly tan skin and long burgundy/brown hair with a braid on the left side.
She is wearing a light-colored desert camouflage jumpsuit with turned-up jacket sleeves, a light-brown bulletproof vest, long pants, and light-colored boots.
She wears a dark gray helmet with its visor up covering her head and black fingerless tactical gloves.

Her Weapon: Mini Lad
is the brainchild of Warmole, a big, old-fashioned-looking machine gun.
Characteristically it is a mixture of many weapons, the water tank contains a coolant mixture, a handle over in container to carry the weapon.
It has a medium/high rate, it is not very useful when not mounted since the huge recoil makes the weapon uncontrollable even shooting in bursts and in long distances it is horrible.
it has little ammunition, medium damage and very high reloading speed 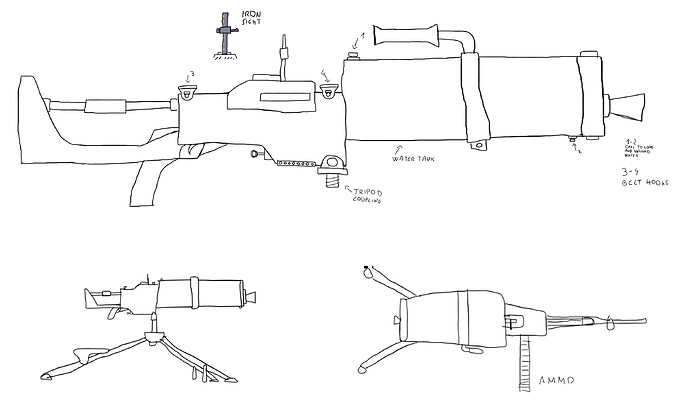 all icons are taken from around the forum