AHAHAHA MOOOOOO
A 4-door wardrobe padded with nanomachines and reinforced by a war proto-suit with horns?
KLG engineers like to exaggerate

Silver: Berserker - It rages by increasing weapon damage and armor, but suffers slight damage over time and decreases weapon accuracy.

Gold: Smashing Armors - the bullets from the weapon ignore 10% of the enemy’s armour.

Platinum: Nanomachines - every time he suffers a critical hit, he regenerates some health. 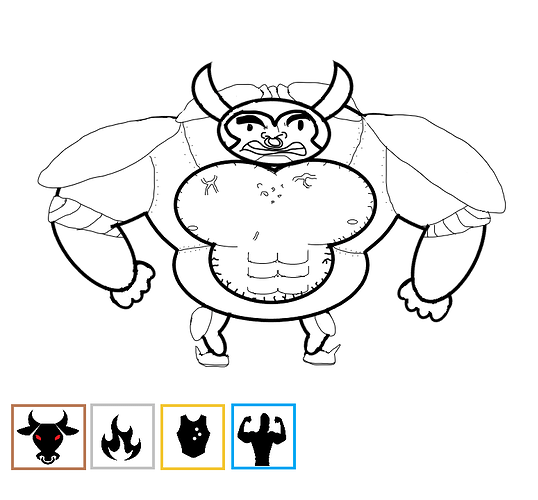 The Weapon: “You are Lucky that we are Divided by two Barriers” shortened to “YLDB”
are a pair of mini cannons located on the arms
(high damage, slow recharging, medium fire rate) 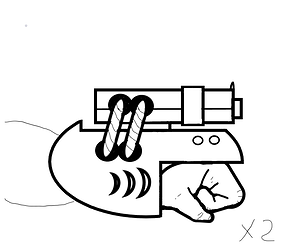 A bit of Backstory:

In the weapons lab at the not-so-secret S.W.A.T. base.

Truck: So, what do we have here?
Buster: eheh you like it? We found it during the raid
Bunker: we didn’t have time to try it, when the ospray arrived we got up in the race.
Truck: hmm… let’s see… hey you, inside the suit… can you hear me?
Soldier: …
Bunker: he seems to be sleeping… with his eyes open
Buster: …disturbing…how do you sleep with your eyes open?
Bunker: He’s not sleeping… it’s like he’s waiting, hmm…
Truck: waiting for us to reprogram the suit, it will take some time, maybe a week
Blaze: or… just press the reset button
Truck: Uhh? oh hello Blaze, hmmm it would be too easy to press that button if there was and even if there was not know where it is.
Blaze: in the ass
Truck: ahah very funny, B we are talking about serious things
Blaze: I’m serious, there’s a red button in the ass.
Truck: yes, as if not… as if elite engineers from the strongest organization in the world were thinking of something like that…
Bunker: he’s right, there’s a button
Truck: …
Buster: What do you want from the “elite engineers” who built 4 huge robots in the shape of a dragon?

Truck presses the famous button and that thing starts to move.
takes one step, then another and then falls face to face to the ground.
he gets up after a while and acts as if nothing had happened.

Soldier: Awww, what happened?
Bunker: so many things I don’t want to explain… how do you feel, soldier?
Soldier: fine, fine… I feel full of energy, as if I could lift a car.
Truck: according to the analysis you could lift a 300-ton vehicle.
Soldier: Really?
Truck: no, I was exaggerating… but we can always try, in the meantime enter the test field and let’s do some tests.

The soldier enters the field while Truck starts a series of tests of extreme resistance.
After 6 hours the tests are all over.

Truck: then… fire resistance done, acid done, electricity done, shock done, high pressures done, zero-g done, water done, grandmother’s lunch done and Beautiful’s marathon done… magnificent you are a real death machine.
Soldier: great… so… now that I do.
Truck: unless you want to finish the remaining 5000 episodes of Beautiful, you have nothing more to do.
Soldier: …
Truck: Well what are you still doing here? Go outside, socialize, look for a girl, I still have to stay here to finish a couple of things.
Soldier: oh… okay then I’m going eh…
Truck: ah wait a minute… I have to register you with the new name, you are no longer a simple soldier… what do you want to call yourself from now on?
Soldier: hmm… what about Toro?
Truck: really? A more imaginative name, right? … okay.

Truck records the new name of the soldier in the database of the base
Truck: Welcome Toro… and good stay
Toro: Good makes an incredibly disturbing smile
Truck: Never make that face again or I will beat you to death
Toro: Okay, sorry.

When I read the title I envisioned a cow from Diablo. I basically envisioned Ronin…except a cow.