damage and reducing the armor by X% as long as it is under fire.

jet-fighter512×512 9.13 KB
Dogfight
frees itself in the air by flying autonomously across the field for 12sec, increasing its agility by 10%.

dodging512×512 10.7 KB
Evasive Maneuvers
while in the air, increases dexterity and damage evasion probability by 70%.

extra damage against enemies with [Target] or [Provocation] active

air-force512×512 3.65 KB
Ace of Sky
A good pilot must know everything about their aircraft and have an ace in the sleeve for every eventuality.
While in the air, this hero obtain x3 base damage and immunity to most status effects.

Appearance:
Is a tight-fitting suit similar to latex.
it is almost naked in the sense that it lacks armor except at the chest.
It is entirely black and the decorations are in KLG colors. 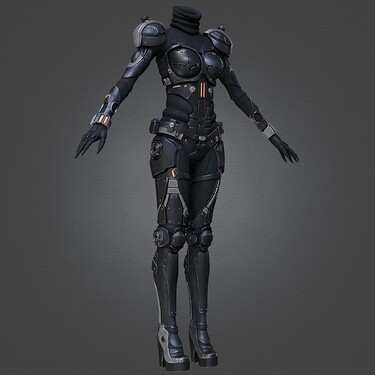 Think Striker but with armor only in the chest, this is to give aerodynamics and lightness… don’t think wrong

Their Weapon: sLMG Viper
the “s” stands for small
Is the basic weapon of all klg troops.
the Viper has LMG set but is smaller, has a high rate of fire and a 30-round magazine.
It fires tracer bullets of smaller caliber than normal.

all icons are taken from around the forum and 4122 free SVG and PNG icons for your games or apps | Game-icons.net
images taken from roman3dd Modelli di 3D | TurboSquid

Always nice to see a concept from you Lappo.