I won’t let you down… not now at least

Heavy Support - Protector/Defender - Tank - Riot Control
A massive semi-autonomous robot to control the masses in revolt, heavily armored and equipped with two riot guns.
He uses his skills to disperse the crowd and make them harmless for long periods of time.

Bronze: Foam immobilizer - the hero shoots a foam that solidifies on contact with the air and locks all enemies in place for 30 seconds.
Enemies will still be able to shoot, but will not be able to use skills.

Silver: Secure Perimeter - activate a security perimeter around the Allied camp for 20 seconds.
Each time an enemy activates a skill, the hero will fire a smoke grenade at the affected ally protecting him from incoming damage.

Gold: Protect The Weakest - the hero loads a shield for himself at the start of each round and every time an ally falls below 30% health, the hero gives 25% of his shield to that ally.

Platino: Guardian - as long as the hero is above 40% health, reduces the damage suffered by the team.
From 30% down, he gets armor boosts.

Appearance:it is a big, heavily armored robot, almost completely black, it has dark blue arms with yellow bands, on the chest it has written “police” always in yellow, the foam tank is red and is connected to the arms by two resistant rubber tubes
It is equipped with 4 long distance grenade launchers, has 2 cannons on the palms of the hands and another 2 retractable on the arms to shoot the foam.
instead of legs, it has a big truck wheel 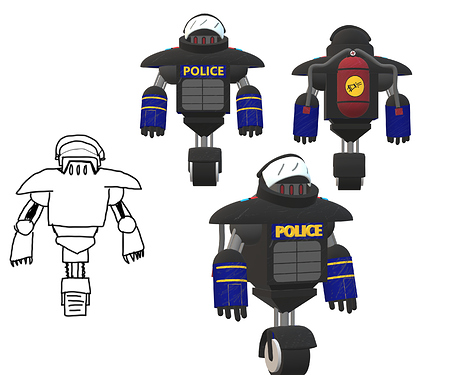 if you think it’s a bad draw, try drawing in 3d with Paint 3d and with a computer that looks like an engine of a Boeing 747 how much noise it makes

A bit of Backstory: it is the flagship of the riot defense forces, there are various versions between military and civilian.
Mostly it is remotely controlled, but in case of need it is equipped with an autonomous A.I. and a solar battery that can last a maximum of 3 days.
The choice of the wheel instead of the legs in the beginning was to save on the budget but later it was seen that it was more effective, faster and made less noise.
during the DZ all Riots and other military versions were deployed in battle but were exterminated by enemy acid grenades.
Only the designs of the first prototype survived.
They only managed to rebuild one because of the lack of material, it was modified and updated but its original goal remains the same.

His Weapons:
The MC semi automatic Pistol, are two pistols mounted on the palms of the hands with a very low rate and low damage, but very high accuracy and reload speed. 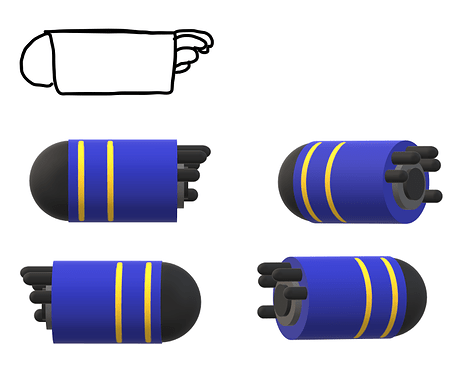 in itself is very similar to Fortress guns, but instead of bursting it’s semi-automatic.