こんにちは私の名前は凛凛です、はじめまして
I will be completely honest with you, I don’t care how the war goes, as long as I am with my uncle I am happy.
Every day we play and have fun, even when uncle is a little angry, he always manages to bring out a smile for me.

Flail Rain
slams the target and everything arounds it two times with her massive energetic flails dealing enormous damage.

Butter Press
Squash the target dealing an insane damage stunning it for 8sec and destroying they armor and reducing it it at 50% for the rest of the game.

Dokidoki
when this hero recieve health, she increase the damage of her weapons for the entire duration of the heal

Gyroscopic Accelerator
Skills can now being charged before use for increasing even more their final damage and adding more crowd controll effects.

Appearance:
She is apparently a girl of about 13-15 years old, but in reality she is 34.
Her body’s block growth is due to a growth hormone deficiency, while the psychological block is due to the Peter Pan syndrome and an obscure trauma, which gives her childish attitudes and categorically refuses to enter the “adult world” but ironically and hypocritically she has nevertheless entered the war.
She is very short in stature, her skin color is a very light pink, her hair is light brown double buns, her eyes are almost always closed and her teeth are strangely pointed.
She wears a red sleeveless Chinese dress slightly shorter on the skirt with gold embroidered designs, a pair of black tight-fitting trousers and slip-on loafers.
She has also an alternative look that changes her hair color to raven black with two ponytails, the dress is longer while the colors change to white and blue decorations, silver black pants and loafers

Her Weapons: Rolling Stones
Are a pair of miniature pump-action shotguns that can transform into two flails.
have low damage and rate of fire, but virtually unlimited ammo with semi-automatic fire 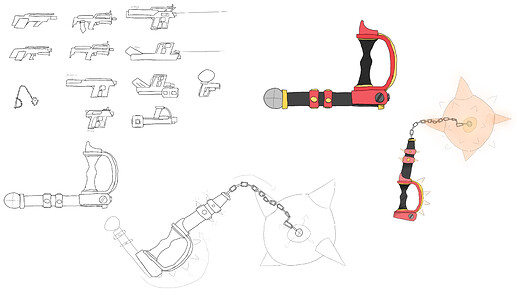 All icons are taken from around the forum

That’s an interesting character, I like it. What would her hitbox size be in comparison to other heroes?