Tank - Support - Controller - Juggler - Child’s toy
An old-fashioned robot designed to entertain children.
It was withdrawn from the market after a unit destroyed half the city.

Bronze: Cuddly Bomb - fires a heart-shaped energy bomb that explodes on contact with the target generating a nova that expands into all the enemy camp amaliating the target and those around him for 20sec.

Silver: Collective Hug - the hero spreads his arms covering the entire enemy camp and then closes them again, trapping the first enemy he encounters.
The trapped enemy will be lifted up into the air and crushed, suffering damage over time.

Gold: It’s not Lemonade - when the cupola on the hero’s head is damaged, it will release a liquid that will attack the enemy who is attacking it.
This liquid will increase the hero’s damage against that enemy.

Platinum: Battery Compartment - now the cupola on the hero’s head acts as an extra shield protecting it from enemy attacks up to X damage.
When the dome is destroyed, [It’s Not Lemonade] liquid is spread throughout the enemy camp, increasing the hero’s damage by 500%, but leaving the head totally exposed.

Appearance: is a short robot with a roundish body, long arms and short, platinum-grey legs.
The head is very narrow and squat, covered by a somewhat larger resistant glass dome with yellowish coolant inside. 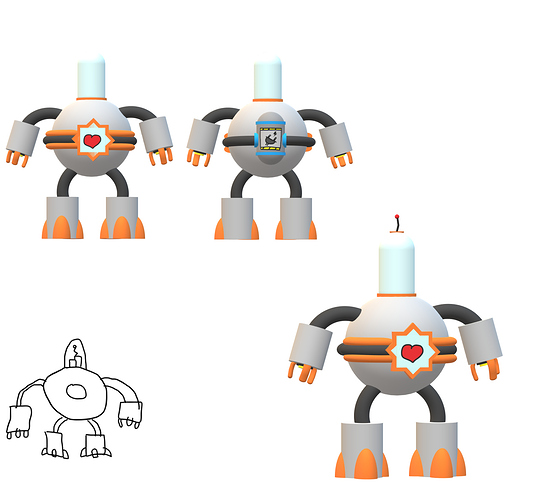 His Weapons: The “Finger Guns”’ are his own fingers.
They have a very high rate of fire, accurate and are fast in reloading, but they have little ammunition and have a low damage.
Class: LMG
shooting rate : 10.2
ammunition capacity : 30 (15 per gun)
recharge time : 0.8 sec
damage : Very Low 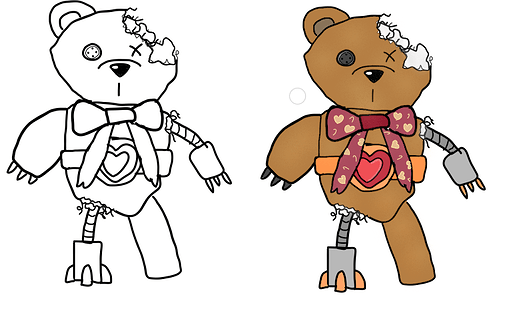 Platinum: Infinite love - the hero constantly charges small shields that he shares them with the team throughout the match.

Dear primus, it’s both disturbing and adorable. You have created the ultimate killing machine.