“Your journey has been a long one coming. Some don’t have that opportunity. I’ll be your guide in this world and the next in the city of the dead”

Name: Mictlán
Occupation: Aztec deity
Weapon: Uzi (idk. Work in progress but it’s the first that popped on my head for now)

Appearance: so for this, i thought of having either a painted skull on the face or be closer to how he’s depicted with an actual skull. In my head, it’s close to how the Iron Maiden mascot (eddie) looks like. He’s rather pale, a bit of jewelry around the neck and a headband (not too flashy). a slim figure, but don’t let that underestimate his power. I want to try and sketch the idea later.

Skills:
Bronze: Poison Dart (shoots 3 consecutive darts at an enemy causing DoT for a short period)
Silver: Macuahuitl* strike (strikes with the weapon. Does extra damage to shielded enemies. Has a chance to break the shield)
Gold: March of Doom (increases the damage from poison darts. Has a chance to cause slow or disoriented)
Plat: Spirit guide (this hero recovers health when defeating an enemy with the poison darts)
Ruby: insert ruby skill 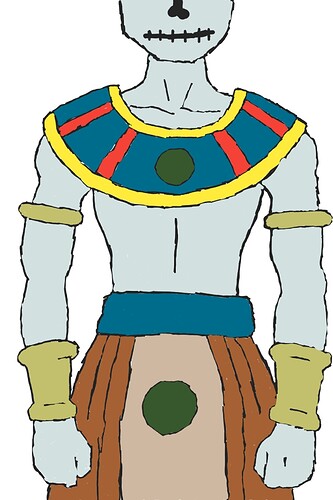