Heavy Support - Glass Armor - long recharge times, but powerful skills.
A veteran of many wars, master strategist and expert in indirect combat.
Supports his team by continuously supplying them and calling in the attack of a heavily armed VTOL

Bronze: Supplies - Launch a flare near an ally, after 2 sec. lands a crate in the illuminated area.
The crate will heal, reload ammunition, and reload allied skills faster, but will reduce its health in the process.

Silver: Big Brother - recalls the attack of a VTOL that will bomb all enemies, albeit very imprecisely.
The VTOL will remain in the field for 15sec.

Gold: Laser Marker - Thanks to the laser pointer of his weapon, the hero is able to mark enemies by allowing the VTOL to shoot at only one target at a time.

Platinum: Morphine Injection: when he falls below 30% health, the hero injects himself with morphine curing every malus, regenerating health over time, increasing speed and reducing weapon reboot time for 7sec.

Appearance: Is a man in his 40s, tall, athletic, slightly dark skin, bearded and very hairy, and his right arm is replaced by an old bionic prosthesis.
Wear a red bandana covering the forehead, a greyish T-shirt, a military green vest, dark trousers, military amphibians and fingerless gloves. 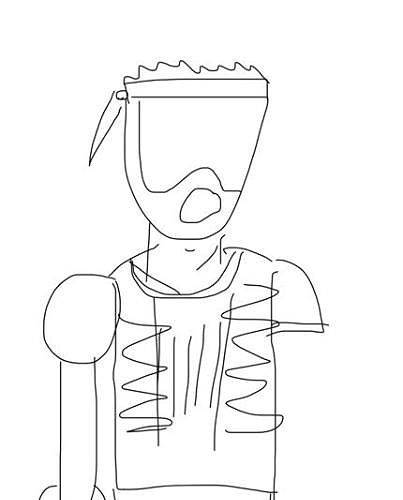 Yes, I drew it from the phone.

His Weapon: The Assaultor, it’s a very accurate, high rate, but not very powerful assault rifle.
It fires a 4-shot burst

I really like his Gold Ability, it’s seems pretty useful, and isn’t OP. I really like the idea! Kinda reminds me of a mixture of Colonial Wesson + Dogface. As usual, good job!