“So, you want to know how to beat those posers? Simple; put on a stunning, visual performance!
Oh, but they won’t care about you, they shouldn’t. You’ll be gunning them down them down as they gape at your fake, harmless friends…and that, darlin’, is where I come in.” 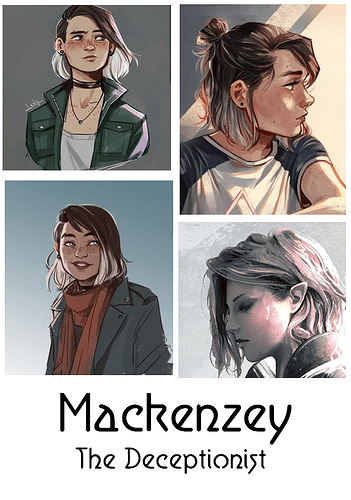 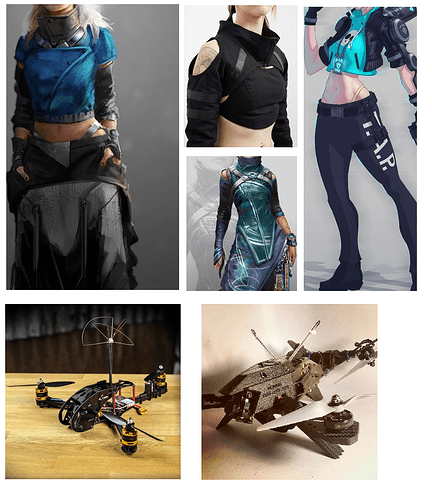 Mackenzey, for her brilliant and artistic skills, has learned the benefits of staying out of the limelight. Born to two hasty and restless parents, she and her family found themselves driven into the Morlock sewers, hiding from the brutality of the War above.

As the harsh, brutalistic, and fearful years passed by, Mackenzey found ways to keep herself entertained, often using smoke and light to build some remarkable figures and stage-sets. Being able to vanish into nothingness was very effective, especially during KLG and Morlock raids.

Years later, an independent, 18-year old Mackenzey yearned for change. Her restlessness, much like her parents, urged her to take action and move to the surface. Over the course of the next 4 years, she would master her talents, discover supplies and technology, and disarm threats with her charm and prose. She would eventually land in the company of some very eccentric Watchmen, people who she’s come to trust.

Now, as “The Deceptionist,” she assists her friends in the same way she assisted her family; providing an invisible haven. Yet, she can’t help but think about her true self, to pull off the mask and reveal the horrors she endured in the sewers. Until that time comes, remember this:

Bronze – Projection – This hero replicates a targeted ally, creating two identical illusions. Each projection has x health and deals x damage per second, although they cannot perform skills. Each projection lasts for 25 seconds or until they are eliminated. [Projection] starts the mission at 40% charge.

If an ally receives a new [Projection], any previous [Projections] for that hero are eliminated.

Silver – Reactive Decoy – Constructs a stationary, volatile hologram which (after 3 seconds) activates to deal x damage per second. If it is damaged, the hologram is destroyed, dealing x damage to 3 nearby enemies. All 3 enemies are stunned for 4 seconds.

Gold – Diversion Strategy –This hero begins the mission with Invisibility and three projections of herself. Each projection has 15% of this hero’s total health, and deals x damage per second. Once all projections are eliminated, the Invisibility effect ends, revealing her location.

Platinum – Mind Games – This hero and her allies have a 15% chance to evade enemy attacks.

For each spawned entity, each ally gains x damage per second.

Hi Guys! Glad to be back for this one, couldn’t stay away. Not sure when the next one might come out, as I’m still very busy, but I have a list of ideas ready to produce. I personally was thinking of Apex Legend’s Mirage and Mysterio as loose inspiration for this one!

If you liked it, please leave a like and a comment! It means a lot to me, thanks!

So basically a female version of halloway and hivemind combined lol.

Eyyy Nyris is back posting heros

Bronze and gold are epic. This is masterful lol

Thanks! Made a minor change to her gold to tame her damage a bit. Also, as I’m prone to do, I changed the song for a more fitting one.

(further edit: made some adjustments to her bronze to allow more flexibility with projection placement. Also, her faction changed from the Patriots to the Watch to more suit her risky personality.

One more addition is that I wouldn’t mind naming this hero “Showtime”, but since Ifrit already has a skill with that name (and similarities with other “Sh-“ named heroes, I decided for something different).