Decibel: I VAN VYO VO VISE VO VAN VAN VVAN VANTYYYY
Random Girl: ITS SO LOUD I CANT HEAR MY OWN THOUGHTS
Random Guy: YO, WHAT TIME IS IT?
Random Girl: ME TOO
Decibel: VOOOOOOOOOOO

Melody Change
Changes music genre each time the skill is activated.
Each melody changes the weapon’s attack type and effects [30 beats per minute].

resonance silver ver.512×504 9.43 KB
30 Beats Per Second
generates different sound waves, which can have different effects depending on the melody being used.
Nightcore - generates more shockwaves and causes damage to enemies.
Hardcore - generates waves that destabilise the enemy.
Daycore - heals allies and increases their perception.

sonic-boom plat ver.512×512 11.7 KB
Drop the Beat
when this hero isn’t under fire, he constantly accumulates energy at a rate of 1% every 0.5sec.
When the counter is at maximum, it will release a violent sound explosion that has a 50% chance of stunning or causing

damage to all heroes on the field.

Appearance:
he is a boy of medium height, has bright brown hair and is thin.
He has a speech impediment that causes him to add a ‘V’ every time he speaks.
He wears simple clothes, a long T-shirt, jacket, cargo trousers and running shoes, a hat with the visor on backwards, a pair of barred party glasses and a pair of headphones on his neck; all coloured in very bright primary colours.

His Weapon: Flying Piano Mod. PTTEOT (party till the end of time)
it is a flying DJ station modified by decibel himself with extra speakers, keypad, soundboard, subbufer, stereo system, adapters, amplifiers, keyboard piano, several mircrophones almost always broken, other things I can’t remember what they are called and a Karaoke. 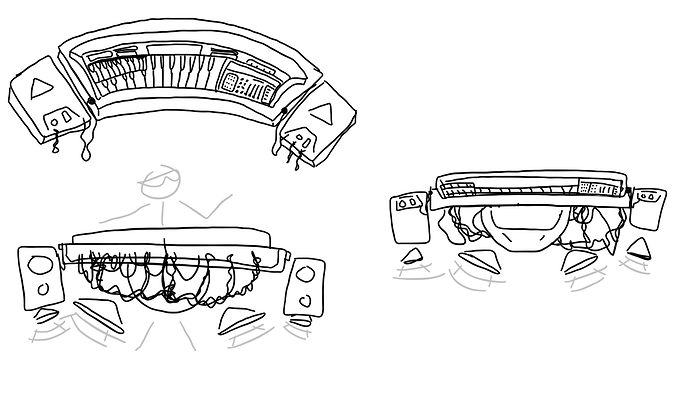 All icons are taken from around the forum and https://game-icons.net/

The battlefield about to turn into the disco floor with this man.

Would be lovely to have someone who blasts core music in my ears while i’m slaughtering in pvp.
He said with a grin

He going to do collab with Siren