AAAAAAAAAAAAAAAAAAAAH
Suicide - Dps
A crash test robot with a few gears out of place, he deliberately explodes to cause maximum damage.

Bronze: Damage Testing - boosts the weapon with infinite ammo, explosive rounds and increased rate of fire, but reduces accuracy by 20%, and health by 50% for 12 seconds.

Silver: Self-destruct - activates a 5-second counter.
At 0, the hero throws himself into the enemy field causing a massive explosion that hits and destroys everything.

Gold: Approved Test - every time the hero finishes using a skill surviving it, he gets a “Success” charge.
Each charge allows the hero to recover x health per second until the end of the game 5 times.

Platinum: Another One - When the hero dies at his or the enemy’s hand, he has a 50% chance of being replaced by another robot up to 5 times.

Appearance:
is a tall and very “slender” robot with almost no armor, it is completely yellow with black details and with verges and dents, burns and holes all over the body 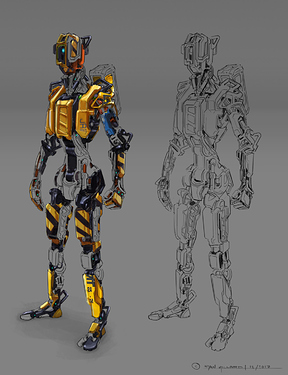 His weapon:
The “UWUWUHM GYUIFRIFUIF TERUTUOYUF TIF” or “Osas” is a prototype of Bullpup assault rifle with 3-shot burst (automatic with Damage testing).
Very precise and the fire of the burst is very fast, but is weak on damage and slow as between a burst and the other 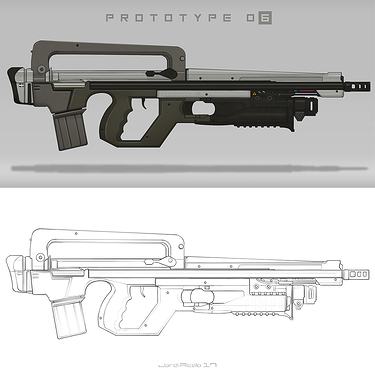 A bit of Backstory:
Made somewhere in China, it was a Crash Test robot used in the mega arms industries of Central America.
Before its factory was closed down and then destroyed during the Day Zero raids, its task was to test high explosives smart bullets.
He wasn’t the one shooting, he was the target.
He basically had to run so he wouldn’t get hit… most of the time he failed.
After months or maybe years, he reactivated himself inside a dusty crater.
He repaired himself with the parts of old destroyed robots , took one of the few weapons that survived the bandits’ raids and set out on a journey.
Where? It’s not known.
What interests him is to find a quiet place to spend his eternal retirement … or explode somewhere, he still has not decided

So will there b 2 heroes next month?

Hey Michael,
Check out the October patch notes when those show up to see what is being released!

Thank you but those aren’t my artwork, you can see the difference between those taken on the Internet and my drawings (they are very ugly).
And he’s not part of the KLG.

Pretty cool. I like the way you listed everything. Your ideas are nice. You should consistently continue to put more hero ideas out.

No posting on months old posts, Munnin does not approve

is exactly what I’ve been doing for about a year.
no one considers me, but since I’m Italian I don’t care and post anyway

No need another robot, we already have an ugly robot last month lol.