I created this robot over 80 years ago.
I can lift immeasurable weights and withstand the immense power of Mother Nature.
But even today, at 164 years old, I still can’t open the damn pickle jars…

Big maintenance robot with I.A fused with the mind of its creator.
Uses powerful electrical abilities that constantly destabilize enemies.
And for some unknown reason, it also serves as a toaster

Bronze: Ion Bomb - Shoot an electric sphere that strikes with lightning and stuns for 1sec all enemies on its righteous and slow course.
The sphere explodes on contact with an enemy or cover generating an electric wave that silences the enemy’s active and passive skills for 5sec.

Silver: Negative Charge Arc - Shoot a continuous arc at the nearest enemy for 9sec that can also chain itself with other enemies.
The target remains stunned all the time and skill energies will be consumed slowly over time.

Gold: Lightning Doesn’t Strike Twice - 50% of the bullets fired that miss the target can explode generating electric arches that hit the nearest enemy.
Lightning can stun for 0.5 sec or do X damage.

Platinum: Electrostatic Nausea - as long as the hero is alive, all enemies will suffer slight but constant damage until the end of the game.
When he dies, the damage will increase more and more for 8sec and then disappear.

Appearance: is a big blue and black robot in the shape of a ball with huge arms and tiny legs. 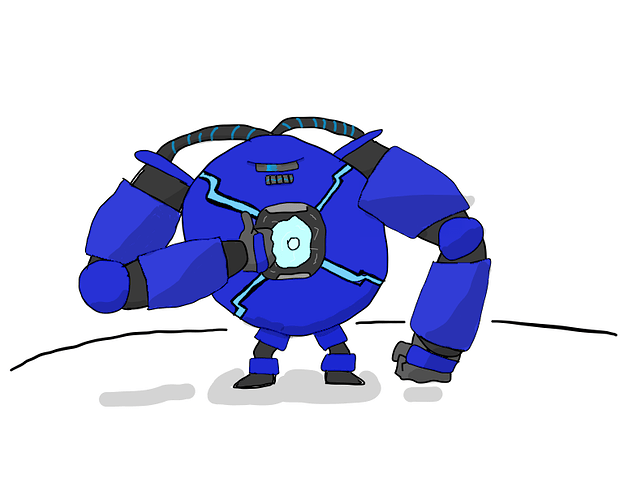 His Weapon: The Odin Lance is a modified spear capable of firing a huge amount of small electric bullets with an absurd rate, but its spread is very wide and the damage is very low.
LMG class.

Combat robot who serves as a toaster? Just make one who can make omelettes and we can open a breakfast place with galante.

Don’t give me strange ideas