Pilot: I built this robot from scratch, starting with my uncle’s old blueprints.
Maybe I got the measurements wrong because it looks smaller than it should be.
If my uncle would see it now, I don’t know if he’d be crazy happy or if he’d want to kill me.

Artillery Mecha - Tank - Support - Sustained Damage - Shielder
Mobilized artillery in compact dimensions
Adaptable to any role, can destroy and protect at the same time.
And thanks to its double 4-barrelled canons, even enemies behind a concrete bunker can’t escape it.

Gold: Excessive Manoeuvres - at the start of the game, the mech has a 50% chance to charge forward and overwhelm all enemies in its trajectory or shoot crazily hitting all enemies.

Platinum: Universal Barrier - when all Allies will have a shield, these will be cancelled and a huge barrier will be created that will encompass the entire Allied camp.

Appearance: is a medium-sized mecha. (almost like Galante but a little taller)
is all squatted, arms and legs short and without an actual head.
it’s all blue/metallic grey, with details in black

The Pilot, is a young Hawaiian girl with long, black, curly hair and dark skin.
She wears simple mechanic’s clothes, a striped T-shirt, a blue overalls and yellow work shoes. 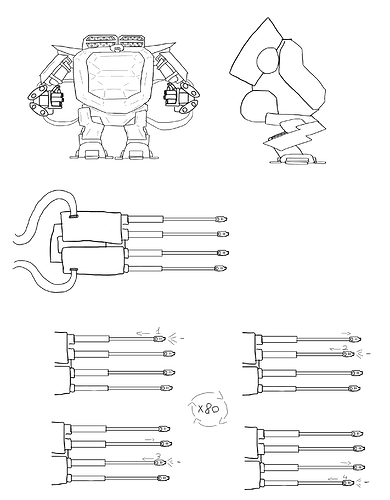 His Weapons: “definitely not stolen from a military helicopter” or “DNSFaMH” are a pair of 30mm double automatic cannons.
They have a high rate of fire, sustained damage, a lot of ammunition and more or less good accuracy.
This weapons has the only flaw that when it shoot in full auto, it overheats and takes longer to recharge.

Nice, a mecha character. Those are always fun in games.