I would like to hear your opinions about my squad. I started playing last month and playing very actively. I can be classified as F2P player so generally don’t buy gold, just save them from missions etc. So here is my squad: 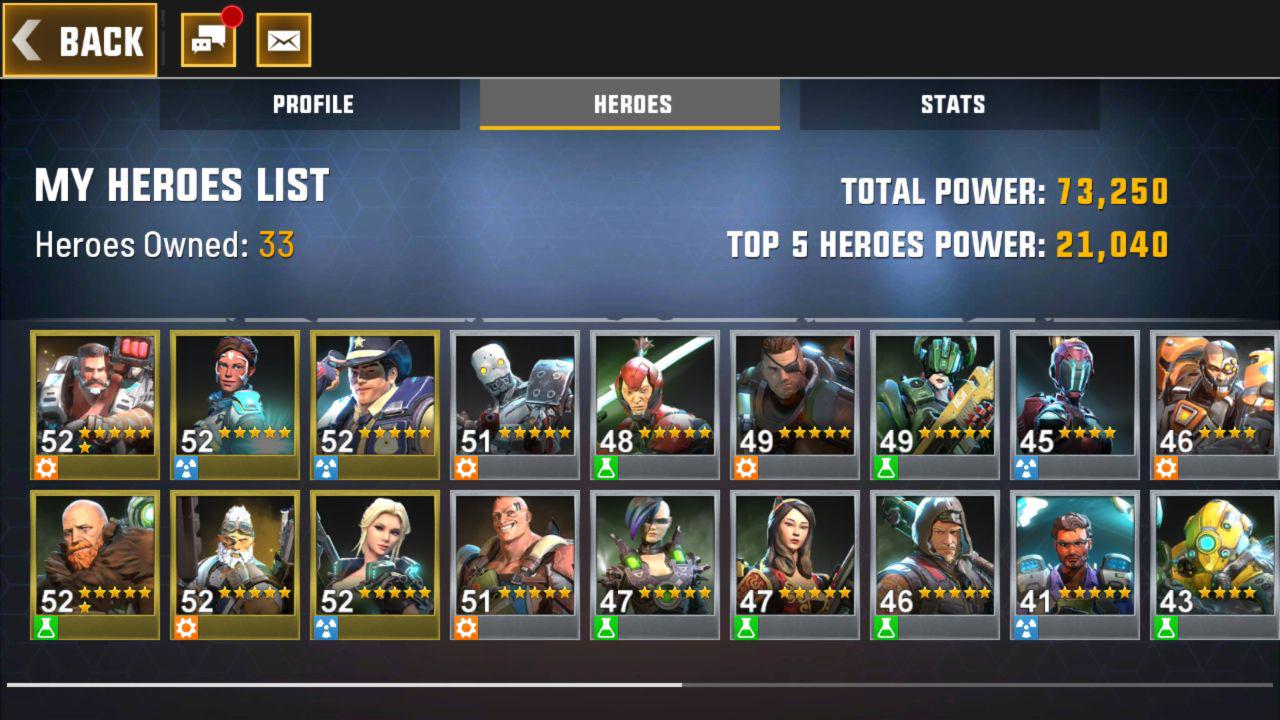 My primary PVP squad is Dogface, flatline, mandrake, nightingale, matador. Then if any of them is out of lives, gammond. I got them to Gold skills but now stuck because don’t know what to do next. Should I get any of them to plat (which will take really long time) or should I invest on any other lower star heroes that I have? (Hardscope, keel etc.) And which heroes I should avoid to allocate resources (kunoichi, castellan etc).

I appreciate your time and help on this.

And this is the rest of my squad: 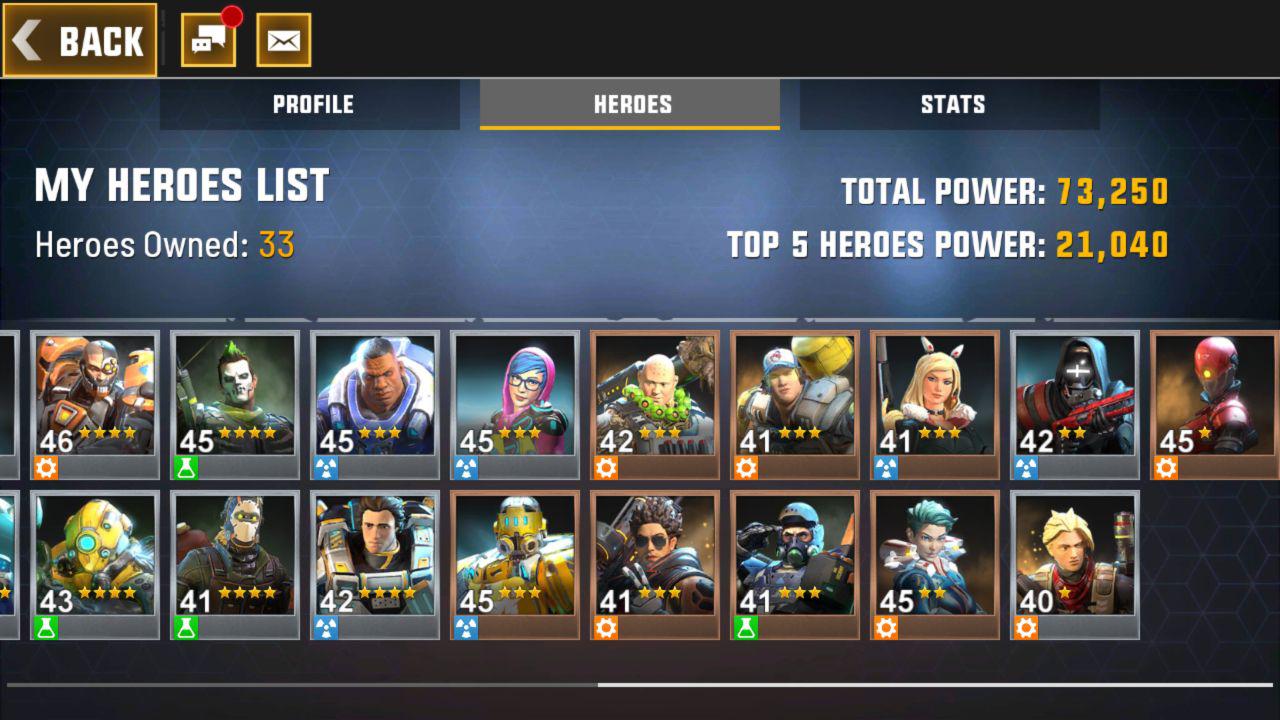 Hello there.
Regarding your questions:

1-) Consider dropping out Matador from your pvp squad. He’s no good, trust me on this. You can place Razorback for tank. Definitely make him gold. When u need more dps, Odachi, Maven and Clyde are great options. You can make them gold too. Cinder would be nice choice too for dps once these heroes are exhausted.

2-) Make Butter Gold. With current meta, he’s a great support unit. When u lose Razorback, you can place him when u need more support/shield. (or if enemies have lots of burst dps)

3-) Keel is a great healer, make her gold and when u lose a healer you can place her to fill spot.

5-) Farmable heroes such as Dogface, Mandrake, Nightingale, Flatline, Keel, Clyde, Maven etc. should be your priority. But dont be so quick on levelling or platting them as it would bring power cost. Your enemies in pvp will be stronger as a result. When u are above level 55 go for platting, but again no need to be very quick.

Last note: Gammond was nerfed to the bottom recently, he is not that good. But when u need a tankish healer bring him in. He does what he can.

Thank you very much for your detailed reply.

3.Yeah even though she only has 2 stars, works very well. So I can work on her.

EDIT: And on which crates should I invest my gold? Like ifrit, wessel or any other possible heroes?

1-) Consider dropping out Matador from your pvp squad. He’s no good, trust me on this.

I’d disagree. At 21k power he is a legitimate healer. Shouldn’t have promoted him to gold though, his gold is kinda useless. Paired with Flatline and Night, your team is fine and I am sure you have your fair share of wins.

At higher levels (probably high 20ks and above 30k) Matador has limited usefulness and probably there might be better heroes with an overall better package than Matador but even then I wouldn’t count him as useless.

You can place Razorback for tank. Definitely make him gold.

Agree that you can replace Matador with Razorback but I would not promote him to gold.

3-) Keel is a great healer, make her gold and when u lose a healer you can place her to fill spot.

Nope not really. Keel needs stars, not gold. Keel’s gold has been reconfigured and it is difficult to profit from it in a consistent and winning way. Her value to the team now is her amazing and almost unparallelled bronze heal. Get her 5 stars, pronto.

When u are above level 55 go for platting, but again no need to be very quick.

Thanks for your reply. From the messages, I understand for most of the heroes stars should be priority. So I will work on it.

Hello Sing, thanks for your opinion, i’m always open to criticism, now;

Even at lower levels i didnt like matador, he was meh before with quick games but now with prolonged games he has almost no damage and easy to take out quickly. Though i agree at lower levels his heals might be considered ok.

Razorback is good for end game, so golding him should be gold. I, myself am very happy to kerp him on reserve he does good when needed.

With Keel, after careful thinking i believe you are right. Making her at least 5 stars and golding is good imo. Yep, her gold skill is not good no more still golding gives overall power increase.

Thanks for the platting info, i didnt even remember that. Being 70 for a looong time and now 75 at last.

For first one i believe getting nightingale skin would render matador useless as you would gain a heal wave. You can use him if you wish, but i strongly believe he was better before and that he is not good for current prolonged battles. Enhance Razorback more, you wont be disappointed. Btw for clyde, you definitely need to control him yourself (no auto) and to protect him via support and healers all the time. If you can manage this he can be a devastating dps. Things get worse after pvp champion ladder. Not much dps to choose as healers and supports rule the arena. Work for your dogface learn to play him efficiently. That is a must when u arrive end game.

I believe try to be vip 1 and get 10x crate whenever you can. If u encounter special crates regarding heroes you can consider them too. (Caine, panzer, ifrit are awesome especially)

Thanks for your reply. From the messages, I understand for most of the heroes stars should be priority. So I will work on it.

Sure I am happy to comment and help where I can

Here is a list of things that I would do if I had your roster. This is in the current state of the game of course. If there are any balance adjustments then things might be different.

The entire purpose of my suggestions below is to build up a strong CORE TEAM which you can use to get victories, advance quicker, level up quicker and generally become stronger. It is my belief that these things will help you quicker in general.

There are heroes in the PVP store that I would not touch: Castellan, Cast and Pris. Some people like Cast but I think there are better heroes out there, I seldom lose against a team with Cast, however configured.

The heroes I would buy with spare frags from the PVP store are Matador, Clyde and Ghoul. They are useful from time to time, but they are not near tier-1 and you should prioritise the others I mentioned.

Your aim with the PVP store would be to acquire as many frags as possible for Mandrake and 1 other hero to access Heronium as a long term aim. Hence, it is not advisable to try to star up too many heroes as that will delay you.

Maven, Callidus and Cinder, Butter, Ghoul, Salvatore, Hardscope and Sentry (only at Gold) are tough ones - they are useful and quite good. But I cannot honestly say that they are top tier. So I would say, give them second priority after the others I listed above.

It is true that only Colonel Wesson is available now without buying crates and the rest are only available through crates.

Hence you have to acquire gold by doing all your daily quests and doing as much PVP as you can to get a chance for PVP crates to drop gold. Also, participating and ranking well in PVP tournaments also gets you a decent amount of gold.

Again I appreciate your help. That gained me some good sights of the game. You are right about my main squad, Dogface, Flatline, matador, nightingale, mandrake gets me some good wins. Remaining heroes only gets me some frags for kills rather than wins mostly.

From now on I will try to increase stars for my main squad and not invest in weaker heroes as you mentioned. I have 125/160 frags of Heimlock and unfortunately couldn’t unlock him. I am also looking forward to see Panzer, Ifrit crates so I can try my luck. I currently have about 2200 gold and I am VIP2. As a first investment bulk hero crate (10x) was best choice to do I believe, so I did that. But not sure if it is still good choice for second try, because I may still get weaker heroes that I will not ever use. However it may help unlocking Heimlock on the other side.