So, its been some 454 days since I started playing and now, literally I have uninstalled the game. Here’s some feedback of my time here.

PvP - I’ve never been a fan of PvP (What???).
Well that’s actually a lie. When I started playing I loved PvP. It was great, tactical and win or lose, a lot of fun. Now at over 800k team power and level 90, it’s the same old. Min/Maxers galore, people heavily reliant on drake in most battles. It’s become so tedious and not as tactical as it was when I started playing that I just don’t want to play it.

That’s all fine if I don’t want to play it, but, there’s loads of good rewards in PvP. With PvP being the way it is nowadays (as mentioned above) I’m happy with throwing any old team together, letting it play out on auto and seeing if I win or lose.

This was fine to do when playing on an emulator (as I’m mostly at the computer desk anyway). I could just put a team together, minimise the window, get on with what I need to be doing and then pop it back up in 5 minutes time to see the outcome and repeat. Fine.

On mobile phone though, if I can see the battle is a losing one, I have to sit there watching it play out, draining my battery for a minute or so watching my team get finished off, or, push the game to the background, bring it back up a few minutes later only to see the game has totally crashed, requires a “force stop” and reload. (More on that below).

War - It’s good fun, enjoyable enough but it’s way too much. Surely once or twice a month is more than enough?

Patrols - Bleh. Even though it’s good to get the rewards, it’s a tedious part of the game.

So these are possibly more annoyances than bugs.

Lets say I get onto 2-1 when I have no energy left. I minimise the game to the background and later come back to use the energy I accumulated while I was away. I bring the game back up, press missions, chapter 2 hard is already there (no scrolling to get to it), press 2-1 and use up my energy. Sometimes when I press that quick win button the game freezes (on screen button presses in and nothing). Requiring me to force stop the game and reload.

If I have to reload the game because of a freeze or because my phone has wiped the ram to use on something else (So full reboots when I opened it again), when I go to missions, hard… The screen is at chapter 14… So then I have to scroll all the way back to chapter 2 to resume my farming… Annoying!!!

I was running the game on a Pixel and now a Pixel 3.

This was kind of disheartening with playing the game for various reasons including the way I play PvP these days.

The devs have spent money on getting studios to record the voices and the game has lots of other sound effects and music. I can’t enjoy any of these on my phone as I play muted (Because I’m normally doing something else like watching TV when playing on my phone). On my computer I have a decent sound system set up which was great to enjoy the game in all it’s glory.

It makes war much better (instead of having to type orders on a phone touch screen, it’s easier on a computer keyboard).

While not officially supported, it sucked that since the August update, the game doesn’t work with emulators at all.

Emulators do not give anyone an unfair advantage, they just make the game more user friendly (and avoids crashes and freezes experienced on a phone as with emulators, the window can be minimised) and it’s easier to record footage of gameplay on a pc for uploading places such as youtube.

For a while I had been feeling this game is a total grind and indeed, the more I progressed, the more it became even more grinding. Farm heronium, do same old gauntlet battles, do patrols, get a few bits of gear, play same old Co-Op battles, play PvP to qualify for any reward.

The emulator situation for me has just killed off any remaining interest and love I had for the game. 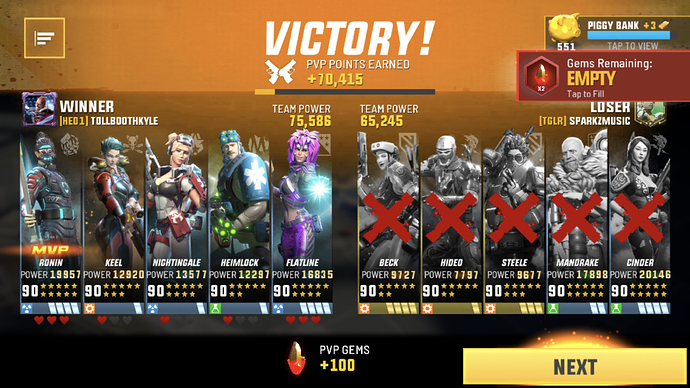 Yeah I do but I think at that time I had lost something like 12 battles in a row because of people relying on drake and min maxers (when I had been picking teams I wanted to play with and control) so it was more desparation. Certainly not a way I wanted to or enjoyed playing but it was forced.

Yeah it does, emu’s no longer working has been the final straw. Weather it was intentional or not. It’s a very dumb move as they wasted possibly thousands of dollars getting voice recordings done and barely anyone on mobile devices plays the game unmuted. That budget could have been used to fund better gameplay features.

Anyway, roll on mario kart at the end of the month. Hopefully my new go to game I will be spending my HH budget playing.

you say you hate mandrake but use him lol.

The irony here is palpable

On a serious note though, it is still a valid opinion to hate min-maxing & drake, but still do them both. At the end of the day, everyone wants to win. I’m allowed to use a cheap strategy but still hate that the cheap strategy gives an advantage. Those aren’t necessarily mutually exclusive.

I too have a confession. I hate Ronin Min-Maxer, but I also love cheap PvP gems :-D.

Yeah I have Kyle, I don’t deny that but thats the thing, I was forced to.

When I started the game I picked hero’s I liked and it was about seeing what the opponent had on the loading screen and planning who I’m going to control and what the strategy was. That was fun.

It got to the point at lvl90, that nearly every single team I faced were either min/maxers or Drake teams. So every PvP battle involved the same tedious strategy and I became bored of PvP altogether.

As I didn’t want to play PvP anymore because of this, but equally, I didn’t want to miss out on the event rewards, it was easy to just throw random teams together in bluestacks, let in run in the background and see the outcome a few minutes later.

Yes, I did use Drake teams but sometimes that was just via random clicks or, after 18 losses in a row, needing to get some points on the board and figuring I’d have more luck on auto with Drake in the team than not.

In the screenshot you sent, I didn’t have any idea I even faced you. From the alliance I was in, that was recent random presses to put the team together and swiping out of the game on my phone until battle had finished (C’mon, would anyone intentionally play a team that I did? No healers, no shields, no energy hero’s). Which isn’t a viable way of playing anymore because of game freezes when trying to bring the game back up on my phone.

It’s the same as before when I beat you with Drake. Random team selection and I didn’t even know I faced you that time until you said in VIP chat.

Why do I have the feeling of deja vu? I swore I saw this post somewhere before…

@The_Green_Goblin I’m going to have to respectfully disagree here.

When you spend months (even years?) on a game like this, it becomes a part of your everyday life. And then as you watch it slowly fail to meet your expectations more and more, I don’t think it’s unreasonable to want to share that sadness with the community and express to the devs how you feel they’ve let you down.

I’ve seen quite a few retirement posts, and I actually really appreciate that people post them here because it often brings to light some of the underlying issues with the direction of the game. But more importantly, it affirms in a more tangible way that some development decisions directly result in players leaving the game. I think it’s a good way for players to vent their broader frustrations and, in my opinion, it’s a healthy reminder to the developers that the some of the less user-friendly decisions have very direct consequences.

Spyro666 you probably saw me mention retirement in a thread over the August update, where emulators stopped working with the game. I stayed as we were partly through a war season and the team commander said they really needed my help.

The fact in the matter goblin is it’s like Papa_Marsh says. I don’t expect anyone to give a stuff I’m leaving and I don’t care. I don’t want any well wishes or people begging me not to leave. When I retire from a game I always do a feedback thread as I would have spent a long time playing the game and want to give my 2 cents which may or may not help with development in the future.

I did exactly the same with the last long term game I played (Animation Throwdown), which after around 2 years of playing, I decided to retire from. I made a thread in the feedback section of the forum, gave a detailed overview of things, ways the game could have improved and generally the feedback was appreciated.

I’ve played Hero Hunters solidly almost every day for around 1 and a half years. For me to play a game for that long, I’ve seen changes, updates, some things I liked, some things I didn’t.

Retirement feedback is like saying “Thanks dev’s. I’ve had some good times with the game and some bad times. Now it’s time to move on to something else. Here are my final thoughts, take them on board or not, I don’t care, but I feel it might help in future game development”

If everyone is retiring for more or less the same reasons, of course it feels the same. I feel that way too. But logically, I know they are diff people.

Well said!!! That’s why I’ve left and until things change I’ll be gone got email so thought I’d check what was being said