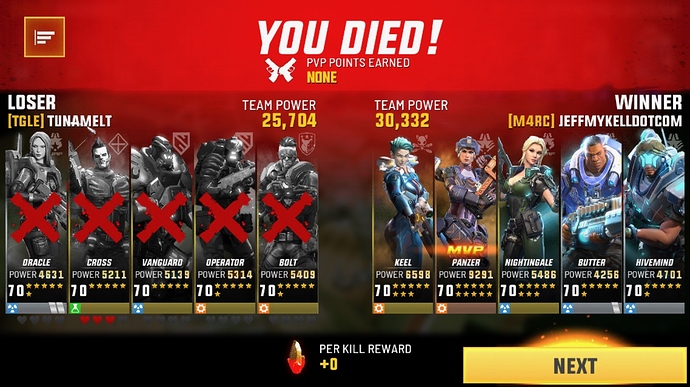 First off, I’m not trying to disparage what Jeffmykelldotcom is doing, good on him to find a min-max combination that works for him to take first place, it also must take a tremendous effort to get there.

I know the devs are working on matchup solutions, however I can’t believe that this is what they had in mind as the spirit of competition, I don’t believe that this is the type of team they should reward as the being the most advantageous to get first place. The PvP power matchups are a mess right now, and the bonuses are ridiculous.

@Tunamelt, you are not alone, Right now as it is a more balanced team being punished and getting match with an OP and higher power team. 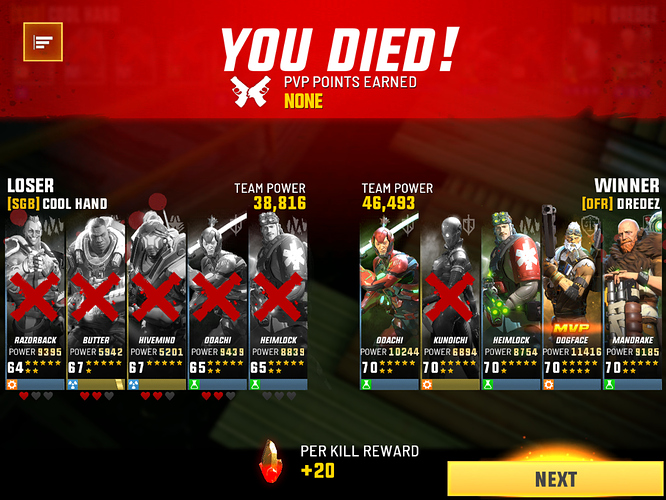 @Tunamelt Nice that you took screenshot. I faced this guy playing this team twice and my team was around 25K as well and lost both the times. My team was more balanced but I am not sure why I was matched with 5K higher team. If there is any unbalance, it is in his team and he should probably get matches 5k-10k higher. 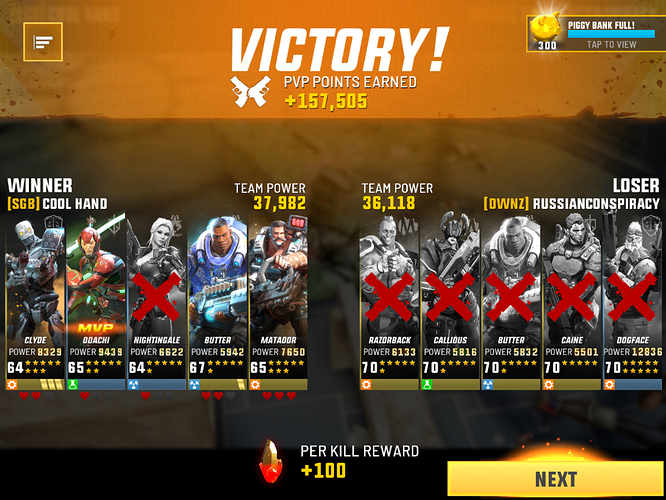 Why was this spoof not matched with a much higher power team ? What’s with in non congruence of matchmaking…

No, you have the right to go beast mode on him and the devs. You’ll even curse the devs once you look at the skill levels of his characters. severely underleveled. some of them not exceeding lvl10. Not only did the matchmaker decided that you must be matched to a higher powered opponent, majority of his power levels come from base stats. They said that they’ll punish these players, but the opposite happened. At least before they “improved” the matchmaking it the power delta was still winnable. But now not only i’m getting matched to a team with max power 100% more than the min, they have more stars, and more levels than me. It’s rage inducing.

Even the bots try to get there share of min-maxing 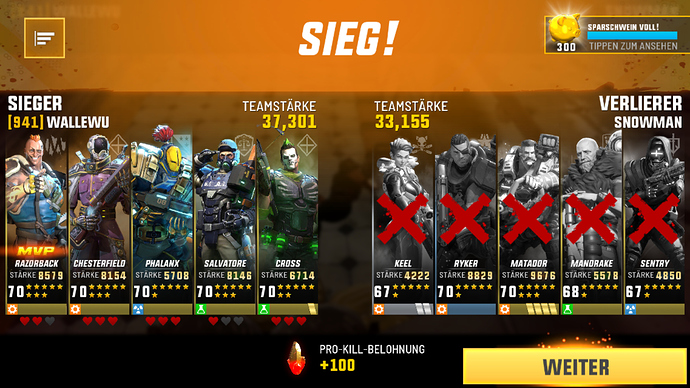 It’s not whining it’s about the abuse of fair play system which can be easily remedied by the devs. Not to mention the lack of consistency in the matching. The balanced teams gets penalised whilst the abuser gets away with it,

The game is a grind as it is. As the spoofing and abuse of the game system becomes more rampant. More will keep away from the game.

If the devs are serious about balancing the game, They need to make the effort and stop all the abuse. 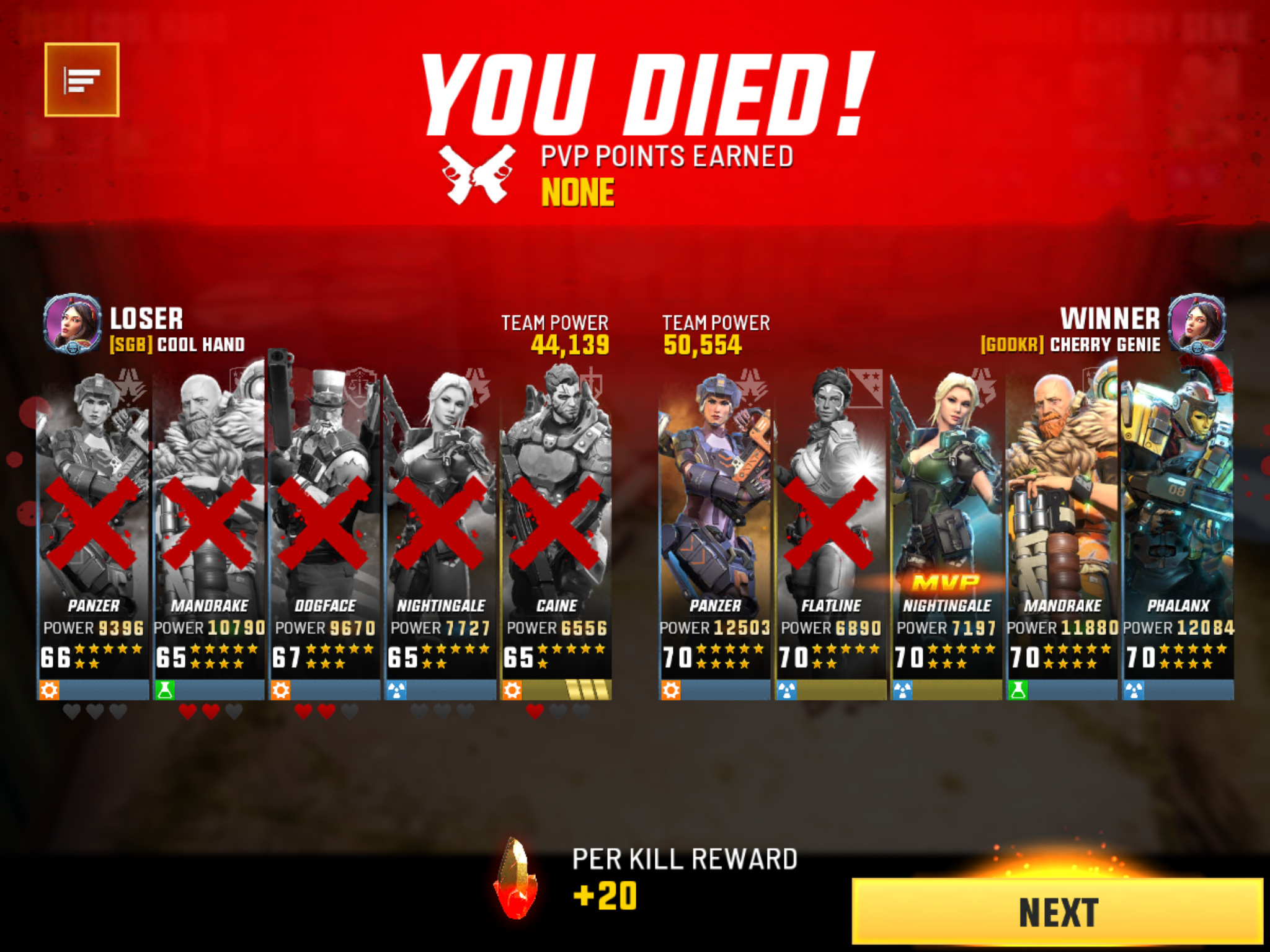 PVP is still broken ! Come on Devs get your act together. 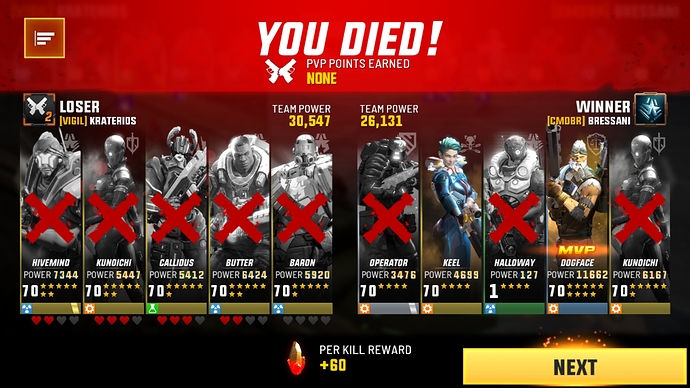 If a prerequisite system is in place. The green Halloway would not even b there. And he would need to run gold 2 for the plat and min of 7* for the 9* DF.

Can someone enlighten me? Is min-maxing a legitimate strategy that’s why the devs are doing nothing about it? Or is it just a bunch of people abusing the system?

PvP has become not a battle of skill now, but a battle of who can min-max the best. It’s just baffling that they can address all the nerf complaints about Panzer (as they should), remake PvP with the Role Warfare thingy, release new skins, etc. BUT, they cannot address this problem (if it is even one) that has been plaguing the community since forever. A lot has been proposed to address these (I’m too lazy to link the specific forum posts haha) but nada.

I included screenshots of three consecutive games I had, all of which were againt min-maxers (7k Panzer with a 3k Baron and 4k Nightingale; 7.8k Ryker with a 2.6k Halloway, 3k Panzer, and 3k Keel; and a Plat Nightingale with a 3.2k Panzer). Like WTF? I feel confident saying that I’m using a fairly balanced team (with at most having only a 700 power difference).

Tell me to git gud or something, but this is bullcrap.

You are too kind buddy. You should show us who those suckers are.

Here’s the best one yet.

inb4 I used a revive on my Panzer for more PvP points haha; Yes, my team has a rather large power difference now (1.6k), mainly because I’m using leftovers. Still, it doesn’t compare to an 8.9 Plat Panzer coupled with two greens at 1k.

@FDParan Sadly I deleted the screenshots after uploading them

Here’s one without a censor on the enemy name though. Sorry I don’t want to reveal my name because I’m a lowly scrub

included screenshots of three consecutive games I had, all of which were againt min-maxers (7k Panzer with a 3k Baron and 4k Nightingale; 7.8k Ryker with a 2.6k Halloway, 3k Panzer, and 3k Keel; and a Plat Nightingale with a 3.2k Panzer). Like WTF? I feel confident saying that I’m using a fairly balanced team (with at most having only a 700 power difference).

I like how in the second screenshot you actually won, even though all of his heroes were less than 5k power except the 8k Ryker. This also serves to highlights just how terrible some characters are in PVP, while others (Dogface, Mandrake, especially Panzer), can carry teams.

I was actually discussing this with an alliance member earlier today because he was showing different hero load outs and bragging about how good he does in PVP with them. I quickly pointed out that most of his heroes weren’t very good in PVP (Rifleman, Fischer, Bolt), and told him he must not be in very high brackets to be doing well with them. He responded by telling me he is really good at PVP and knows “tricks”. This got a good chuckle from me since I looked closer at his load outs and he was mostly using 4-5* silver heroes coupled with a few 7-8* golds. Basically min/maxing and gaming the system.

I tried to explain to him again the heroes he linked wern’t actually good in PVP and that the only reason he is doing so well is because he is taking advantage of the system. My point being he isn’t doing anything particularly sneaky or clever, he is just abusing a system the developers currently haven’t fixed. If he tried to use a team with Fischer, Rifleman, Nightingale, Bolt, and Mandrake all at gold or plat rank, 7-10 star he would get destroyed. I know because I have faced teams like that and they are easy pickings. The only reason it works for him is because his 8* gold Drake and NG are being matched with easier opponents to account for the rest of the team being 4* and silver.

I like to know when are the devs gonna do something about te abuse of min-max spoof. And why are the balanced team being penalised ! 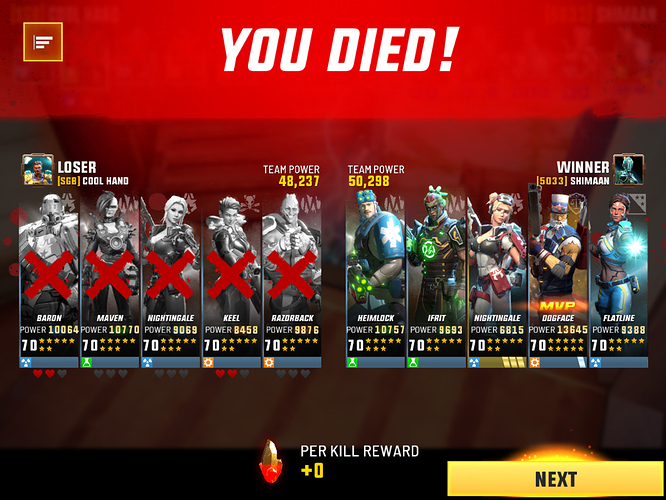 Honestly I can’t see any min maxing. 2k difference at this level is not really a big disadvantage

I agree, these pics are making me confused.

He’s running probably what he’s got.
If I run my 10* Dogface in PVP I have to run along with 7* and 6* heroes. It’s just me playing what the game gave me to play with, not an attempt to cheat the system.

Would it be okay if she would be Platinum? Because he is trying to get her to there. Nightingale has the lowest overall power in the second lowest power level in the game. She will always be way below the others.