We’re proud to have one of the best communities in gaming. We’ve gotten to know many of you over the years, through VIP Chat, on Discord, and here on the forum. We thought it was time to share a little bit about us, so you can get to know the people who make Hero Hunters.

It’s time to meet the devs!

Fave Hero: I like Ghoul. He loves 2 things, explosives and his dog. I also like the attention to detail on his Mummy skin, where the dog becomes a skeleton dog.

Fun Fact: I once met and had an impromptu lunch with David Suzuki. It’s not every day you meet a childhood idol and they turn out to be every bit as amazing as you believed. Also, as much as my English teacher protested against it a “jiffy” is a legitimate measurement of time.

Explain your name: I’ve always been a big fan of Norse mythology. Huginn and Muninn are Odin’s ravens. They represent Thought and Memory. Odin worries that Muninn, Memory, may not return to him one day. It reminds me that I need to make and cherish my memories while I can because one day I could lose them. I think that’s something a lot of people worry about.

Fave Hero: Hideo! I’ve been a fan of ninja ever since I was a kid. If there’s a ninja in a game, that’s who I’m playing as, whenever possible. I’m also a fan of flying elbow drops, so Hideo is a natural pick for me.

Fun Fact: I’m known around the office as the “sword guy,” because I attend a historical fencing academy and regularly spar with steel weapons.

Explain Your Name: Huginn came first. I was the second mod on the forum, so in keeping with the naming conventions, I chose Muninn. Huginn and Muninn were Odin’s ravens in Norse Mythology. Muninn means “memory” in Old Norse. Considering that I read every single forum post and prepare feedback reports for the rest of the team every week, it’s a fitting name!

Fave Hero: Cinder! She was the first Hero I really upgraded, and I really love her design.

Fun Fact: Before working in video games, I previously worked in healthcare for almost 7 years!

Explain Your Name: Following the Norse Mythology theme, I picked Skathi. Skaði (Skathi) is the Norse goddess associated with bowhunting, winter and mountains. Thought it worked well with Hero Hunters

Fave Hero: I used to love the Tick growing up because of the cartoon, But then I started watching Spider-Man and have been a Spidey fan ever since. Oh… you mean my favorite Hero Hunter… I like Chesterfield because of his lore. Seems awesome that there is an old man in a wheelchair somewhere piloting around this robot hunting down the most dangerous game.

Fun Fact: I never had any type of formal schooling for this career. I just kind of fell into a job at Disney working on Club Penguin and through hard work got to where I am now.

Explain Your Name: The movie Hackers was one of my favorite movies growing up. It got me really interested in computers and how they work. Plus “Lord Nikon” is the coolest of the hackers in it. HACK THE PLANET!

Fave Hero: Dogface, because augmenting your gun with attachments is the coolest skills in the game.

Fun Fact: The movie, Grandma’s Boy, made me want to be a game dev.

This isn’t the entire development team, but these are the team members you’ll be interacting with most often in VIP Chat, Discord, and on the forum. When it comes to news and announcements, if you didn’t hear it from one of these team members, then it isn’t official!

17 Likes
How to get custom pofile pics with your name
Request for the Devs: Cost of extra stamina
tollboothkyle September 11, 2019, 10:47pm #2

Where’s gale/peter/ryker always assumed he was a mod, he acts like it?

Many users who are mods on the community-run Discord have similar icons to ours, modeled off ours. Unless they’re on the list up top, they’re not a mod here.

Nice, you guys seem really cool as the devs. This is a really cool post that ties in the community with the devs.

Really like that you guys did this. Let’s us know you’re real people too just trying to make a living. Thanks for all your hard work and making the game as enjoyable as possible

This is a really cool idea to re introduce you guys to the community. I’ve played and enjoyed the game for a long time. I plan on playing and supporting you guys though the good and ‘rough’ Times… you all seem pretty chill based on the info. Grandmas boy, hackers and Norse mythology … hell ya. And going from healthcare to game dev is a big direction change, impressive. Love the gif Huginn.

nobody wanted an IT Crowd gif? im surprised tbh.

Good to learn about all of you. Even though one of you is a fan of Spider-Man.

Hi Devs! Nice to get to know you folks more.

So we havent seen the real chesterfield yet?

Old man being hired as a Mercenary to hunt down with his Chesterfield robot. 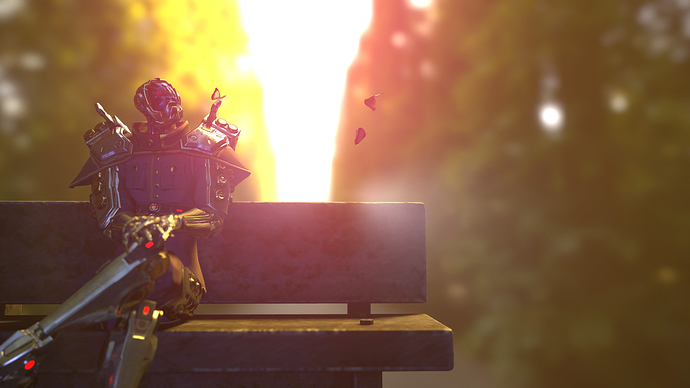 Hopefully none of you are Galante worshippers.

I think you know the answer to that one…

How do we find the lore behind all the heros?

How do we find the lore

You can learn some of the lore by looking at the heroes in the game and their info in there, it might require some detective work though

Hey devs thanks for the post. I enjoyed reading it. Norse ravens is new to me!