Matador has had to many nerfs

After all these nerfs on Matador his silver healing is weaker then gammond his bronze, also his damage just sucks compared to other hero’s (gammond also out ranks him as a damage dealer) his gold is completely useless for PvP.

I used to like Matador, but he is just completely broken at the moment, kind of a waste that I’m 70 fragments short on a 9*…

Totally agree his heal needs to be changed a little. It’s essentially the same as gammonds except it’s a shorter duration with a smaller net heal, and gives armor instead of health, which right now is a pretty lackluster boost with all the damage output heros have. On top of all that, the taunt part only triggers if someone is below the health threshold before the abilty is used, while gammonds triggers when someone gets to that point. Only upside is matador gets the taunt, not a random hero as gammonds does, so it’s a little more predictable.

I’m not sure what a good change would be, but maybe moving his gold onto his heal. Extend the time to 10 seconds, cut the healing to 90% of what it is now, and while its active, if an enemy is killed it triggers the buff. Then change his gold to something similar to barons gold or something.

Also the difference in stats is to big 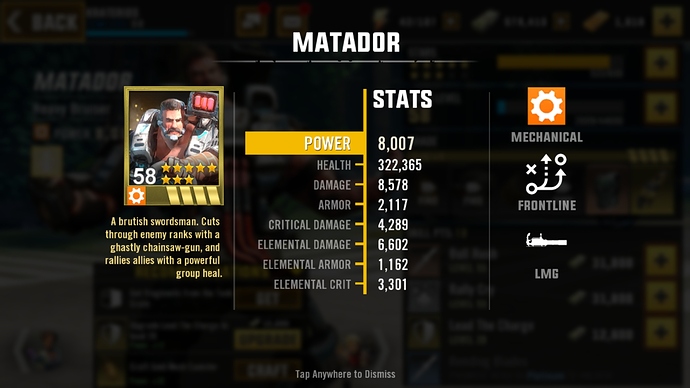 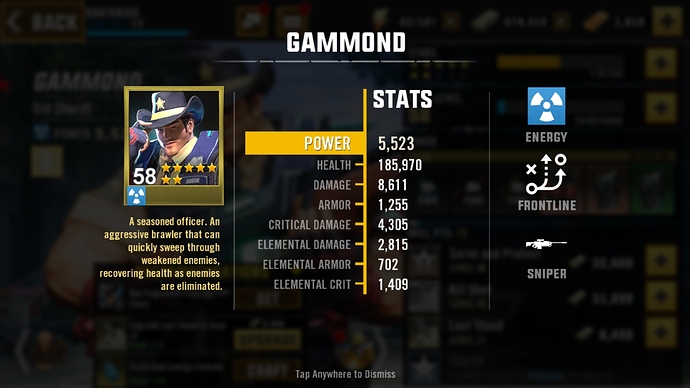 Would be nice if Matador got a little damage boost

Gammond is way too stronge. Most front guys comparing to him is weak.

Matador is not a dealer or a tanker.
Also, fix your gold and platinum skills.
And I want you to buff some Phoenix, too.

You also need to look the “elemental damage stat”

Sure, Gammond has more damage, but Matador has a lot more of elemental damage. This means that, when they attack a weaker element, Gammond will do almost the same damage than he does when he attacks the same element, but Matador will have his damage raised greatly

I think Gammond is the hero with the highest normal damage - lowest elemental damage (at least, he is, out of my 33 heroes), so that makes him better at dealing with Mech enemies, but not as good with Bio-chem enemies as other energy heroes would be.

Matador is a tank, just look at his HP. He hast the highest HP of all Heros, more than double compared to Gammond. He is a tank who has two self healing skills, two skills giving him a shield and attracts damage. There is nothing more you can ask of a tank hero.

Sure he is not the best PvP char, but hes great at PvE. And to be honest, there is no good PvP hero, because the dealt damage in PvP is just to huge.

And dont forget that you can get hards for free and through the PvP store every day.

Well, the double hp could be because of the extra star and extra gear. Maybe if they have equal strength, the HP difference isn’t that huge, but the difference in damage will be even bigger. I think he is trying to point that Gammond has more damage than Matador despite being really undeveloped.

But yeah, I agree that Matador is a great tank. He can heal, taunt, shield and destroy covers really easily, due to his big magazine.

The difference is a 8* gold 4 compared to a 7* gold, gammond heals more with his bronze then matador does with his silver skill. that’s why I think it’s weird that Matador doesn’t heal that much. 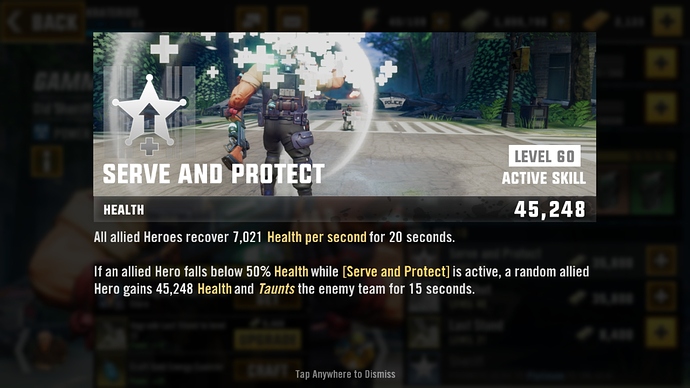 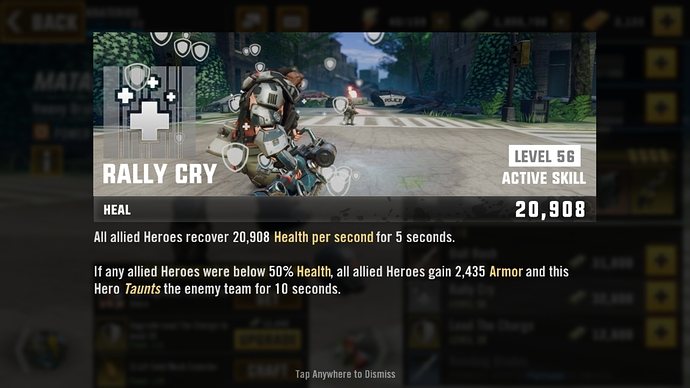 I really think Matador should heal more, my gammond is of better use in the dojo damage and health wise while the difference is 2* and 4 gold

I totally agree to this. Nerfing to the ground is a bad habit of game developers. Players invest in characters for certain expectations. Matador is one of the more solid entry level characters that can bring you far in campaign + a bit of competitiveness in PVP while farming for other toons. He’s probably the most useful mech healer? Are there even other mech healers?

He’s becoming not as useful as before and it makes me wonder if this continuous nerf is even warranted aside from to push people to buy other toons.

Are there even other mech healers?

Keel does a great job healing, given she can swap targets during her heal. And her gold ability can be a lifesaver.

Hardscope can heal while bringin high damage to the table

Operator is the last mech healer, who can be a pain to kill once he hits gold. But his heal only affecting one target at a time makes him unreliable.

In my opinion, Matador is a great mech healer, second only to Keel

İ also agree with you. He is tank. HP of Matador is highest.

He can take a good punch but his damage is really low, his healing is low and his attack skill is weak.

His silver is good enough as a side/emergency heal, in my opinion. And it’s true that his damage is somewhat lacking, but I don’t think he is in such a bad spot, to be honest

@GTSaiko, You are all over the forum. Do you know how to play PvP? If you did know, you would have tons of tickets from pvp crates.
Why people express their opinions on things they don’t know about?! lol
Matador is not like he used to be. I don’t know the reason. I don’t use him in pvp much, he sucks lately.

Also, I don’t know why you deduce I’m not doing good in PvP. Why would you think that? Are you assuming I suck at PvP just because I have a different opinion from yours?

He isn’t that strong in pve either, he just has a lot of health, but that’s it, in PvP he gets wrecked in seconds so I don’t know how you use him to shine but I’d like to know that, I know it isn’t dojo cause 2 stars and 4 gold less still makes gammond better

In PvE, his high HP pool made him the only hero in my whole rooster able to survive 7-2 Kunoichi kunai barrage, so he made possible I could 3 star this map, for example. No other hero could survive that huge burst of neutral damage, not even with Heimlock’s gold skill

Don’t get me wrong, I don’t think he is strong, and I think he could use a buff, but I don’t think it is as bad as you make it sound. Also, Matador is one of the easiest heroes to evolve, given that you get 3 shards daily, can buy fragments from PvP store, and you get a bunch of shards from Achievements, so he being average may be intended, since he is so easy to farm

I’m currently on 9-5, those 3 shards I get from Matador don’t make such a big difference when you fight a lot of PvP, so I think we’re kinda missing each others point