I switched alliances today. I had a ton of rewards from the past 2 bounties I hadn’t collected that were lost. Had I known this was going to happen I would have collected them. Is this a glitch I need to report or is this an intended thing. Incredibly disappointing if this is intended. I didn’t lose other unused rewards, so I shouldn’t lose these.

It had happened to me time ago, when u change alliances all the rewards are lost. Doesn´t seem to exist a way to collect the rewards where the whole alliance was involved, only solo events rewards stay even changing alliance tho, so unlucky for u bro.

It’s happened to me before as well. Count it as loss and move on. Bounty is tied to Alliance events, so when you switch alliance, everything associated with that prior alliance will be gone. It sucks, but take it as a learning experience.

All honesty it’s on you. You should always claim rewards when you get them. Of course you wouldn’t get the rewards you got in another alliance when you left it. Why would you be able to?

Why were you holding on to month-old rewards? It’s always advised to claim rewards as soon as they’re available. They would have eventually disappeared anyway.

It’s my fault that I lost rewards I helped earn because I switched alliances? Hardly. Where is a TOS that supports this? There is no communication at any time, including in the email that the request to join has been accepted. Would be nothing to add a note to collect all rewards before leaving within that email. If there were then my stupidity for not reading. How I choose to spend is not relevant. The rules give a clearly delineated timeframe and I follow that.

It’s not a surprise that it’s not written anywhere. Everything apart from gameplay are not prioritised. Many rules and mechanics have to be discovered on your own.

For e.g., did you know you could apply for another alliance while in an alliance without leaving it while applying? You can, but you wouldn’t know unless you tried because of the misleading warning popup asking you if are you sure since it would mean ‘leaving your alliance’ when in reality nothing kicks in until you accept that alliance’s acceptance letter upon acceptance.

Also the alliance reward thing being tagged to alliances means you could be unjustly kicked from your alliance after contributing a lot to it and lose everything. Alliance leaders are free to abuse members. They could kick a member immediately after an event to prevent them from collecting anything.

You would have lost bounty rewards if you didn’t collect them after a certain time anyways. Always collect rewards ASAP.

Like I said, I’m well aware of timeframes because they’re clearly visible. How I spend rewards isn’t relevant to my question. The fact that the loss of rewards when switching alliances is an intended consequence, not a glitch, is relevant. One that is a concern for me.

Thanks for your feedback regarding lost rewards! We recommend players always claim rewards immediately, as swapping Alliances will remove any rewards you had waiting for with that Alliance.

Do you want us to remind you to take your clothes off when you take a shower too? 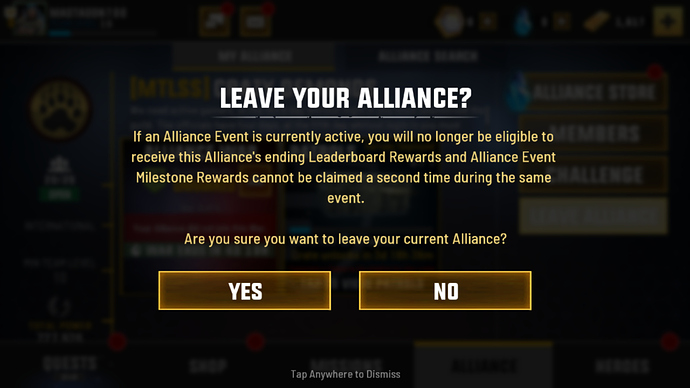 If the rewards are tied to the Alliance which you’re a member of at the time, maybe add a line to this warning telling people to collect ALL Alliance rewards before leaving or you WILL lose them.

Yes it is your fault I’m sorry that you don’t think switching groups you got the rewards with and expecting them to be there with some other group claim your rewards when you get them no problems. If you don’t claim them HH can’t do anything about it they are lost forever

That would be a simple solution. The events were finished and they were in my banks, so to speak, along with other pvp events which are still available.

Where is this recommendation? I didn’t see any such recommendation anywhere. Again, if you can direct me to some screen within the game, so be it. Someone suggested adding it to the screen about losing alliance rewards if you leave the alliance during the event. I think we’re all aware of this because it there to read. By not broadening the statement one can reasonably deduce if you wait until after the event to leave you can keep your rewards. Why? Because it only says you’ll lose if mid event, not post event.

I can understand your frustration. I’ll pass your suggestion along to the rest of the team.

I would also urge you to re-read the forum FAQ/guidelines, as getting aggressive with other players is not permitted.

I got aggressive? With who? Where? If your referring to my straw man post, is not that person’s condescending, unrelated response about showers far more aggressive. I’ve attacked no one here. I have debated. If we’re considering debate aggressive, that’s concerning.

Here, this is the link I was referring to:

Make sure you read it all!